How I Shot That: High Contrast Lighting in the Sundance Zombie Romance-Comedy 'Life After Beth' 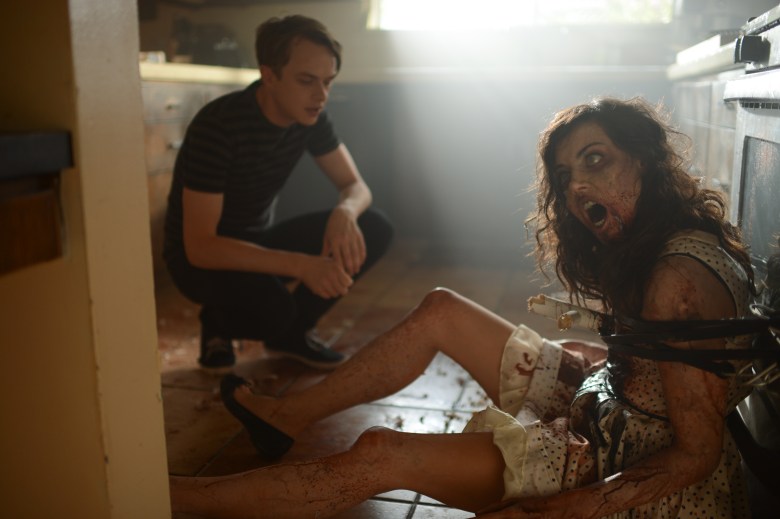 Cinematographer Jay Hunter told Indiewire about the zombie romantic-comedy “Life After Beth,” the directorial debut of “I Heart Huckabees” co-writer Jeff Baena and an entry in the Dramatic Competition of the 2014 Sundance Film Festival. The film stars Dane DeHaan as a young man whose girlfriend (Aubrey Plaza) returns from the dead following a hiking accident. Hunter’s previous credits include “Much Ado About Nothing,” “Dollhouse,” and “Paper Heart.”

Which camera and lens did you use? Arri Alexa, Canon 5d MkIII.

What was the most difficult shot on your movie, and how did you pull it off? The most difficult sequence of “Life
After Beth” was absolutely the final scene in the attic with Zach (DeHaan) and
Beth (Plaza) after they come back from the beach. It’s incredibly simple. Two
people in a small attic…they make out…it turns a bit ugly and Zach
escapes through a dormer window. The director Jeff Baena wanted it to
feel very moody with the actors entering pools of light and then
receding into pure darkness. Moody, high contrast lighting is always
the most time consuming because you need to be very specific with the
angle of the cameras in relation to the angle of light or else you’ll
have half your shots look moody and the other half look bright and flat.
Cross shooting with two cameras is very difficult in this situation as
well as you then have very few choices of where you can put your lights
and still maintain a dark mood.

We had just finished shooting the climactic “Canyon” sequence earlier
that day and were very behind schedule. Additionally, we were all
covered in dust and exhausted from a long week of work and a brutal
first half of the day getting cooked by the sun. Once we were ready to
shoot the nighttime attic set I was informed that we only had 25 minutes
to shoot a two page scene that was fairly complex in terms of
blocking. What was even more difficult was the fact that the set we
were working in was a four wall set with essentially zero way of
entering or exiting the space without removing a ton of set dressing.
We designed the attic to have the limitations of an actual small attic
(in order to restrict ourselves from “cheating” by using lenses and
sources of light that would have been impossible if it were a real
space) but I think that we went a bit too far. Regardless, there was
nothing left to do but shoot the scene then and there because we had to
tear down the sets in 30 minutes and get the production out of that
sound stage lest we incur hefty fees/fines. Ahhh, independent
filmmaking.

My only option was to suck it up and cross shoot the scene with our A
& B camera in handheld mode. Shooting two pages of script can take
anywhere from 2-10 hours of the day depending on how complicated the scene
is. If we didn’t cross shoot we would never have time to get the
coverage of both actors. In terms of lighting I simply brought in a
directional soft source through the “whirlybird” vent (Joker 400 with a Leko attachment) and supplemented it with a 4kw book light to bring in
some very non-directional soft ambiance through the dormer window. Once
we had those lights up there was no more time to tweak the lights or
make adjustments. We loaded the cameras up with fresh cards and
batteries. The 1st ACs took positions next to their monitors outside
the set and Guido Frenzel (B Cam Op) and I shouldered up and shot
nonstop for 25 minutes until we had the plug pulled.

Read More: How a Zombie Film Ended up in Sundance Competition

In the scene there were a ton of props being thrown around and Aubrey had
to partially disrobe by the end of the scene. There was no time to
“re-set” the set dressing and have wardrobe and makeup come in and
re-set the actors. Once we had finished
one take and were ready for another,  Guido and I would put our cameras on
the ground, Aubrey and Dane would start dusting themselves off and we’d
all chip in to reset the props. It was pure mayhem. The entire time
I’m praying to the Film Gods that at least some of it is in focus and
that you can see the actors amongst all the darkness.

Finally, once he had the right performances on camera, Jeff called cut
and the 1st AD called the wrap, Guido, Aubrey, Dane and I emerged from
that evil dark hole of a set soaked to the bone in sweat and covered in
dust and dirt. We did not look pretty but we huddled around the monitor
to see just what the Hell we had actually shot. It looked incredible
and we all exchanged big smiles. Nailed it.

Who is your favorite cinematographer, and why? This is a hard question because how am I to say that Jack
Cardiff is better than Douglas Slocombe or that Roger Deakins is better
than Lance Accord? They are all my heroes. That said, I think that Sven
Nykvist is my all time favorite cinematographer. There’s just
something about his minimalism and use of soft light that lulls me into a
hypnotic trance every time. Though he worked with countless amazing
directors, I look at his collaboration with Ingmar Bergman and I dream of
having a similar lifelong creative partnership.

What’s the best film school for an aspiring cinematographer? Or is it necessary? Film school is simultaneously worthless
and invaluable. You don’t have to go to any film school to start
making films. You learn more on one day of being on a “real set” than
in four years of film school. That said, you’ll never have another time
in your life that you watch hundreds of films and discuss them with a
20-30 or your peers. Sure you’ll go see a movie and then talk about it
with your friends but in a classroom you are engaging with huge variety
of people that don’t necessarily share your views as well as with people
that you might never be friends with or interact with in ordinary life.
It’s crazy to think that on a normal day in film school 12 years ago I
might watch a Kenneth Anger film, a Fred Wiseman doc, an Iranian slice-of-life drama, and then wrap it up with “Seven.” The next day we’d spend
an hour discussing each film from all different angles of critique.
When are you going to ever do that again?

Do you think the shift to digital is good or bad? People like to overdramatize the
whole film vs. digital thing. I learned how to edit by splicing 16mm
film together and I think that there is something perfect about learning
the craft by actually physically handling the imagery. Film is
beautiful and organic and gentle. That said, it’s also a huge pain in
the ass. There are several advantages to using film that will never
become obsolete. Unfortunately, for the film stock manufacturers, the
advantages that digital cameras have over film are now far outweighing
the benefits of the celluloid system. The only real major downside I see with digital is encapsulated in this
analogy: If you have a machine gun and you are trying to hit a target
you’ll hold that trigger down and fire a million bullets. Eventually
you’ll hit the center of the target but you’ll make Swiss cheese out
of everything around it. If you have three bullets and a revolver you are
going to take your time and really aim that gun perfectly before you
shoot one of your precious bullets. That’s film vs. digital.

What advice do you have for cinematographers who want to get to Sundance? Shoot as many things as you can. Make friends with good
directors. Shoot everything that you can for them. Don’t make
decisions based on money as much as you can. If you have the choice
between a project that pays well but isn’t very good and a project that
doesn’t pay at all that is amazing….take the amazing one.

What’s the best career advice you received? Don’t be afraid to make things look
ugly sometimes. Just about everyone in town can light up a pretty
picture. If you make everything pretty then your movie will look like a
shampoo commercial. Don’t succumb to the pressure of making everyone at Video Village ohh and ahh over your shot. A movie isn’t a shot…it’s
thousands of shots. Sometimes your movie star is going to have to look
like shit when they walk through that alleyway because that’s how people
look when they walk through alleyways. A lot of people next to you at
the monitors will shake their heads at bold choices but when they see
the movie hopefully they’ll think differently.

And the worst advice? The worst thing anyone in the film industry can ever do is
convince themselves that they are so important that they can’t be
replaced. I’ve seen it happen to everyone from PAs, to actors, to producers, to directors, to myself. As soon as you convince yourself
that you are so important to a film that the whole thing would collapse
without you a poison seeps into your brain and it will ruin you
eventually. I believe they call it hubris. Stay humble and remember
that the PA next to you is just as important to the production as you
are.

Editor’s Note: The “How I Shot That” series is part of the Indiewire and Canon U.S.A. partnership
at the 2014 Sundance Film Festival in Park City, where we celebrated
cinematography and photographed Sundance talent at Canon Craft Services on Main Street.

This Article is related to: Toolkit and tagged Cinematography, Filmmaker Toolkit: Production, How I Shot That, Jeff Baena, Life After Beth, Sundance, Sundance 2014