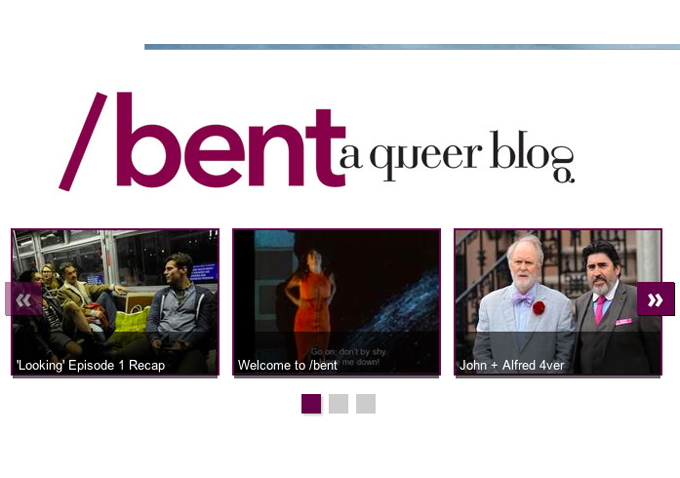 Indiewire is more than happy to welcome a new addition to the blog network, /bent, which is now officially the queerest blog around these parts — we’d like to think — the most fabulous.

The blog is the brainchild of longtime Indiewire Senior Writer Peter Knegt, who brings with him Matthew Hammett Knott (of Indiewire’s “Heroines of Cinema” and Oscar Bitchfest fame), Berlin-based Toby Ashraf, London-based Sophie Smith and Toronto-based Oliver Skinner. And what exactly will they be doing? Well, here’s a mission statement of sorts:

Who needs a queer blog? Possibly not you, in which case, feel free to avoid. But for those even mildly intrigued, allow us to explain what we are offering.

/bent is an irreverent look at how queer culture is represented on film and in other media. Whether we’re talking the heights of lesbian cinema, the lows of TV stereotypes or the latest politician’s homophobic outburst, we will tell you how we see it, and will encourage as many other voices as possible to give their perspective, whether it chimes with ours or not.

Our content will be both current and retrospective. Our daily output will naturally be dictated by what’s new and worth discussing on the contemporary media landscape and news cycle. But beside that, we plan to provide an accumulative overview of how queer culture has arrived at its current form. From features such as “Token Gay of the Week” and “Rewatching The Queer Canon” to profiles of more inspiring figures, the history of queer culture — both glorious and shameful — will be central to our content.

This isn’t a gay ghetto. We’ve heard the argument voiced that a queer blog isn’t needed in this day and age, and contributes to the ghettoization of queer themes from mainstream discussion. We disagree. There are times when gay culture thrives on its integration with the mainstream, and times when it demands its own space. But that’s the beauty of the internet. Where appropriate, our content will be integrated with the rest of the Indiewire blog network, not to mention the online conversation at large. At other times, we’ll do our own thing. But the queer theme is more a matter of convenience than marginalization. Hashtag this — we’re here and we’re queer when you need us.

We are just one part of the conversation. We’re not claiming to be comprehensive, either in terms of coverage or experience. We’re committed feminists who believe in intersectional politics, and well aware that we’re as limited (or otherwise) as the diversity of our authors and output. But new writers are always welcomed, new angles strongly encouraged. Regardless of your background, not least where you lie on the sexual orientation spectrum, we hope you’ll join us.

This is going to be fun. And we can say that with confidence because if it’s not, we’ll stop doing it. Yes, we plan to be politically engaged, but it is our firm belief that a queer perspective is a fundamentally liberating way to view the world, and we hope our content reflects that sentiment. Let’s get the party started. Head over to /bent now for dozens of queer-related content. And feel free to follow /bent on Facebook and Twitter, and if you are interested in contributing in any way, shape or form — we welcome it. Email Peter Knegt at peter@indiewire.com with your pitch!