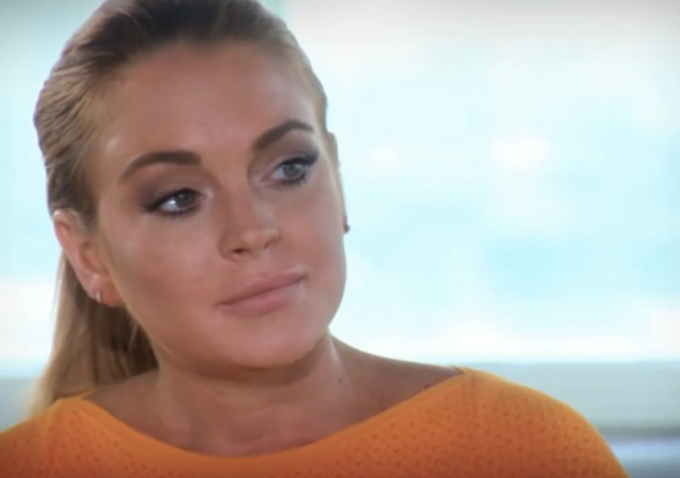 OWN announced premiere dates for three docuseries, including “Lindsay,” in which filmmaker Amy Rice (“By The People: The Election of Barack Obama”) attempts to document Lindsay Lohan’s recovery process after her sixth stint in rehab and her interview with OWN founder Oprah Winfrey.

The New York Daily News’ gossip section reported this morning that Lohan had delayed filming on the series to the point where the producers are worried about completing it. The trailer the network presented at the Television Critics Association this morning (which hasn’t been put online) made this development part of the narrative, with footage of Rice expressing her exasperation about Lohan’s constant cancellations and rescheduling. Lohan is shown talking about feeling like a prisoner and expressing concern about the paparazzi following her to an AA meeting. “There’s nothing left in having a drink for me,” she says. “There’s no party I haven’t gone to, nobody I haven’t hung out with, no situation I haven’t been exposed to.” Oprah is shown intervening and telling Lohan she’s okay with calling off the cameras if Lohan wants.

Also announced today by OWN was a new scripted series from Tyler Perry, who formed a partnership with Winfrey in late 2012 to provide OWN with fiction programming. “Single Moms Club,” based on Perry’s upcoming movie starring Nia Long and Wendi McLendon-Covey, is a drama centered on a group of single women from different walks of life who bond after an incident at their children’s school. The series, which will premiere in fall 2014, is Perry’s fourth at the network. Here are the show synopses:

Brought together by an incident at their children’s school, a group of single mothers from different walks of life bond and create a support group that helps them find comedy in the obstacles of life, and inner strength to overcome their personal challenges.  Tyler Perry’s “Single Moms Club” is written, produced and directed by Tyler Perry and is produced by Tyler Perry Studios.

The highly anticipated OWN documentary series “Lindsay,” directed by Emmy-nominated filmmaker Amy Rice (“By The People: The Election of Barack Obama”), follows movie star and media sensation Lindsay Lohan on her journey through recovery following a very public period of crisis.  Lindsay is one of the most talented young actresses of her generation, boasting an impressive list of credits (“The Parent Trap,” “Mean Girls,” “A Prairie Home Companion”).  Having had her career and personal life sidelined by her public struggles, Lindsay is strikingly candid about her life and is more determined than ever to get back on her feet.  In this honest, no-holds-barred account, viewers will see an intimate, unflinching look into the life of one of the world’s most sought-after celebrities.  Cameras follow Lindsay as she returns to New York, reunites with friends and family, and attempts to build a new life.  As she works to stay on track amid the demands (and pitfalls) of fame, she opens up as never before, discussing everything from her emotional recovery process to her exhausting run-ins with the paparazzi.  The series is produced with OWN by Pilgrim Studios and is executive produced by Craig Piligian, Nicholas Caprio and Johnny Gould.  Amy Rice, Ralph Wikke and Mitch Rosa are co-executive producers.

“Deion’s Family Playbook” is the fun-filled and compelling real-life story of Deion Sanders, the only pro athlete to ever play in both a Super Bowl and a World Series.  Few people know that Deion, best known as “Prime Time,” is a single father raising five kids of his own, while also helping to raise four other children who live with him, including the twins whom his mother cares for, his niece and nephew and a student in need whom he recently took into his home.  Additionally, Deion is co-founder and football coach of Prime Prep Academy, a charter school that aims to make a lasting impact on the lives of children in underserved areas. With so much on his plate both at school and at home, Deion strives to keep all facets of his complicated, crazy and chaotic life in balance and under control.   Help is on the way every other week when his girlfriend, Tracey Edmonds, a Hollywood producer who has two sons of her own, comes to visit.  The series is produced by Edmonds Entertainment, Prime Time Media Ventures and Rogue Atlas Productions in association with Lionsgate Television.  Executive producers are Eli Frankel, Tracey E. Edmonds and Deion Sanders.  Co-Executive Producer is Rob Cornick.

Kiyah, Bershan, Chenoa and Tiffany have known each other for more than ten years, and are constant sources of inspiration, support, competition and companionship to one another.  Kiyah, an ambitious and successful celebrity hair stylist, is the link who brought the four friends together, and New York City’s legendary Harlem neighborhood is where the quartet come together on a regular basis … over drinks, lunches, dinners, you name it.  Two are married, two are single, and all are strong and fiercely independent women who believe in living out their dreams and not letting anyone or anything get in their way.  Through the group’s adventures, misadventures, romances, successes and life-altering struggles, they may not always see eye-to-eye, but when push comes to shove, they are there for each other with solid and unwavering support as they each face their own unique challenges and triumphs.  The series is produced by CORE Media Group.  D’Angela Proctor, Jen O’Connell, Rob Lee and Lenid Rolov are executive producers; Paulina Williams and Glenn Stickley are co-executive producers.

Check out all our coverage of the Winter 2014 TCA press tour.