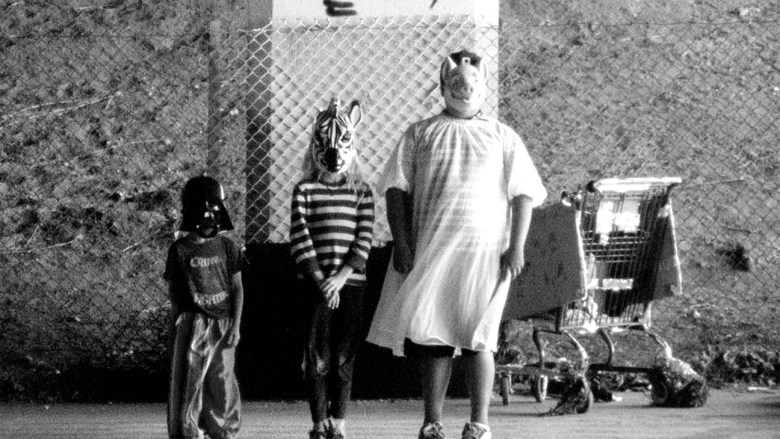 Barely an hour long and blatantly made on the cheap, Alexandre Rockwell’s “Little Feet” conveys greater emotion and poignancy than most movies released last year; it’s also a terrific start to this one. Opening the Museum of the Moving Image’s “First Look” screening series today ahead of its exclusive release on Vimeo in March (you can pre-order it online starting tomorrow), Rockwell’s tender black-and-white portrait of a young sibling pair (played the filmmaker’s kids) evading their bleak home life with a freewheeling outdoor adventure plays like Jim Jarmusch and Wes Anderson teamed up to adapt “Peanuts” into a live action feature. It’s a soulful look at the innocence of childhood as a safety net from life’s harsher truths.

Rockwell’s project, which features his adolescent daughter Lana and preschool-aged son Nico, bears a marked similarity to like-minded DIY filmmaker-musician Cory McAbee’s 2012 feature “Crazy and Thief,” a magical realist street-based musical adventure also starring his giddy children. Both movies showcase a strong-willed girl looking out for her carefree brother at every turn, while the strange dangers of the adult world lurk just outside the edge of every frame. But while “Crazy and Thief” took cues from its young protagonists’ daydreaming, “Little Feet” eloquently contrasts them with the tragic connotations hovering around their existence.

From the first images of a goldfish set to whispering dialogue of the two children, it’s clear that the characters’ mother has passed away; minutes later, we catch glimpses of their deadbeat dad, who wastes his days working a lame gig wearing a panda costume and hits the bottle after hours. Without speaking a word, the father figure in “Little Feet” is, like their late mother, an abstraction in their lives, though Lana’s somber expression whenever she isn’t distracting her playful brother constantly suggests that she possesses a greater yearning for release. After sobering encounter with death — in this case, from the passing of their goldfish — the duo find their salvation in the arrival of a portly neighborhood boy (Rene Cuante) with a lust for excitement. Together, the team decides to take their remaining goldfish to the ocean and set him free, a mission that comprises the remainder of an enjoyably brisk tale of catharsis.

Rockwell, an early nineties indie breakout story following his 1992 debut “In the Soup,” recaptures the spirit of innovation that typifies work from that period. Inhabiting his children’s sense of awe as they explore their environment, he frames their bubbly energy with a deadpan contrast drawn out by the expressive cinematography (much of which the director shot himself).

Yet as much as Rockwell emphasizes a certain underlying sadness to the proceedings, he also spins an enjoyably capricious quality of their playtime: An early scene in which Lana and Nico engage in a pillow fight, which culminates with the image of a single drifting feather that the babbling Nico abruptly singles out as their mother’s spirit, echoes the sweet eloquence of Jean Vigo. Later, as the group makes their way down an L.A. street with a grocery cart, wearing dark shades as a rockabilly soundtrack emphasizes their walk, they transform into paragons of cool straight out of the Jarmusch playbook. And as the group surveys the street landscape through a pair of binoculars and Rockwell adopts their point of view, “Little Feet” undeniably echoes Anderson’s “Moonrise Kingdom” as Lana forms a mildly romantic bond with their new male companion and falls for his enterprising approach to their quest.

Even so, Rockwell’s movie has its own rhythm, culminating with lush ocean images that elevate the material onto a conceptual plane. There and gone with the fleeting nature of its youngest character’s attention span, “Little Feet” ultimately feels more like an insightful sketch than a full-fledged movie, but it nonetheless leaves a major impression. Rockwell presents childhood not only through the lens of nostalgia, but also as a form of idealism against impossible odds that’s embodied by the kids, yet accessible to everyone.

HOW WILL IT PLAY? Since Vimeo offered a special revenue-sharing deal involving a $10,000 advance for filmmakers who distribute their work on the platform, we have yet to see an effective case study of the approach working wonders. “Little Feet,” which is bound to attract strong reactions from viewers online, stands to benefit well from word of mouth; it might not generate millions of dollars, but in the context of online-only releases, stands to perform decently when it hits Vimeo in March. Check out the trailer on SnagFilms.

The Museum of the Moving Image’s “First Look” series runs January 10 – 19. Indiewire has also previously reviewed the following titles from the lineup:

“The Rendez-Vous of Deja Vu”