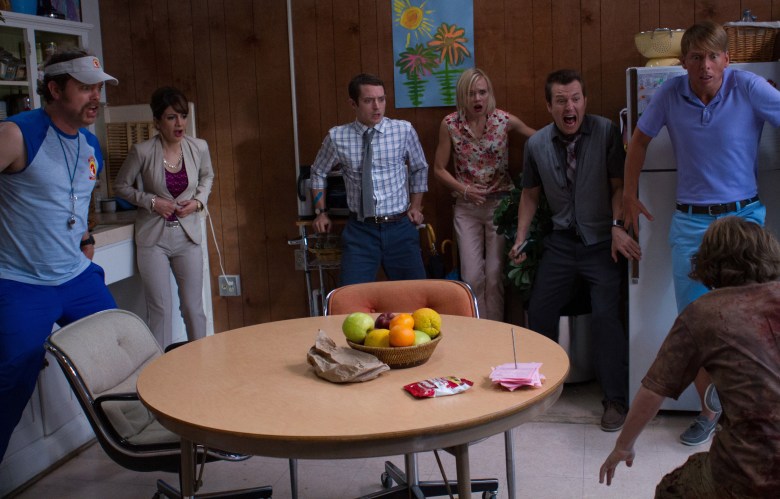 Gore can only go so far in the service of humor. Fortunately, the team behind “Cooties”—which includes “Saw” creator Leigh Whannell” and “Glee” creator Ian Brennan—manage to pit comedy and horror together in a satisfying package. Whannell and Brennan’s unapologetically absurd script pairs nicely with Jonathan Milott and Cary Murnion’s terse direction in this solid midnight movie, where the laughs outnumber the body count tenfold. Yet, when Milott and Murnion dial it up, we forget we spent the last ten minutes cracking up.

“Cooties” opens with a title sequence for the ages. As with most post-9/11 zombie films, the movie deploys a virus that deteriorates the brain to its most primal motor functions and creates an appetite for human flesh. The opening credits roll show chickens being turned into meaty putty and eventually school lunch nuggets. We watch one particular nugget, with oversized black veins like a spoiled shrimp, make its way to a cafeteria in Fort Chicken Elementary. The sequence’s climax is as repulsive as anything since Asami’s dog bowl delicacy in “Audition.” Hello, “Cooties.”

Clint Hadson (Elijah Wood) had been doing the aspiring writer thing in New York. It’s no wonder he’s back, subbing in a summer classroom, when his own mother (Kate Flannery) qualifies her “love” for the first draft of his book with a list of critical barbs that would make a Penguin editor proud. Wood imbues his character with the sort of casual condescension that parcels away self-loathing and failure. On his first day, someone scratches “Eat Cock” on his filthy Prius.

Clint insists his students call him by his first name and starts his lesson place by asking for a volunteer to read the first chapter of his novel and provide feedback. One of his hellion students, Patriot (Cooper Roth)—he was born on 9/11 (a shout out to the roots of the latest zombie craze?)—isn’t entirely out of line when he purposely misreads his name spelled on the board in inadequately spaced all-caps.

The rest of the faculty are typical suburban caricatures. In the teacher’s lounge, Clint tries to reconnect with childhood sweetheart Lucy McCormick (Alison Pill) only to discover she’s dating the gym teacher, Wade Johnson (Rainn Wilson). The ensuing love triangle endows the film with emotional stakes. While each of them are funny—Wilson in particular is given the freedom to utilize his talent for improvisation—the sharpest guffaws come thanks to the riotous Whannell and Jack McBrayer.

He plays Tracy Simmons, the sexually ambiguous art teacher. “Cooties” gives the actor plenty of lively material. Doug (Whannell), on the other hand, spends his downtime in the teacher’s lounge reading “How to Carry a Normal Conversation.” Doug creeps in and out of the frame like an affable Igor, as if finding comfort in the social space were a literal task. When the inevitable virus spreads, as zombie children screech like animals and start eating faces and overrun the school, Doug’s the one dissecting brains and sifting through horrendous bodily fluids, content with being the only one willing (or apt enough) to do so — and with the disposition of a puppy dog to boot.

From there, “Cooties” proceeds as one would expect. Before he meets a grisly fate, Vice Principal Simms (Brennan) asserts the need for students to return to a more natural state of learning; these kids pop Adderall and tap their phones constantly. The surviving faculty hauls up in room to room. Clint and Wade fight over plans. Flap-jawed conservative Rebekkah Halverson (Nasim Pedrad) heckles Tracy about his apparent gayness, which in her world precedes pedophilia. They rescue a couple of uninfected kids. Doug decodes the nature of the virus. Eventually, the militia arrives. Unlike the classic zombie satire of the original George A. Romero films, “Cooties” is surface deep, but functions just fine as a ridiculous amusement that cleverly institutes its clichés. The result is both effectively terrifying and hilarious.

HOW WILL IT PLAY? With mainstay comedy faces, “Cootie” could reach a larger audience than other similar cultish work. It’s the best play on the recent zombie craze, and while not as well-timed as “Zombieland,” it has the potential to match that movie’s success with a wide enough release.