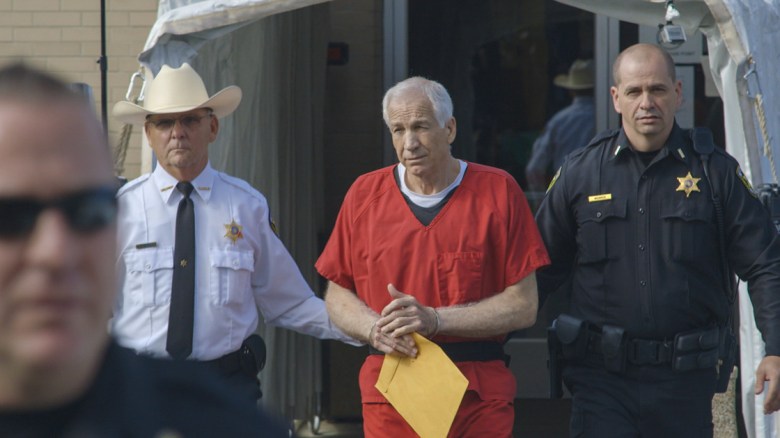 No stranger to movies about scandal, documentarian Amir Bar-Lev has explored the fallout of private misdeeds made public in “My Kid Could Paint That” and “The Tillman Story.” With “Happy Valley,” Bar-Lev turns his camera on the outcome of disgraced Penn State football coach Jerry Sandusky in the wake of his incarceration on sexual abuse charges. But this time, the project indicates few attempts at revealing new information. Instead, “Happy Valley” magnifies the impact of Sandusky’s downfall on the various members of the Penn State community, aiming less to extend the public narrative than to broaden its scope. The result is a frequently riveting, if fairly straightforward, portrait of a university town grappling with its disgraced reputation.

Rather than detailing Sandusky’s extensive sins, “Happy Valley” opens with the former coach’s 2012 conviction and explores the ripple effect of his downfall. Among the many talking heads, none are more intriguing than the grown children of the men in question: Sandusky’s adopted son, Matt, a family man estranged from his older relatives in the wake of the scandal, looks as though he’s using the documentary to workshop his feelings. Meanwhile, Paterno’s sons Jay and Scott recall their father’s vain attempts at maintaining resolve in the wake of the scandal, which culminated with the university firing him mere months before he succumbed to cancer. Collectively, these voices clarify a personal dimension that casts an intriguing contrast with the dry reportage surrounding the trial’s outcome.

But even as “Happy Valley” avoids digging too deeply into the allegations themselves — Sandusky’s guilt is regarded as self-evident from the outset — it provides a solid foundation for the tragic impact on the university’s longstanding reputation. Archival footage tracks Paterno’s startling 61-year tenure, during which he led the team to constant victory, aided in its later years by the grinning Sandusky. Speaking with countless members of the Penn world — including former players and professors alike — Bar-Lev captures the dissolution of their collective self-confidence. There are a handful of regular faces in “Happy Valley,” but it’s the crowd that becomes its main star, shouting its lungs out at games and protests alike, expressing fury and despondence at the same time. No sequence stands out with greater clarify than the riot following Paterno’s firing, described by one witness as the moment “when the state college lost its innocence.”

Yet the constant demurrals can’t stop the trickle down impact of the trial, particularly once a report solidifies allegations that Paterno didn’t go far enough when notifying the university of Sandusky’s abuses. Bar-Lev finds a telling illustration in the ever-changing mural featuring Penn’s football legends at the center of town, from which Sandusky’s face is erased and Paterno gains a halo following his passing — only to lose it after his posthumous reputation declines further. Along similar lines, a Paterno statue that attracts sports tourists becomes an object of derision: Bar-Lev captures one unsettling confrontation between a protestor and various pro-Paterno visitors that neatly illustrates the local divide.

There’s a lingering sense that the filmmaker doesn’t dig deep enough into the personal dimensions of the scandal in his conversations with those close enough to comment on them. Paterno’s widow naturally breaks down in tears while discussing the couple’s struggles in the spotlight, but that much was already self-evident. The harder questions about Sandusky’s ability to get away with his wrongdoings for so long are treated as distinct from Bar-Lev’s focus, but the result is occasionally an undercooked treatment of major components in this complicated web of events.

However, that doesn’t prevent “Happy Valley” from providing a sophisticated analysis of the story’s publicity nightmare. Largely comprised of press coverage, as journalists chase every major figure in the scandal to their doorsteps, “Happy Valley” turns the tables on the national perception of the scandal. Looking directly into the camera after the team has been banned by the league, one supporter shouts, “Stop putting all the bad stuff on TV!” The words resonate for anyone who has followed the headlines from the past several years. Watching “Happy Valley,” it’s hard not to feel complicit in the university’s weakened state.

HOW WILL IT PLAY? With interest in the Sandusky trial still in the air and residual court cases scheduled for this year, “Happy Valley” maintains an immediacy that should make it an attractive propositions for a distributor able to release it theatrically in several major markets; whether the story retains its appeal between and the film’s release is another story, particularly since it’s nobody’s favorite topic and the documentary doesn’t offer any major new revelations.