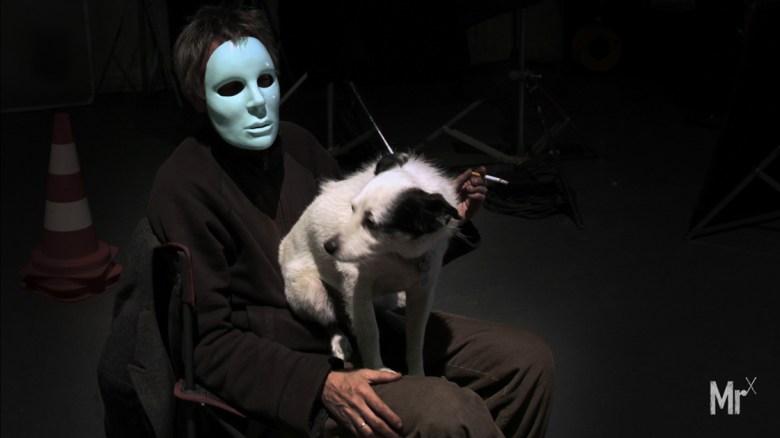 Tessa Louise-Salomé’s “Mr. leos caraX” doesn’t evade the self-congratulatory aspect of exploring an artist at work, but it remains a mesmerizing experience thanks to the appeal of modern cinema’s most enigmatic auteur. Blatantly pitched at an audience already enamored of Carax’s mystique, Louise-Salomé’s documentary doesn’t try to unpack Carax’s films—practically an impossible task—and also leaves aside his personal life. Carax regular Denis Lavant, one of several interviewees in the movie, commenting on the strangeness of playing the lover of his director’s “ex-girlfriend, soon-to-be girlfriend, or soon-to-be ex-girlfriend” is as personal an insight as we get. But since the director hardly speaks on set, it’s hard to get a sense for what we’re supposed to get out of the experience — a portrait of the director or his filmmaking?

Ultimately, it’s about their symbiosis: how one vaporizes the other in a foggy plume of cinema and artistry. The movie careens from one meditation to another. Philosophers, essayists, and contemporaries recount the filmic tremor of Carax’s debut, “Boy Meets Girl,” recalling its feral vision as distinct from anything else. Louise-Salomé includes a portion of Lavant’s audition tape for the movie, in which the actor sports oversized headphones and a smile steeped both in cockiness and naïveté, while explaining to the camera the need to “understand” a character, on an organic, intuitive level. And so we cut to clips of his work.

Lavant’s limitless physicality makes him a perfect on-camera complement for Carax, but it’s the pair’s sometimes oppositional artistry that Lavant credits for their prolific relationship. Other frequent collaborators, such as cinematographer Caroline Chametier and editor Nelly Quettier, elicit Carax’s imperial perfectionism—the compulsory unfurling of “Mauvais sang” and the implosive ambition of “Lovers on the Bridge.”

It’s around this version of him—the obsessive, contradictory mind—that Louise-Salomé structures a period of pushback. Film historians Jean-Michel Frodon and Richard Brody outline the resistance of certain cinephiles to Carax’s work, but Louise-Salomé never lets the documentary stray too far from reverence. For every detour into Carax’s artistic trappings, there’s someone like Cannes festival president Gilles Jacob singing his praises. When one talking head slights “Pola X,” the next exalts “Holy Motors.”

Nevertheless, the documentary certainly does justice to Carax’s talent. Louise-Salomé injects the film with his subject’s fascinating presence, by arranging clips and overlaying images on the artificially decrepit interview sets. Still, she wisely limits the extent to which her documentary replicates Carax’s ambition. This is a straightforward, fans-only project, nothing like the work of its eponymous figure. Louise-Salomé never positions her film as anything but a celebration — which is fine on its own terms. It’s counterintuitive to indict the director for sharing her fascination her movie’s subject.

HOW WILL IT PLAY? With its niche focus, theatrical prospects are limited; one-off screenings or a very limited release in film-friendly cities is possible, though the movie is most likely to find most of its business in the home entertainment market.