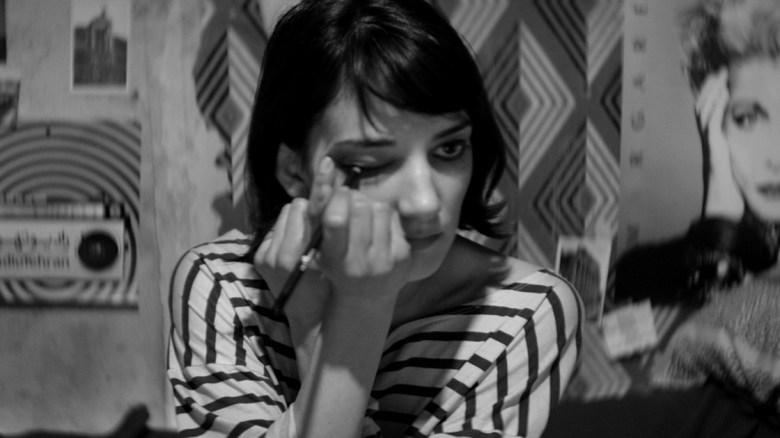 For centuries, vampires have provided handy metaphors for social and physical dilemma, but in the stylishly muted deadpan romance “A Girl Walks Home Alone at Night,” the threat is personal. Writer-director Ana Lily Amirpour’s stunning debut, produced by Elijah Wood, follows the experiences of a small Iranian town haunted by a vampiric presence who’s just as lonely as the other locals. Shot in gorgeously expressionistic black-and-white and fusing multiple genres into a thoroughly original whole, Amirpour has crafted a beguiling, cryptic and often surprisingly funny look at personal desire that creeps up on you with the nimble powers of its supernatural focus. The director combines elements of film noir and the restraint of Iranian New Wave cinema with the subdued depictions of a bored youth culture found in early Jim Jarmusch…the comparisons go on and on, but the result is wholly original.

From the first frame to its last, the movie establishes a spellbinding atmosphere with long takes, deep shadows, and lively music cues ironically positioned against the cerebral quality of the storytelling, hinting at the vitality threatening to burst forth from its lethargic universe at any moment. Set in the fictional Iranian ghost town tellingly labeled Bad City — but actually shot in California — “A Girl Walks Home Alone at Night” initially focuses on the downtrodden plight of Arash (Arash Marandi), a hip young man who wanders the empty streets accompanied by his husky cat. Coping with the destructive junkie habits of his bumbling father (Marshall Manesh) and staving off the oppression of local crime lord Saeed (Dominic Rains), Arash says little but constantly moves around, his grave expression connoting a desire to control of his life. The opportunity arrives in a remarkable sequence in which criminal Saeed takes home a quiet, stone-faced woman (Sheila Vand) he finds on the street, performs a bizarrely tribalistic dance of seduction and attempts to get physical with her — before she drains his blood dry. Arash arrives at Saeed’s home shortly after the incident, discovers the body and jacks his drugs to launch his own street business. It’s his first step toward taking control of his life.

Meanwhile, Amirpour fleshes out the somber life of the mysterious vampire woman, a doe-faced goth who wears a chic striped shirt visible beneath her burka. Though her origins remain obscured, as she trails various locals late at night, she quickly turns into the face of repression burdening all of them. When she traumatizes a neighborhood boy and threatens to watch his behavior for the rest of his life, it’s the first indication of a light at the end of the tunnel, a means of righting the wrongs in this broken world. But it’s not until she forms a curiously moving romance with Arash — whom she discovers drugged up after a late night costume party, dressed as Dracula — that “A Girl Walks Home Alone at Night” truly moves beyond its elegant form and develops an emotional core.

If the movie’s slow-moving pace represent the prevalence of despair, its main characters are gradually woken up my music cues. “Sad songs hit the spot,” Arash tells his latest crush, unaware of her blood-sucking tendencies but smitten with her mysterious solemnity. Indeed, their scenes together develop a palpable romanticism whenever Arash pops in a cassette tape or cues up a record, while classic blues and contemporary indie rock infuse their quiet exchanges with poignancy. As lyrics and melodies inform their otherwise gloomy exchanges (the Brit post-punk group White Lies song “Death” includes the lyrics, “I love the feeling when we lift off”), “A Girl Walks Home Tonight” is practically a musical run through the filter of a European arthouse aesthetic. It echoes many precedents, but as a whole it’s entirely unique.

There’s no doubting the plot specifics that allow “A Girl Walks Home Alone at Night” to comment on the strict dimensions of Iranian society — its treatment of women and imbalance of wealth chief among them — but it elevates these ingredients to an abstract plane. “Idiots and rich people are the only ones who think things can change,” Arash is cautioned by a local. By its end, “A Girl Walks Home Alone at Night” uses its tangible metaphor to reject that very sentiment and transcend the restrictions of its dark milieu.

HOW WILL IT PLAY? A weird foreign language genre hybrid, “A Girl Walks Home Alone at Night” may not be well-positioned for widespread success, but could land niche appeal with the genre crowd if the right distributor is willing to snatch it up and advocate for its distinctiveness.