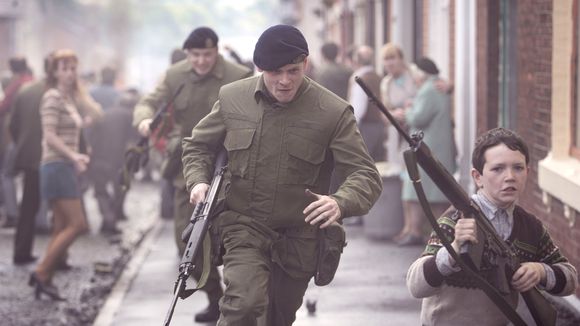 A gritty, relentless wartime drama that blends its action set pieces with palpable despair and historical observation, “’71” maintains a polished intensity that fares well for first-time feature director Yann Demange. Centered on a gripping performance by Jack O’Connell, as a British soldier marooned in a sharply divided Belfast over the course of a single, violent night during the height of the Northern Ireland conflict, “’71” constantly thrills without sensationalizing its surprises. The war-is-hell ethos drives it forward, so that the movie retains its suspense in conjunction with its dour outlook.

It takes a whole lot of story before O’Connell’s character — the grave-faced Gary Hook — injured and holed up with a veteran Irish soldier who takes pity on the wounded man, receives an encapsulation of his tragic circumstances: “You’re just meat to them,” the former battlefield medic says of the Irish army, and the events of “’71” prove it: After a brief prologue in which Gary prepares for duty by assuring his young son that he has nothing to worry about, the young recruit finds himself thrust into a cold, brutal existence.

Following a harsh training session that echoes “Full Metal Jacket” in its blend of vulgar directives and harsh physical ordeals, Gary and his cohorts receive a cursory debriefing of their mission into Belgrade: separated into the ostensibly hostile Catholic nationalists and Protestant loyalists, the troops launch an ill-fated operation to neutralize the area and wind up at the center of a chaotic protest. The second act lifts off when an Irish activist murders one of the soldiers, forcing Gary to go on the lam, which separates him from his troop. From its hectic crowd scenes, “’71” abruptly shifts into claustrophobic thriller mode, following Gary as he dodges bullets and takes shelter in an alleyway, the first of many close calls.

The movie’s constant forward momentum leaves only the slightest room for backstory, but Gary remains a sufficient object of sympathy while various dangerous interests swirl around him: As his superiors mount a mission to recover their lost man, factions from the other side scheme to bring him down, facing insurrection and disagreements of their own at the same time. Cutting between Gary’s plight and the handful of gun-toting nationalists on his tail, “’71” barrels ahead, eventually arriving at a tightly choreographed showdown in which several allegiances are called into question. Uncertain who he can trust and ultimately forced to fight a handful of men solo, Gary’s plight echoes the climax of “High Noon,” and similarly carves an effective political metaphor out of its one-man-army scenario: Literally bringing a knife to a gun fight during the tense showdown set around the exteriors of an apartment building, Gary becomes a killing machine by virtue of the only option at his disposal.

While a few overly neat developments in the climax distract from the otherwise satisfactory conclusion, “’71” never loses hold of its bleak approach. Like “Full Metal Jacket,” the brash nature of the training process is echoed in the ineffectual violence that comes next, but Demange deals with a factor not at play in the Vietnam war: imprecise battle lines littered with treachery at every turn. It’s never entirely clear who’s working together or harboring an agenda for the other side, even as multiple parties clamor to take Gary down.

O’Connell, also the star of the brutal Irish prison drama “Starred Up,” again illustrates his robust physical presence here as a naturalistic action hero, hinting at the prospects for bigger projects in his future. But it’s Demange’s firm direction that gives the character’s situation a sense of frantic possibilities under dire circumstances: There’s a Kafkaesque element to his wanderings through the shadowy, labyrinthine streets that takes the proceedings beyond their historical specificity. With the arrival of a sudden bombing, “’71” creates the morbid feeling of dangers lurking around every corner, with the mounting dread emphasized by jittery camerawork and a throbbing score.

When the action slows down just enough for dialogue that extends beyond gruff, hollered exchanges, Gregory Burke’s brilliantly economical screenplay doesn’t mince words. At the mercy of a man who puts his life in danger to help him, Gary is completely removed from the political stakes of the struggle between the British government and the Irish Republic. It’s at this moment that the older man explains the circular nature of the battle, using this memorable description of the army’s circular tendencies: “Posh cunts telling thick cunts to kill poor cunts.” It’s also an apt summation of Gary’s conundrum: At a certain point in his long, treacherous night, the idea of defeating an enemy no longer signifies a triumph. The serenity of the movie’s final image implies that his personal victory can only arrive when he finds an exit from the madness.

HOW WILL IT PLAY? While its thick accents necessitate subtitles, “’71” contains enough impressive filmmaking and serious themes to garner interest from a distributor willing to play up the emerging talents involved in the production. While not poised for wide release, it should enjoy healthy festival play and strong reviews in limited release.