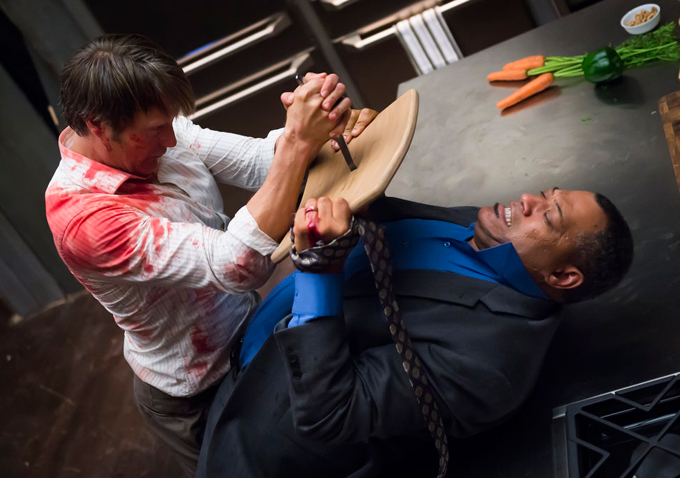 “Hannibal” returns for its sophomore season this Friday, February 28th at 10pm on NBC, and its opening moments (teased online earlier this week) already have the legions of Fannibals begging for more. That vicious fight between Jack Crawford (Laurence Fishburne) and Hannibal Lecter (Mads Mikkelsen) is the perfect way to introduce the critically acclaimed show’s return to primetime television.

Early episodes in the new season show more of the same gritty gore, psychological terror and cat-and-mouse games between Lecter and the now under suspicion Special Agent Will Graham (Hugh Dancy) that made the first year of the show so delectable, but it’s the presence of a new character (Michael Pitt’s Mason Verger) that makes this second course so intriguing. Indiewire sat down with showrunner Bryan Fuller to get the scoop on what to expect from the show’s new season and to speculate on where Thomas Harris might be hiding out. 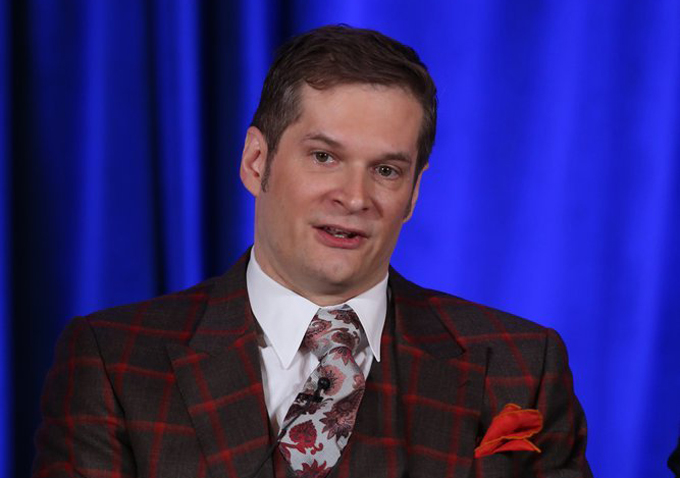 Were you nervous about getting the second season callback?

Nervous? No. I thought that we knew exactly what the second season was going to be. We had set up so many story elements that you will see as you watch the second season — things that you thought were ended or unresolved will come back in season two and resolve themselves in (hopefully) a satisfying way.

There are a lot of outstanding mysteries and questions in season one that do get explored in season two, so I felt like we had an abundance of material to explore, especially getting into the more honest dynamic between Hannibal Lecter and Will Graham where they know what each other is. It has a more direct honesty to it, and that felt exciting.

The ratings for “Hannibal” were not great, but NBC stuck with it.

I think they realized that the show just sort of popped up in a blip on a night against a great white shark and a killer whale that were taking chunks out of us, in terms of the man-eating competition. I think they realized that the show didn’t necessarily get a fair shake at things in the first season and they’ve certainly gone above and beyond to try to rectify that.

I think the recognition is so much higher this season that it’s going to increase the ratings for you. I hope so, anyway, because I really want a third season! 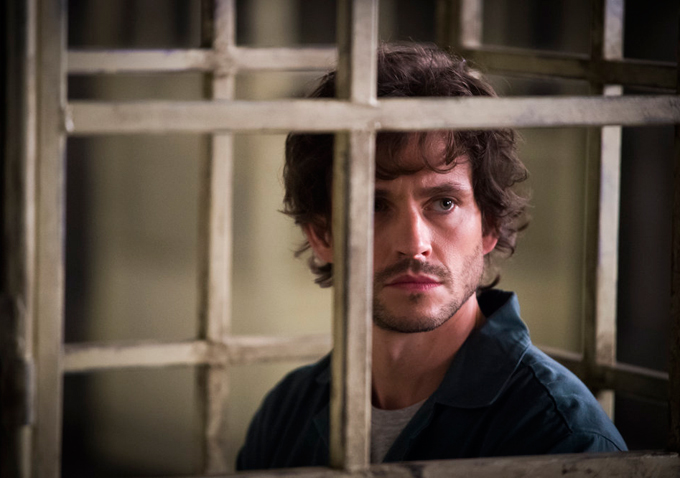 Was there pushback from NBC to change or tweak anything based on last year’s success?

There was a call at the beginning where they said, “If you did less gore, that would be great by us, but you have to make the show true to the source.” So they were very clear that they didn’t want to de-fang us in any way, but they also wanted to make sure that they could protect us against their own programmers and those who dedicate money to marketing. Those people look at the show as inopportune for their purposes.

Have you spoken with Thomas Harris since season one ended?

No! I haven’t had a word with the man. In fact, I’m not even sure he exists.

I thought you had talked to him before season one. You didn’t?

No. [Executive producer] Martha De Laurentiis passes along messages every once in a while. I believe she’s done so twice so far. I’m assuming he’s either a ghost or he’s in a zipper mask with a ball gag in a steamer trunk in Martha’s basement.

This season kicks off in a pretty risky, very visceral way. Were you worried at all about giving away too much too soon?

Honestly? I wasn’t because I felt like we had so many moves during the season that were as exciting (if not more exciting), and it felt like the logical conclusion to the Jack Crawford/Hannibal Lecter relationship would be a knock-down, drag-out fight of some sort.

And also, for me, after we had done Hannibal Lecter vs. Tobias Budge in episode eight of last year, Laurence approached me and said, “You know, I’m really good at fight sequences too.” [laughs] 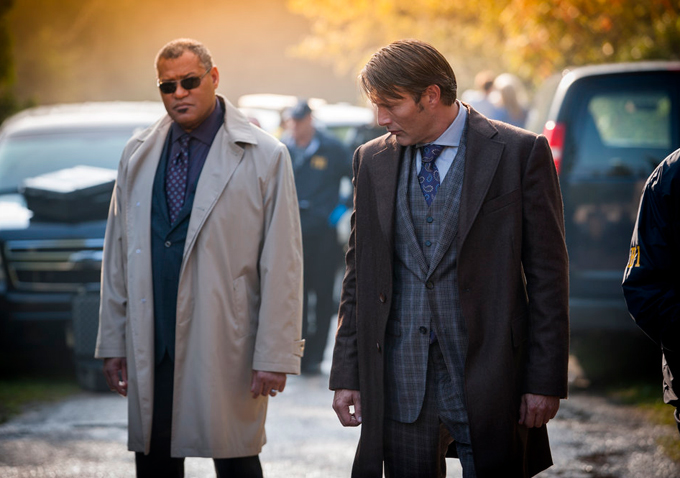 You announced Michael Pitt joining the cast earlier this year. Tell me about Michael’s version of Mason Verger.

He’s kind of a pimp. [laughs] He’s styled within an inch of his life. When you meet him, he’s in this white fur coat and he looks fantastic. He’s got this shock of hair and he’s with pigs. We know Mason Verger is a very charming guy. Even when he was terribly mauled in that wheelchair he’s a purple character, so he has a tremendous amount of humor and with that goes the charm.

I was so giddy after I saw the dailies because Michael is pitch perfect, knows what show he’s in, and has great chemistry with Katharine Isabelle, who plays Margot Verger. It was really fun for me to see. Also, it’s this other character that’s in the mythology of Thomas Harris’ novels and it felt like we were playing a different note than what we had been playing earlier this season, so it felt like a breath of fresh air. 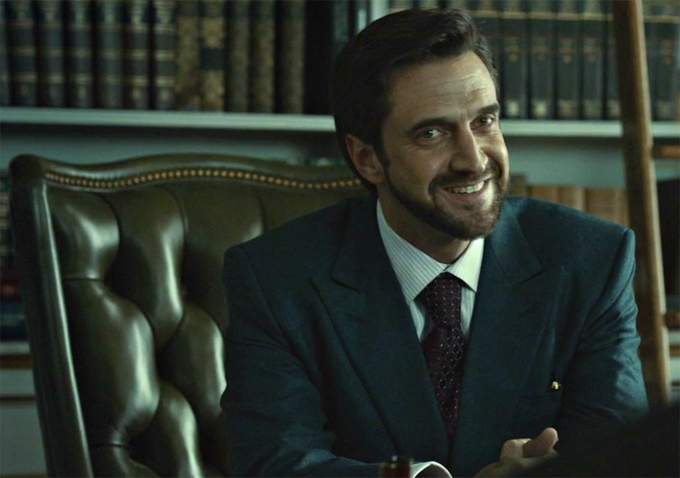 Any hints as to what other new characters we might see this year?

Raul Esparza is also back chewing scenery as Chilton, and bringing such fun to the character and the tone of the show because he’s playing a different instrument than all of the other musicians in the orchestra. It’s really fun to have him back. And a bunch of others. There are quite a few actors that are new characters. Seeing so many faces return from the first season in really unexpected ways is cool too.

Can you let Ellen Greene sing over a dinner scene or something?

I know! It’s another actor where I was like, “How do we get Ellen back on this show?” So I’ve been trying to figure that out too, but I don’t know if we’re going to see her again in the second season.

Any luck with getting MGM to loosen up the reins on the Clarice Starling character a bit?

I think after we finish this second season and it airs (because Clarice would still be a season or two away), I would be curious to check in with MGM to see if they’re still holding fast to that “what’s ours is ours and what’s yours is yours” approach or if the Clarice Starling series is still happening for them at Lifetime. 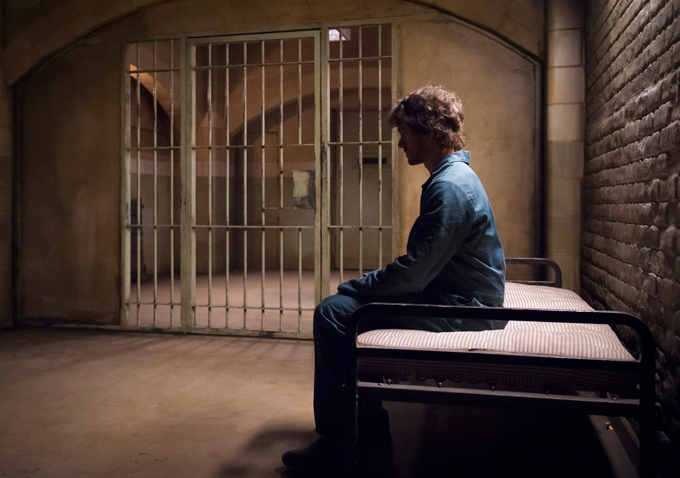 We’d have to find out what the status of that is because I think what would have to happen is that MGM would have to come to some sort of agreement with Gaumont in terms of some way that would be mutually beneficial. MGM isn’t just going to let us use the character without them profiting from it in some way. Nor should they, actually. It’s just business. But I would love for those two studios to work out some way for us to have “Hannibal” be the all-inclusion, canonical adaptation of the literature. Even though we’ve strayed from canon quite a bit, we’re still pure in terms of tone.

And the through-line sticks even though you take some detours along the way.

Yes, we do take quite a few detours and that’s part of the fun. It is like the reboot of “Star Trek” in that an event happened and all events that precede from that event are slightly altered. That event, for us, is Will Graham going to therapy with Hannibal Lecter.