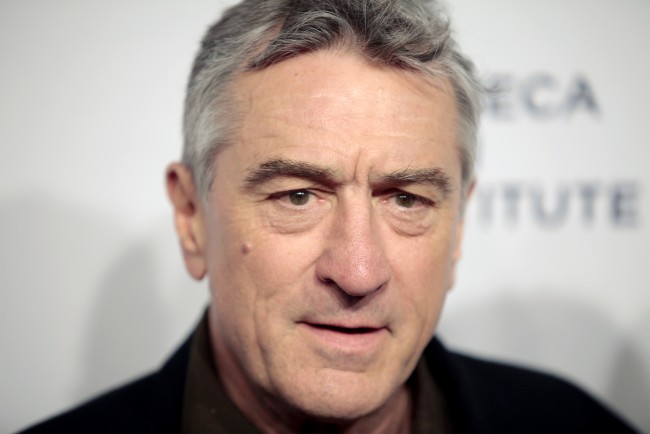 On Monday night, the Tribeca Film Institute hosted a special screening of Robert De Niro’s crime drama “A Bronx Tale,” which is celebrating its 20th year since first released. The event, held at East Village Cinema, began with a cocktail party (kudos to American Cut for the steak tartar), followed by a showing of the film and a special Q&A with “Bob” himself.

“A Bronx Tale,” based on the one-man play by Chazz Palminteri (who also stars as Sonny), follows Calogero Anello, a nine-year old Italian boy who worships local mobster Sonny and his not-so-threatening posse. After witnessing and then lying about a street murder, the young Calogero befriends a thankful Sonny, much to the disappointment and jealousy of his hardworking driver father, played by De Niro. It’s a sweet and film, often funny, dark and insightful.

The real treat; however, was a special Q&A with De Niro right after the film. Here are five highlights from the session in which De Niro speaks openly about directing, acting and “the bullshit” of getting lost in a role.

Following “A Bronx Tale,” De Niro went on to direct the 2006 film “The Good Shepherd,” written by Eric Roth and starring Matt Damon and Angelina Jolie. The film opened to mixed reviews and performed decently at the box office.

4. On Comparisons To “Goodfellas:” De Niro had starred in seven Scorsese films before the release of “A Bronx Tale.” When asked about the comparisons between the two, De Niro asserted that “Marty will do his thing and I’ll do mine.”

The comparisons obviously come from the fact that both films are about mobster Italian-Americans, but the two are truly different.

3. On Snagging The Rights To “A Bronx Tale:” “‘[Palminteri] wanted to make sure that he could play the part of Sonny. If you opt to sell it to [the studious], at the end of they day they’re going to want somebody with a name to hedge their bets and they’ll probably come to me.”

After promising the role to Palminteri, he was able to direct.

2. On Casting a Non-Actor In A Lead Role: “You gotta find kids from that neighborhood. Kids that understand that world. [Francis Capra] would say to me, ‘You want me to cry yet?’ I’d say hold on, so he understood the meaning and the reason and the importance of that emotion and he was ready to do it so I was always amazingly surprised how he understood that at such a young age,” De Niro said. “These are kids, 14, 15, 16, who want to be men. In that culture they want to be grown ups. They aspire to what they see before them in the gangster culture, the Sonny culture.”

1. On The Dangers Of Method Acting: Following the interview there was a Q&A with members of the audience. His last answer of the night, which was probably De Niro’s best line since “You talkin’ to me” was in response to a question posed by a poor college student.

“I don’t know what the dangers are because I’ve never experienced that. I don’t know if you’re saying somebody gets so involved in their role that they’re going to wind up losing themselves and go crazy. I’ve never seen that ever. Ever! Ever! Ever!” De Niro said. “Whether it’s Stella Adler or whether it’s Lee Strasberg, do the technique whatever, and they overlap a lot, because at the end of the day actors use whatever works for them. When they’re in there, in the moment, you have to use what’s good for you. You think about your mother who died last week. You think about this, you can think about that. You do whatever. My two things are, you don’t hurt yourself. You don’t hurt others. Everything else is okay. Whatever your wildest imagination is that can make you arrive at that point in that scene that’s fine, but the rest of it is all bullshit.”

The crowd erupted into applause and the night was over.

The Second Time Around for First Time Fest is set for April 3 – 7 and the Tribeca Film Festival April 16 – 27.