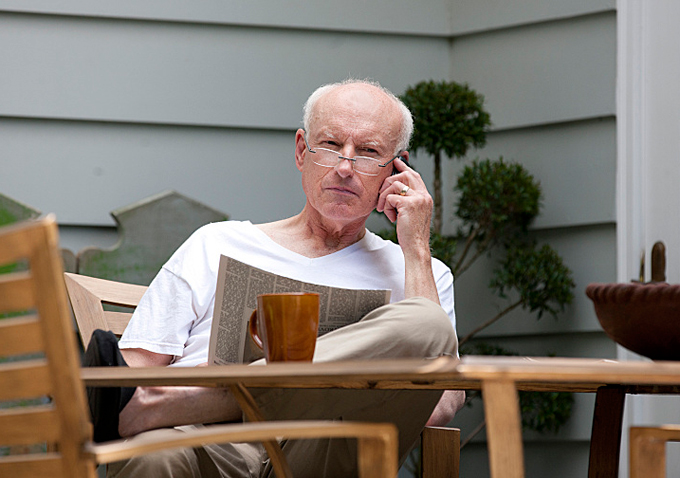 Over the last few days, most media outlets (including Indiewire) have published an obituary for the television, stage, and film actor James Rebhorn, who passed away last Friday. They praised him for his various supporting roles on such acclaimed series as “Homeland,” “Seinfeld,” and “Enlightened,” as well as in movies “Scent of a Woman” and “My Cousin Vinny,” among many others. Rebhorn was also a prolific stage performer, and in his last play, “Too Much, Too Much, Too Many,” a character writes her own obituary.

Inspired by this, Rebhorn penned an honest, direct, and touching personal obituary, which can be read in full below. He focuses on his family—supportive and loving parents, wife, and children—, his faith, and his gratitude for a long and rich acting career. It’s the kind of piece no media outlet could produce, and it leaves us with a special memory of an actor who had so often, if fleetingly, graced our screens.

James Robert Rebhorn was born on Sept. 1, 1948, in Philadelphia, PA. His mother, Ardell Frances Rebhorn, nee Hoch, loved him very much and supported all his dreams. She taught him the value of good manners and courtesy, and that hospitality is no small thing. His father, James Harry Rebhorn, was no less devoted to him. From him, Jim learned that there is no excuse for poor craftsmanship. A job well done rarely takes more or less time than a job poorly done. They gave him his faith and wisely encouraged him to stay in touch with God.

He is survived by his sister, Janice Barbara Galbraith, of Myrtle Beach, SC. She was his friend, his confidant, and, more often than either of them would like to admit, his bridge over troubled waters. He is also survived by his wife, Rebecca Fulton Linn, and his two daughters, Emma Rebecca Rebhorn and Hannah Linn Rebhorn. They anchored his life and gave him the freedom to live it. Without them, always at the center of his being, his life would have been little more than a vapor. Rebecca loved him with all his flaws, and in her the concept of ceaseless love could find no better example.

His children made him immensely proud. Their dedication to improving our species and making the world a better place gave him hope for the future. They deal with grief differently, and they should each manage it as they see fit. He hopes, however, that they will grieve his passing only as long as necessary. They have much good work to do, and they should get busy doing it. Time is flying by. His son-in-law, Ben, also survives him. Jim loved Ben, who was as a son to Jim, especially through these last months. His aunts Jean, Dorothy and Florence, numerous cousins and their families, and many devoted friends also survive Jim. He loved them all, and he knows they loved him.

Jim received his BA at Wittenberg University and his MFA at Columbia. He was a member of Lambda Chi Alpha Nu Zeta 624, a life-long Lutheran, and a longtime member of both the AMC and ACLU.

Jim was fortunate enough to earn his living doing what he loved. He was a professional actor. His unions were always there for him, and he will remain forever grateful for the benefits he gained as a result of the union struggle. Without his exceptional teachers and the representation of the best agents in the business, he wouldn’t have had much of a career. He was a lucky man in every way.

This Article is related to: News and tagged Homeland, James Rebhorn, Obituary, RIP