Review: 'Mistaken for Strangers' Is a Rock Doc About The National -- Or Is It? 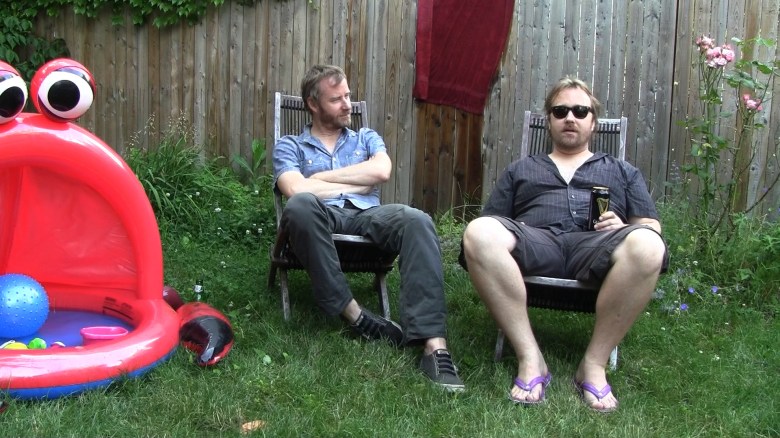 While Tom Berninger’s “Mistaken For Strangers” is technically rooted in the travels of successful indie rock band The National, it would be inaccurate to characterize it as a rock documentary. Berninger, brother of The National frontman Matt, hardly emphasizes the history of the band’s rise or its creative process. Instead, he focuses on himself—and the tensions he has shared with his sibling, nine years his senior, since childhood. The younger Berninger, a bearded, portly joker, seemingly can’t get enough of his own pathetic state. The result is a witty, meandering story about a witty, meandering black sheep that never reaches beyond the average aspirations of its goofball star.

Berninger wastes no time mocking his deadbeat lifestyle, drawing an amusing contrast between The National’s ballooning popularity and his unromantic life in Cincinnati, where his greatest accomplishments to date are a pair of cheesy direct-to-DVD horror movies. Intrigued by his brother’s rising fame, Berninger decides to accompany The National on their world tour, helping out behind the scenes while carrying a camcorder every step of the way.

It’s here that “Mistaken For Strangers” first calls into question the nature of its design: The scenario feels almost too pat, with Berninger’s camera always perfectly situated to capture his various screw-ups and offbeat interactions with the band, which culminate with virtually everyone involved growing sick of his presence. Whether or not “Mistaken For Strangers” contains any staged moments, it certainly contains a familiar arc, as Berninger launches across Europe in the band’s shadow in the hopes of gleaning something productive from their success. The eventual confrontation between the brothers is the kind of formulaic plot point one might expect from a screenwriting handbook.

Yet “Mistaken For Strangers” lands many of its laughs early on, when the tour plays against both Berninger’s and our own expectations. With no wild parties (although the director apparently drinks aplenty) or revelatory experiences available to him, Berninger only succeeds at annoying his high anxiety brother with his lackadaisical behavior — especially once Tom latches onto the band’s sole frumpy member, spacey drummer Bryan Devendorf, whom Berninger identifies as “the only one with a rock ‘n’ roll lifestyle.”

As Berninger increasingly expresses more interest in boozing around and recording behind the scenes moments than actually helping out, Matt’s temper rises, eventually stirring up the unspoken baggage that has caused Tom to resent Matt over the years. Cue the somber music and dramatic turning points: Tom turns to his parents for advice and confronts his personal shortcomings, while the movie turns into a form of therapy that viewers experience along with him.

Though its combination of witty man-child humor and sentimentalism remains watchable, “Mistaken For Strangers” ultimately struggles during its final third, when the director folds his project into the actual plot by documenting his struggle to finish the movie. Unable to determine his intentions with the project, Berninger actually shows himself at his computer struggling to edit the thing together, introducing an on-the-nose meta twist that distracts from the more substantial family issues at the root of the narrative. Yet he relishes the opportunity to break the fourth wall, ironically including critiquing the project for lacking a firm resolution in its closing act. “Do you have any kind of plan for this film?” his brother asks him at one point. In spite of the rampant comedic energy, Berninger never finds a satisfactory answer to that question.

If “Mistaken For Strangers” were a scripted comedy — which it often resembles in spite of the documentary traditions it follows — Berninger (a dead ringer for Zach Galifianakis) might arrive at an epiphany that would bring the story to a clean finish. To its credit, the movie never goes that far; its final, wordless coda implies the friction at the center of the plot far better than the overt exploration preceding it. However, Berninger generally plays it safe and keeps the proceedings slight, leaving the sense that much has been glossed over. Only the band’s continuing popularity makes his journey stand out. Like its director-star, “Mistaken For Strangers” struggles admirably but can only go so far before letting the established talent win out.

HOW WILL IT PLAY? Opening in New York this weekend as well as several VOD platforms, the film is sure to find support in ancillary markets due to the band’s popularity. It may garner solid theatrical returns for similar reasons as it gradually plays around the country.

This Article is related to: Reviews and tagged Abramorama, Documentary, Mistaken For Strangers, Music, Reviews, Starz, The National, Tom Berenger