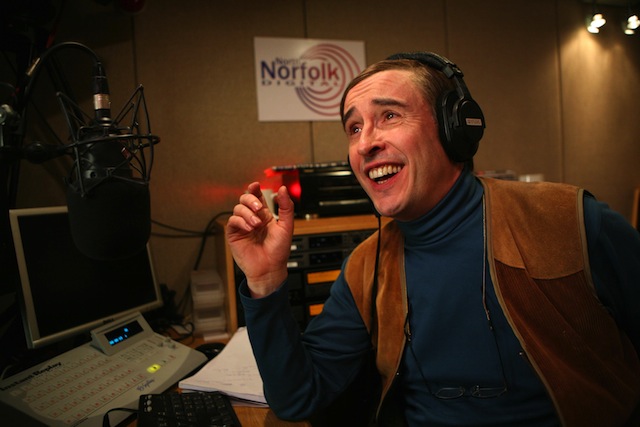 Who is Alan Partridge? Few Americans may know, but Partridge is a something of a comic icon across the pond, with multiple television programs and a “memoir” dedicated to that very question. Created as a side character on the BBC’s “On the Hour” show (1991-2), hokey sportscaster Alan Partridge—played by Steve Coogan in his best known role—transitioned to television with “The Day Today” and made the even bigger leap into headlining multiple television series, which were in fact mockumentaries following the flailing downward trajectory of Partridge’s career. From shooting a guest dead on air to the repeated mention of his obsession with “Bangkok Chick Boys,” Partridge just couldn’t catch a break, to the guffaws of (mainly British) audiences. Before there was Ron Burgundy for the Yanks, there was Alan Partridge for the Brits.

In the feature-length “Alan Partridge” (or “Alan Partridge: Alpha Papa” for those not stateside), Partridge finally gets his cinematic due. Taking almost 10 years to assemble, the film managed to get the band of writers (Oscar-nominated Coogan, “Veep”‘s Armando Iannucci, and “Borat”‘s Peter Baynham along with the more recent additions, Neil and Rob Gibbons) back together and placed director Declan Lowney (“Father Ted,” “Little Britain,” “Alan Partridge on Open Books with Martin Bryce”) at the helm. Consistent with the Partridge oeuvre, the script is littered with brilliant sight gags and referential tongue-in-cheeks (e.g. “The West Wing” gets a nod during a walk-and-talk tracking shot through the station’s hallways). But what differentiates it from the rest of the Partridge CV, beyond a larger screen and no laugh track, is the toned-down, almost subtle, treatment of Alan, emphasized even more so by his outlandish circumstances. Rather than relying on a mockumentary format or overemphasizing certain genre styles, Lowney and his team were confident enough to let the material and Steve Coogan’s performance speak for themselves. Coogan turns the caricature of Partridge into a sympathetic human being by way of a siege.

In the riverside city of Norwich, England, the tides are turning on the 55-year-old radio DJ. Whether you’re Partridge fan, foe or neutral bystander, you can tell just by his headshot that this is a man that radio hackery has forgot, with his helmet faux-combover, cheesy grin and maroon turtleneck. Panning to the studio, Alan looks practically obsolete seated next to a scruffy, t-shirt and flannel-clad twenty-something producer and proves himself to be once he opens his mouth, asking his listeners, “Which is the worst monger: fish, iron, rumor or war?” In true Partridge fashion, he replies to his own question: “Pretty clear, that one.” So when a media conglomerate steps in and purchases Radio Norwich with notions of rebranding, it looks like Alan could be the first (if not the second) on the chopping block.

Through some characteristic bumbling and bravado, Alan makes his way into a boardroom meeting with the purpose of saving a fellow DJ’s job but instead saves his own skin and makes sure the other bloke gets sacked in his stead, literally spelling out “JUST SACK PAT” on a paperboard. Planting the seeds for the film’s central conflict, DJ Pat (Colm Meaney) leaves the station with only 30 minutes to pack up his things and without a chance to say goodbye to his listeners. At the station’s relaunch party, Pat makes his way back into the station with a loaded shotgun. Thanks to trying to shoo off an embarrassing former conquest (“She’s a drunk racist. I’ll tolerate one but not both.”), Alan manages to miss the initial shutdown and runs to the police, who designate him as the hostage liaison (with the winking codename “Alpha Papa”).

Juggling the roles of accomplice, mediator and hostage, a bulletproof-vested Alan watches YouTube videos with Pat, attempts to rally hostage morale through long-winded rambling and is in a continual state of being scared near shitless—with a prime slapstick moment of standing at gunpoint with his pants down.

While standing outside of the station and conversing with the police as Pat’s mouthpiece, Alan spots a crowd hanging on his every word. Taking this as an opportunity to play up to an audience rather than focusing on the very serious mediation at hand, the attention gluttonous Alan joke-shoos the gaggling public off with “I’m trying to host a siege here.” Once back inside, this idea sinks in even further, with Alan puffing up at the thought of being “the face of the siege.” His mind goes wild with illusions of celebrity, telling his ever-put-upon assistant Lynn (Helen Montagu) that he’s a hair’s breadth away from landing the plum breakfast show and brainstorming names for himself like “The Morning Rooster” and “The Talking Cock.” These “grandiose” daydreams combined with a growing nostalgia over the good ole days DJing with Pat lead Alan to missing at least three occasions in which he could have taken control of the hostage situation and saved the day. It’s this certain balance of nonsense that pushes the audience to both cringe for and cringe at Alan. The feeling lasts through to the film’s inevitable final showdown between Alan and Pat, with the latter seeming the more pitiable in spite of having just taken a whole radio station hostage.

Nearly 25 years later, Coogan has yet to shake off his Alan Partridge clothing, in spite of an Oscar nomination (for his “Philomena” screenwriting) and near-countless other projects of varying quality (from Michael Winterbottom collaborations to “Hamlet 2”). With Coogan himself now in his late 40s, the performance has evolved from a young actor playing up stodgier elements into a more mature actor playing up an older man’s attempts to be hip, resulting in equally hilarious character quirks. He no longer dons the trademark blazer and tie, but throws on an ill-fitting, ill-patterned jumper. While telling an anecdote, he’ll make a politically incorrect remark about the Japanese, but clarify that it was the ‘90s and people’s opinions were different back then. Similarly with the film, it’s not a drastic change from Partridge’s television bows, but instead a seemingly natural progression onto the big screen.

Rather than taking the “Alan’s off to America” route or lining up a roster of big name guest stars (fans include Ben Stiller and Jonah Hill), “Alan Partridge” stays true to this small, very specific world of regional British radio and this class of local celebrity while also injecting the high-level drama needed to carry such a story to a much larger audience. It’s this balance that should win the film over for Alan Partridge fans and the general movie-going public alike.

HOW WILL IT PLAY? With “Alan Partridge” already out on VOD, Magnolia Pictures releases the film in theaters today. Although it was a critical and box office hit in the U.K., it has yet to gain traction beyond a small but devoted fanbase, and has garnered mixed reviews from American critics. Box office prospects are limited.