Review: Why 'Under the Skin' Is Scarlett Johansson's Craziest Performance 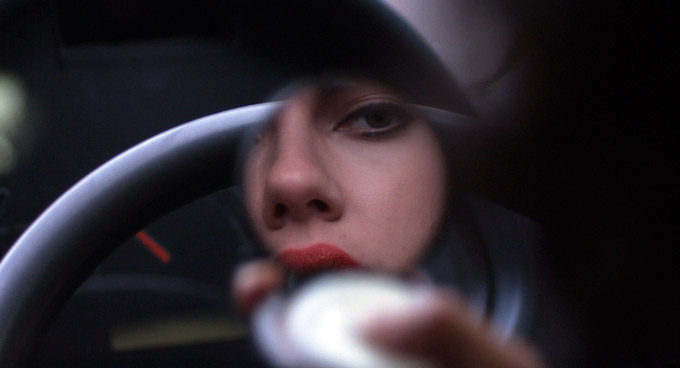 The premise is deceptively simple: Michel Faber’s 2000 science fiction novel “Under the Skin” follows an alien tasked with kidnapping earthlings and selling their bodies for consumption back home. Adapting the material into his first feature since 2004’s “Birth,” music video director Jonathan Glazer only borrows half that scenario, following the extraterrestrial seductress (a virtually unrecognizable Scarlett Johansson) as she repeatedly nabs hapless male victims while her motives remain mysterious. A totally wacky head-trip with midnight movie sensibilities and a daring avant garde spirit, Glazer’s movie meanders aplenty, but owes much to Johansson’s intense commitment to a strangely erotic, unnerving performance unlike anything she has done before.

In the grand tradition of “The Man Who Fell to Earth,” Glazer drops us right into the thick of the alien’s experiences without a modicum of exposition to explain her arrival or intent. A shocking series of visuals open the story with bright flashes of color that eventually reveal an unblinking eyeball, followed by shots of Johansson’s character against a stark wide backdrop discovering her fresh human host. In wordless minutes that follow, she drives around Scotland in search of suitors while Mica Levi’s eerie soundtrack drifts in and out, furthering a sense of discombobulation associated with her cryptic point of view.

Eventually, the creature manages to nab one man and bring him back to her lair, where he follows her into a black abyss and eventually sinks hypnotically into an invisible liquid prison. It’s here that Glazer establishes a cycle of entrapment that continues several times over, as the alien makes her way to a local dance club and nabs a suitor, then lures a shy virgin with a birth defect to the same fate. While at first effectively unsettling, the scheme grows tiresome by its third iteration, and a slightly different variation in which the alien attacks a man and his family at the beach lacks much staying power.

Yet there’s no denying the movie’s technical polish as it continually pushes its unnerving atmosphere to centerstage. Glazer supposedly shot much of the film using invisible cameras in real environments. The effect frequently pays off by creating an ongoing contrast between the believable environment and Johansson’s otherworldly presence in it. The dichotomy further develops in a later scene when Johansson’s character becomes suddenly more cognizant of her human body and undergoes some kind of unearthly emotional breakdown.

Though she retains an icy expression for much of the running time, Johansson implies a fascinating degree of calculation with the slightest robotic motions, particular in relation to occasional dialogue scenes in which she uses charm to attract her victims (the alien is a quick study). As the basic story provides a rumination on the performative nature of sexual attraction, Johansson takes the bait, throwing the full range of expressiveness and physical prowess into the role. There’s nothing remotely familiar about her appearance as she spends most of the movie hidden beneath a black mop and reigning in her typically energetic delivery. The actress has an appropriately exotic presence onscreen.

Glazer show an even more extreme commitment to the zaniness of the material than his star. The climax, a mess of crossfades and pensive shots of trees as Johansson hides out in the wilderness, brings the movie’s meditative power to a vivid finale. From “Eraserhead” to “Beyond the Black Rainbow,” there’s a longstanding tradition of such WTF-caliber storytelling littered with imagery that transcends any precise interpretation with its sheer visceral force. Invading this arena with no evidence of even the slimmest compromise, Glazer has managed to make one of the most outlandish portraits of alienation in recent memory — and Johansson, liberated from the conventions of the projects from her past, has entered an audacious new stage of her career. Let’s hope she stays there. No matter its impermeable depths, “Under the Skin”certainly will get under yours.

HOW WILL IT PLAY? A24 releases “Under the Skin” in several theaters nationwide this Friday. Curiosity surrounding the movie along with critical support should yield solid box office returns on opening weekend. Word of mouth looks to be decidedly mixed, but it could generate sufficient interest to yield a cult following ahead of summer blockbuster season.

A version of this review originally ran during the 2013 Telluride Film Festival.

This Article is related to: Reviews and tagged A24, Jonathan Glazer, Reviews, Scarlett Johansson, Under the Skin