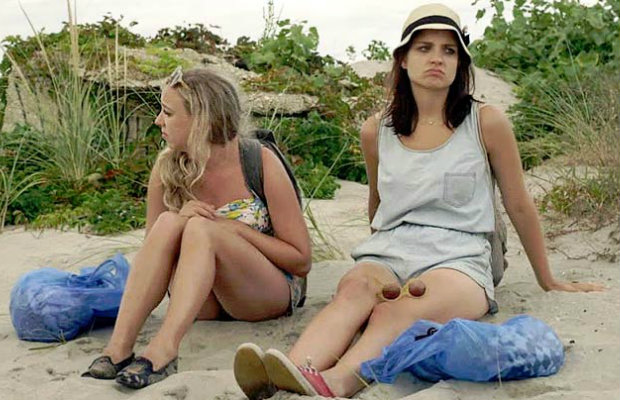 Some movies comment on a generation by virtue of the colorful personalities who epitomize it, with Richard Linklater’s “Slacker” still the paragon of the genre. Others take the simpler route of turning their characters into symbols of the times. “Fort Tilden,” directors Sarah-Violet Bill and Charles Rogers’ goofy portrait of self-involved millenials over the course of a problematic Brooklyn day, falls into the latter camp. While frequently very funny and sustained by a pair of boldly unlikable female protagonists, “Fort Tilden” adopts the glorious stupidity of its stars, and echoes their gratingly obnoxious temperaments.

Of course, the ability to tolerate the limited world views of flighty 25-year-olds Harper (Bridey Elliot) and Allie (Clare McNulty) is a dare that the movie establishes early on, when the Williamsburg roommates text snarky comments to each other during a horrible acoustic rooftop show. “I should’ve peed before this,” Harper writes, her words popping up onscreen in the first instance of a recurring device. Their cynicism comes hard and fast: After mocking the physical appearance of the twins performing onstage, they turn to ogling the guys at the show, who invite them to come along the next day for a trip to the Brooklyn beach of the title.

Before that misadventure kicks off, “Fort Tilden” elaborates on its leading ladies’ selfish existence: Hoping to get lucky, the moody Harper rearranges their apartment’s furniture (“I want the place to be sex-ready,” she asserts) and makes a phone call to her millionaire businessman father, who offers to send her more money; Allie anticipates an upcoming trip to Libera to join the Peace Corps while dodging texts from her superior; she nabs a bike from the next door neighbor by taking advantage of his evident crush on her, rolling her eyes the whole time. The script never hesitates to remind us that we’re watching monsters of privilege preying on everything around them.

And then they’re off, wandering deeper and deeper into the bowels of Brooklyn, whining and sniping at everyone in their reach. With its one-note progression, Bill and Rogers’ straightforward narrative is oddly conventional in spite of the ongoing attempts to make Harper and Allie into utterly contemptible beings. At its best, the movie works like an indie riff on “Romy and Michele’s High School Reunion,” turning the plight of its clueless leads into an amusing romp in tune with their perspective. But “Fort Tilden” struggles to express their neuroses with much ingenuity.

As they evade angry stroller-pushers, argue with a cab driver and worry about potentially creepy pedestrians, the dialogue is littered with reminders of their symbolic value (at one point, Harper recalls a perverted encounter “when I was canvassing for Obama”; when Allie complains about a photo posted online, Allie asserts, “you don’t own the internet”; after annoying some pedestrians, one asserts, “the millennial generation is fucked”). The reference points are obvious to the the point of distraction (oh, look, Allie’s reading “Infinite Jest,” how *precious*), and the surrounding broad stereotypes they encounter (including Latino corner store workers and an Indian cab driver) suffer from the same ugly simplifications that Allie and Harper tend to make. Sometimes the movie portrays their dumbness with a clever sense of remove, but mostly it just operates on their wavelength.

Yet the filmmakers display such reckless confidence in their comedy that “Fort Tilden” can’t help but nail its punchlines from time to time. Elliot, in an effectively snotty performance, plays off McNulty’s pouty-eyed gaze with constantly bubbly results. The comedic high point arrives when the duo encounter a group of catty gay men — they deserve their own spin-off — who trade barbs with the women in the midst of a drug deal. The beach-set finale, in which one character makes an awkward pass at another while the drugs slowly kick in, effectively brings the various misconceived ingredients into a fully realized calibration of awkward humor.

After such a messy trajectory, it’s a small comfort to find that “Fort Tilden” arrives at one especially shrewd image: Allie, topless on the beach, holding up her cell phone and getting an earful from her Peace Corps contact. The movie plays fast and loose with its ironic outlook, but in that fleeting image, it finally offers a lucid statement about the disconnect between the recklessness of youth and burgeoning adulthood.

“Sometimes, you have to live a little to know who you are,” one of the women says, but in “Fort Tilden” they can’t seem to get that process started. By its end, they’re perpetually trapped in a cartoonish loop of sophomoric indecisiveness. It’s a blunt observation, made with far subtler touches in recent portraits of young New Yorkers ranging from “Tiny Furniture” to “Appropriate Behavior,” but no precedent in this topical subgenre goes as much out of its way to make its subjects so incredibly contemptible.

And that could very well explain why it won the grand jury prize at the SXSW Film Festival, which attracts a large crowd from the same demographic as Allie and Harper: The movie works so hard to make a statement about modern personalities that it bludgeons viewers into accepting it. Watching “Fort Tilden,” one can feel trapped in the redundant cycle of their lives even while laughing at its crass extremes. In its closing scene, Allie refers to a cutesy indie rock melody as “tediously adorable,” but by then there’s no doubt who she’s really talking about.

HOW WILL IT PLAY? With the SXSW grand jury prize undoubtedly luring some distribution interest, “Fort Tilden” is likely to receive a solid theatrical release, although its lack of stars and mixed word of mouth will limit its mainstream commercial potential.