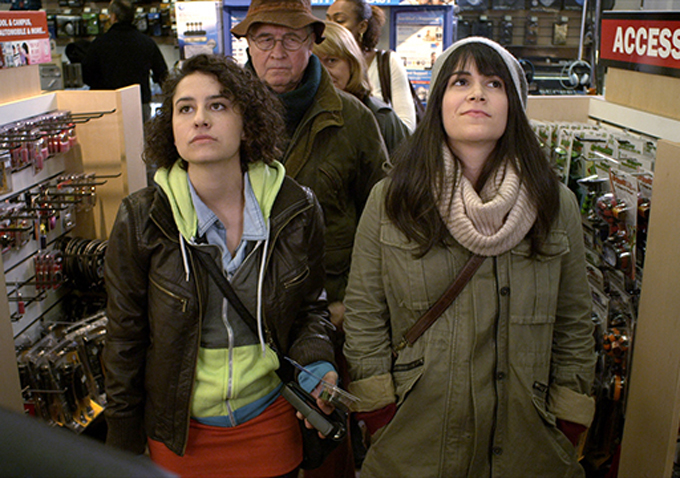 The season finale of “Broad City” kept it simple: Abbi and Ilana go out to a fancy restaurant in their “fattest“
outfits. In “Last Supper,” the two friends decide to treat each other
to a luxurious seafood dinner after Abbi makes some money selling one of
her cartoons to the world’s worst dating website. What follows includes
amusing interactions with the fancy waiter, worsening allergic
reactions, surprise condoms and a stressed-out chef played by Amy
Poehler, who also directed the episode.

READ MORE: Why ‘Broad City’ is the Anti-‘Girls’

“Last
Supper” is very different from the pilot, whose segments function
almost like loosely connected webisodes. It works. The pilot showed how
seamlessly “web humor” can translate to a bigger screen on a higher
budget. It was as smart a beginning — AV Club’s Caroline
Framke wrote the show was “remarkably self-possessed, even in its first
episode” — as the “Last Supper,” a touching ending.

The
first season of “Broad City” shows creators Abbi Jacobson and Ilana
Glazer, along with a talented team of writers and directors, not so much
growing as expressing comedic range. The season had musical numbers and
brilliant montages, a diverse cast of supporting characters, consistent
themes about the indignities of entry level work and rising inequality
in New York City, along with innovative style and
coinages (“pussy weed”). Ilana and Abbi, heightened versions of
creators Glazer and Jacobson, are a refreshing odd couple. Ratings are
solid. “Broad City” is retaining most
of its “Workaholics” lead-in, and Comedy Central has given it a second
season. Most comedies improve in season two, so fans are excited.
Critics have warmed to the pair’s casual and confident style, including
Alison Willmore in her last column for Indiewire, weekly recappers at The AV Club and Margaret Lyons in New York.

The success of the show proves something I’ve been arguing for awhile: that web series, or independent television, are valuable because creators can hone their voice and audience outside corporate development.
What’s more, “Broad City” proves that just because a series is not
massively popular online doesn’t mean it cannot succeed on television —
its most popular episode,”I Heart New York,” posted in 2011, has amassed 170,000 views over three years.

Indie
TV is more diverse than traditional TV, where many networks have few or
no shows by and about women and people of color. Networks like Comedy
Central and HBO should be commended for green-lighting shows by
promising young women, but we’re a long way from parity.

In
that spirit, here are some stand-out comedies about women living in the
city, created by and starring women who should be on the radar of
development executives for broadcast, cable and web television. Like the
web series for “Broad City,” no show is perfect, but each shows clear
perspective and promise. And there are plenty of great series I may have
missed or forgotten, so sound off in the comments! [Go to page 2 to watch the webisodes.]

Executives
might hesitate airing a show about an underemployed actress, but Ann
Carr’s series is very open to adaptation. It’s about more than the
plight of the creative worker. Each episode of “The Actress” pits our
heroine, played by Carr, against some jerk who belittles or insults her,
often with heavy doses of misogyny. She struggles to keep her cool,
failing from time to time. In the third season, airing now exclusively
on Amy Rubin’s (“Little Horribles”) Barnacle Studios network, a
dermatologist hawks BOTOX, squeezing her face to simulate wrinkles. A
successful actress and rival flippantly reveals a (false) rumor that our
actress took a break in college to have a baby. The series, whose fans funded season
3, has a sleek new look and hired two directors from the web version of
“Broad City”: Tim Bierbaum, who directed its first season finale, and
TJ Misny, who directed its second.

Premiering
soon, “Be Here Nowish” is a comedy from Natalia Leite and Alexanda Roxo
about two New Yorkers who decamp to Los Angeles in search of spiritual
awakenings. Comparisons to “Girls” are inevitable, but I expect “Be Here
Nowish” to have more fun.

Like
“Broad City,” “Chloe and Zoë” features two young women trying to figure
out their passion without much money or self-awareness. Created by
Chloe Searcy and Zoë Worth, the series has aired two full seasons,
following the protagonists as they set out to shoot their first film.
Last month Searcy and Worth released that film-within-the-series, “Killer GPS,”
a horror short about a Valley girl with dreams of making it in
Hollywood. It’s funny and features a twist at the end, of course! If
you’re hungry for more Zoë Worth, she and her non-profit team of
collaborators, The Collectin, are currently raising funds for their first feature, “Running Wild,” over on Indiegogo.

Currently
shooting its second season, “F to 7th” is a “homoneurotic web series”
about Park Slope residents exploring the complications of gender and sex.
The series is notable for witty, awkward scenes featuring comedic
actors alongside creator and star Ingrid Jungermann, who started making
web series as an MFA student at NYU with former partner Desiree Akhavan
(“Appropriate Behavior”) in their series “The Slope.” Amy Sedaris, Gaby
Hoffman, Michael Showalter and Ann Carr all made appearances in season
one.

Debuting on Issa Rae’s YouTube channel on April 2,
“First” is a “Love Jones”-inspired series about two childhood friends
falling in love. Created by Jahmela Biggs, “First” helps cement Rae’s
channel as a hub for entertaining series from Hollywood’s next
generation of black writers.

New
Zealand is becoming a source for great TV programming, most noted for
“Top of the Lake,” but the government is investing web series as well,
most recently announcing a fund for Maori shows. “Flat3”
follows three “painfully single” roommates as they stumble through the
trials of work and love, mostly love. The show is bright, accessible and
consistently entertaining, featuring amusing performances and assured
editing. With help from NZ On Air, the country’s independent broadcast
funding entity, Flat3 is currently working on its third season.

The
newest show from One More Lesbian and tello films, the
subscription-based network for lesbian film and television, follows two
friends living in Chicago’s “Girls Town” (Andersonville) who rely too
heavily on social media for dating. Written by and starring Caitlin
Bergh and Laura Zak, the series is a great showcase of their different
comedic styles. Bergh’s character is bubbly, warm and a little oblivious
where Zak’s is sardonic and skeptical. They’re a pleasure to watch.

Since
“Living Single” and “Girlfriends” we haven’t had too many buddy
comedies starring black women, so Ashley Blaine Featherson and Lena
Waithe’s (“Dear White People”) “Hello Cupid” fills a major void. Written
by Waithe and starring Featherson and Hayley Marie Norman, “Hello
Cupid” is fun and easy to watch because its leads have great chemistry
and charisma. It is currently airing its second season on Black &
Sexy TV’s pay-per-view channel on VHX.

Does
Comedy Central already have its “Broad City” follow up under its wing?
Fans of “Workaholics” will recognize comedian Jillian Bell as one of the
show’s funniest supporting players. You can now see her in
“Idiotsitter,” a comedy she created with co-star Chartlotte Newhouse
about a rich girl under house arrest and the friend who has to look
after her. Bell is brilliant at being bad, something she doesn’t get to
do often enough in primetime.

There’s
never been a better time to be a Kardashian, unless you’re their butcher,
browner sister, Kam. Shot in Chicago by Ryan Logan, who co-created the
show with star Fawzia Mirza, “Kam Kardashian” is a witty send-up to
celebrity culture and the mainstreaming of gay culture, with standout
supporting performances from Beth Stelling and Joel Kim Booster. In the
second season, currently airing, GLAWD (a satire of GLAAD) is trying to
makeover Kam’s image with the help of their intern, played by Booster:
“They’re going to take you from this broke-down, dumpster Anne Heche
caterpillar and make you a beautiful Portia de Rossi butterfly!”

It won’t change your life, but “Kelsey” is a bright sitcom about a single woman looking for the right woman in New York after a breakup.
The series just wrapped its first season earlier this year. Come for
star Nichole Yannetty, stay for the cheery, diverse cast and relaxed
style.

Amy
Rubin’s series about a “self-indulgent lesbian” is a delicious cocktail
of awkwardness. Like “The Actress,” the show pits the protagonist
against an antagonist, and often Amy, played by Rubin, is her own enemy.
Amy wants to control her surroundings and self-presentation but
indulges her vices and reactions to others. Watching Amy fail is the joy
of “Little Horribles,” but Rubin smartly cast a slew of stellar
supporting stars, many with their own web series, including Ilana
Glazer, Ann Carr, Cynthia Stevenson, Sue Galloway, Nicole Byer, Sasheer
Zamata, among others. [Watch all of “Little Horribles” below:]

Now that Sasheer Zamata is a cast member on “Saturday Night Live,” I’m not holding my breath for more “Pursuit of Sexiness,” the UCB web
series she co-stars with the equally hilarious Nicole Byer. Still, the
show about two friends trying to get well-laid in the Big Apple is at
least proof Zamata and Byer could carry lead roles on television.
On its own, season one is delightful and inventive, but we want more!

New
Orleans improv comedians Kyle June Williams and CJ Hunt created this
gem of series, a “Portlandia”-style sketch show set in the Big Easy.
“Sunken City” shies away from “Portlandia’s” curious randomness choosing
to focus on a set group of characters and how they try and fail to make
it in the city.

A standout at the last New York Television Festival, Becky
Yamamoto’s comedy just finished a strong first season. The show focuses
on Sarah, a recently unemployed thirtysomething unsure of where her
life is headed, and tackles common struggles — overqualification at
work, under-enthusiasm about marriage — with equal parts brutality
and tenderness. Yamamoto shows, through humor, how uncertainty about who
you are makes it difficult to relate to other people. Sarah’s lack of
direction, her shattered self-confidence, is the heart of the show’s
humor.