The 'Nymphomaniac' Cheat Sheet: Everything You Need To Know About Lars von Trier’s Epic Study of Sexual Obsession 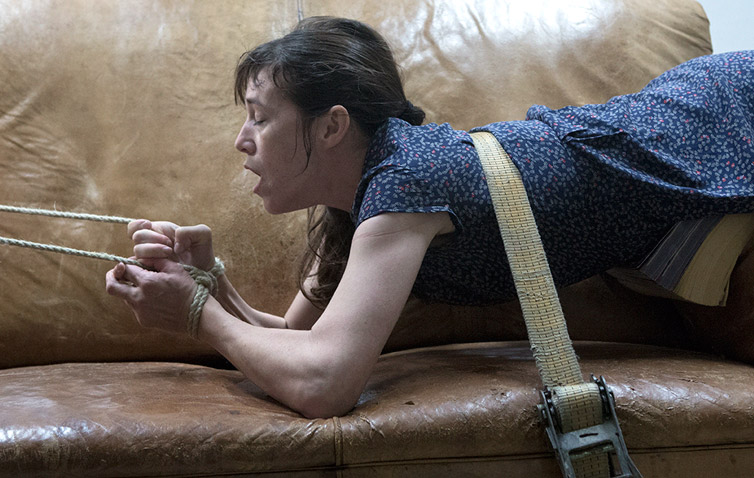 As anyone who’s seen Lars von Trier’s “Nymphomaniac” can tell you, there’s a helluva lot to potentially discuss. With the second Volume opening theatrically in the U.S. this Friday (it’s already available on VOD), let’s dig a little deeper, get a little bit more esoteric and eccentric and talk about some of the influences that von Trier has drawn on in his latest opus.

This article contains spoilers. But since a virgin experience of “Nymphomaniac” is practically impossible for anyone who’s seen the posters, trailers or teaser scenes (or indeed any other work previously produced or directed by von Trier) — AND since this is something of his magnum opus — we urge you to read on. Our earlier, more classically formatted review is here. 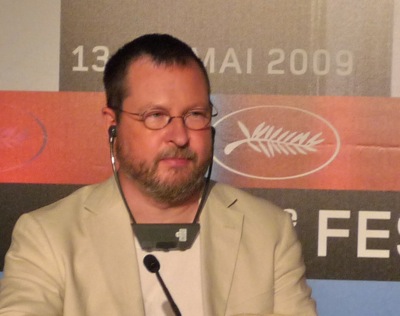 Although he’s 57 years old, the term enfant terrible couldn’t be more fitting for Danish auteur and provocateur Lars von Trier, who seems to find something akin to child-like glee in doing exactly what he wants, come hell or high water.

“Nymphomaniac” is his latest and most singular work, a two-part film that combines explicit sexual content and intellectual digressions in the story of the titular protagonist, whose real name is Joe. She’s obsessed with sex and gets very scared indeed when love might get in the way of enjoying the purely physical pleasures of intercourse and all its various permutations.

Von Trier was inspired to make “Nymphomaniac” after reading Marcel Proust’s monumental “In Search of Lost Time,” not coincidentally a work in seven volumes, exactly one less than the eight chapters in which von Trier has divided his work – just to make sure it’s clear that he’s trying to outdo Proust here.

Questions of sex and sexuality run through both works but are not the main focus of either. Both are also unusually lengthy for their form, with von Trier’s version coming in at a reported 330 minutes, though the version released first, in two parts, comes in at a total of 240 minutes (or exactly four hours).

It’s not exactly a spoiler to note that the main male part in “Nymphomaniac,” the person who poses the threat of falling in love with Joe or being loved by her goes by the very French name of Jerôme — and that the child Joe and Jerôme will have together, the proof of their love, is called Marcel, also the first name of a certain French novelist.

That said, the work that first came to mind for this critic after having seen the four-hour “Nymphomaniac” is not Proust but a much earlier example of French literature: “Essais” by Renaissance writer Michel de Montagne. Stretching across three books and 107 chapters, “Essais” is also not for the faint of heart; Montagne is as fond of digressions as Proust and von Trier in “Nymphomaniac.”

What the work of de Montagne, Proust and now von Trier have in common is that they reject what they see as an artificial division between the sciences and the objective truth on the one hand and emotion and perception on the other. Every experience, object and thing is filtered through the personality of each person experiencing it and is thus unique and different even for two people essentially experiencing the same thing. I don’t think it was necessarily von Trier’s idea to make a feature that could function as an apologia for film criticism (or art criticism in general) but in a way he has. The beauty of film criticism is, of course, that opinions may (and should) vary; indeed, Variety’s Peter Debruge seems to suggest the film’s actually against film critics. 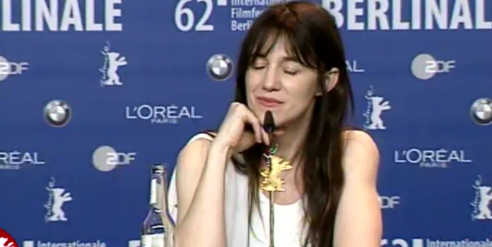 Joe, the nymphomaniac of the title, is not so much played as incarnated by the director’s latest muse, Charlotte Gainsbourg, also the lead of “Antichrist” and one of the two female leads, besides Kirstin Dunst, of “Melancholia.” Always a fearless performer, the 42-year-old daughter of the late French singer and provocateur Serge Gainsbourg and British actress and singer Jane Birkin seems like a perfect fit for von Trier, who’s at least as boundary-pushing as Gainsbourg’s father (the breathy hit song “Je t’aime moi non plus” is probably Gainsbourg and Birkin’s most famous collaboration stateside).

For much of the first of the two films, however, which chronicle Joe’s early life, she’s played by a series of child actresses (Ronja Rissmann, Maja Arsovic and Ananya Berg play Joe at ages two, seven and 10 respectively) and, from about 15 years until she gets a baby, she’s played by newcomer Stacy Martin, a strikingly featured newcomer who happens to be of mixed British-French parentage, just like Gainsbourg.

Indeed, although there are references to pounds (as in British money), the film is set in a weird sort of no man’s land, geographically speaking, where people speak English with a wide variety of accents – just imagine how different Uma Thurman, Udo Kier and Jamie Bell all sound in English and know that LaBeouf attempts a British accent in some takes – and where there are no clear geographical landmarks that could help anchor the action in a recognizable reality (it was shot mainly in Belgium and Germany, as the large sockets in the homes clear show, and people talk about “high school,” an institution unknown by that name in Britain).

This is of no matter, however, as von Trier’s not working in any documentary reality but rather the realm of feelings and experience; the true landscape of the film is Joe’s struggle, her gradual maturation and her accumulated wisdom as she deals with whatever life happens to throw at her. She either lets herself be shaped, or is forcibly if unconsciously shaped, by her experiences. 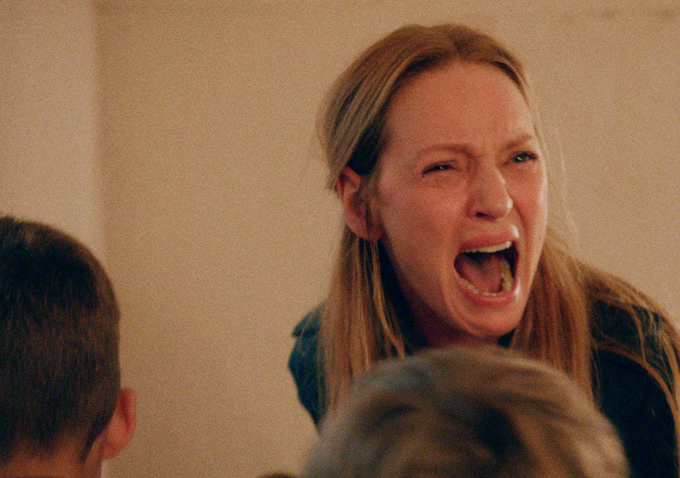 With a title like “Nymphomaniac” and a boundary-pushing director like von Trier, of course there’s plenty of nudity and sex, even if the current four-hour version is an “abridged and censored” version, as per the opening title card, that was done with the director’s “permission but without his involvement otherwise.”

Von Trier touches on Joe’s rather innocent, almost proto-sexual experiences as a young girl and there’s an early, breathtaking scene in a tiled bathroom in which a seven-year-old Joe and her best girlfriend, simply called “B” (Sofie Kasten as a girl, then Sophie Kennedy Clark as a teen), conduct something akin to a fantasy water ballet. The scene is vintage von Trier in that it’s placed at a point in the narrative where the true (read: erotic) reading of what’s happening is clear even if the scene in and of itself is entirely innocent and the girls have no idea what they’re doing or why they like doing it so much.

But neither Joe nor B remain that innocent. Around the age of 15, Joe has a very lackluster first attempt at intercourse with a biker kid, Jerôme (Shia LaBeouf), who’s practically forced by the Lolita-ish Joe — wearing a plaid skirt, a cardigan and ruby (!) slippers — to have sex with her. He indulges the request for a grand total of eight thrusts — or “3+5,” as von Trier helpfully shows onscreen (he flips her over after a couple of thrusts, hence the two different numbers). The number is significant for a few reasons: It not only represents the total chapters in the film (five in the first installment, three in the second) but also points to the value of eight in the Kabbalistic tradition, where seven is perfection and eight represents the number “higher than nature,” the one beyond perfection. 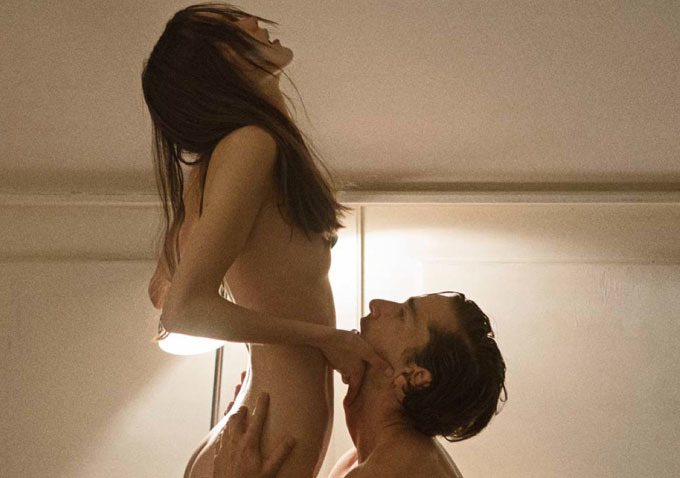 Though her first experience “hurt like hell” and she promises to never do it again, Joe’s quickly introduced into a life of sexual adventure by B, with whom she goes looking for sex on a train in a childish game in which the one with the most conquests will win a bag of candy, leading to Joe having to seduce a first-class passenger (Clayton Nemrow) in order to win.

Not much later, Joe, following B, becomes involved in a club of young women who rebel against love by having sex with as many people as possible — though only once with each person. Their initiation rite includes the chant “Mea maxima vulva,” a typical von Trier touch that manages to be both funny and (for Catholics, at least) potentially offensive, modeled as it is on the confession of sin. 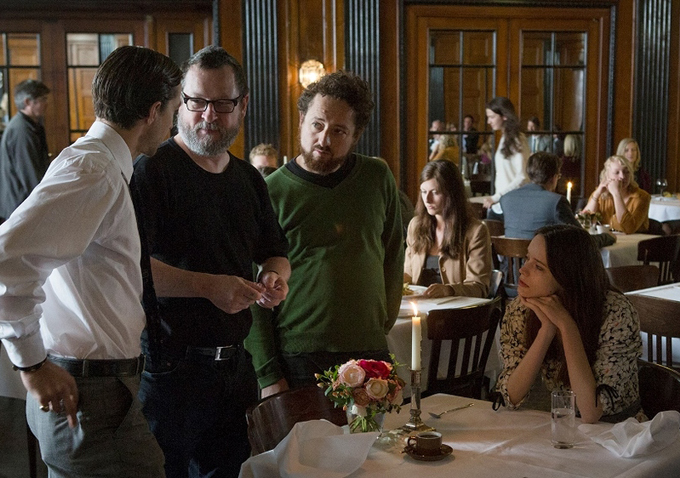 The film, like all of von Trier’s previous efforts, is produced by the company Zentropa, which von Trier co-owns and which has produced a large part of the output of internationally successful Danish films since von Trier and his cohorts (including Thomas Vinterberg and Susanne Bier) founded the Dogme 95 movement, complete with its game-changing manifesto.

Like the Dogme movement, Puzzy Power had a manifesto, in this case redacted by a group of women, which was a “statement on women and sexuality,” and stated rules that include such simple things as a “believable script,” “respect for female desire,” “absence of violence,” “no facial ejaculations” and the presence of humor.

The Puzzy Power manifesto could be almost entirely be applied “Nymphomaniac” as well: The film is very much about a woman’s experience of sex and sexuality (though when Joe later ventures in S&M practices, the “no violence” part becomes somewhat problematic, though it is, in a way, consensual violence and therefore more difficult to classify).

“Constance,” which was a 1998 film that played a role in the legalization of pornography in Norway in 2006, used a flashback device and that’s also the case in “Nymphomaniac.” Without it, the film would lose a lot of its meaning. The life of Joe and the way she sees her past actions are recounted by Joe herself to Seligman (Swedish actor Stellan Skarsgard, on his sixth film with von Trier), a Jewish intellectual who’s an asexual virgin and who listens to Joe’s story after he’s literally picked her up off the pavement where she ended up after being beaten to a pulp.

The dialogue that starts between the asexual intellectual man and the corporally uninhibited woman are what makes “Nymphomaniac” such an interesting film, with Seligman/von Trier drawing countless parallels between sexual acts and modes of behavior to other things in the world — including, in the first chapter of the film, fly fishing.

There’s a definite sense, in this cut at least, that von Trier has little interest in making a straightforward porn film – Joe’s behavior and constant stories (all seen in graphic flashbacks) are only there to provide fodder for Seligman’s intellectual mind games, many of which are amusing and a lot of which seem only tangentially related, except when one considers the mind of the characters — exactly like in Proust. Indeed, the filmmaker, whose work has often featured sexuality, can be compared in a sense to directors like Ingmar Bergman from next-door Sweden. In Bergman’s films, sex may as well be a form of torment or cruelty.

However, that doesn’t mean the film’s not full of humor and typically von Trierian easter eggs — such as a scene that’s an almost direct quote out of his own “Antichrist” (and no, it’s not sexual at all…which is part of the joke, obviously).