Cannes Review: Michel Hazanavicius' 'The Search,' Starring Berenice Bejo, Is a Remake Devoid of a Purpose 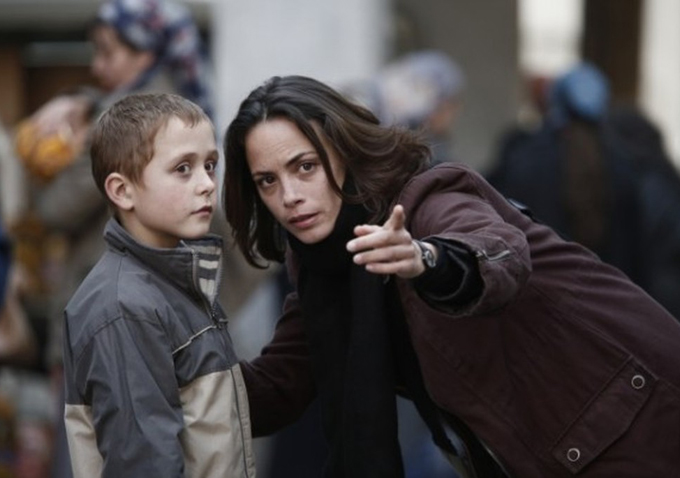 Why bother updating a good movie? Michel Hazanavicius’ “The Search” implicitly asks this question and never finds a sufficient answer. Fred Zinneman’s 1948 drama revolved around the plight of a child concentration camp survivor separated from his mother in postwar Berlin and aided by a benevolent American private memorably portrayed by Montgomery Clift. In his 2014 remake, “The Artist” director Hazanvicius upgrades the story to Second Chechen War in 1999, swapping the Clift role for a Human Rights Committee representative played by Hazanvicius muse Berenice Bejo. Instead of a mother searching for her son, young Chechen refugee Hadji (Abduel Khalim Mamutsiev) winds up being cared for by Carole (Bejo) while his older sister Raissa (Zukhra Duishvili) follows his trail after Russian soldiers murder their parents.

Hazanvicius, who also wrote the screenplay, compounds these ingredients with a separate narrative involving the experiences of a young Russian named Kolia (Maksim Emelyanov) enlisted into the conflict who gradually evolves into a warmonger. Aside from this intriguing addition—which awkwardly fits into the bigger story in its closing scenes—many of the original elements remain intact. But “The Search” lacks the the credible emotions of the original and never assembles a convincing reason for its existence.

Instead, Hazanvicius’ first conventional dramatic effort is a dispiritingly bland attempt at wartime perseverance. Its opening camcorder footage, shot by a Russian soldier gleefully documenting the murder of Hadji’s parents while he hides away indoors, establishes an awkward tone from the outset — especially because the director abandons these characters within a matter of minutes, shifting instead to Hadji’s experiences on the road, which eventually lead him to a relief camp run by the hardworking American woman Helen (Annette Bening). Fleeing the facility out of confusion, he hits the streets, where Carole finds him. As with the original, the boy spends much of the movie without speaking a line of dialogue, instead fearfully gazing at his newfound caretaker as she struggles to get the rest of the world to notice the atrocities responsible for his situation.

Unlike the Zinneman movie, in which the conflict has already passed, Hazanvicius attempts to use the scenario to explore the impact of personal experiences on activist desire. Bejo’s considerable talent is squandered by treacly dialogue, especially when she speaks in English, about her frustrations over gaining the attention of the United Nations. Opposite Bening, the actors struggle through Hazanvicius’ banal stabs at sentimentalism that never earn the gravitas he strives to achieve.

But inevitably the director’s two-and-a-half hour effort manages a few affecting moments, simply by trying everything it can: After Carole spends much of the movie yelling at European Union officials over the phone, she finally makes a trip to present to them in person, and the ambivalent reaction she finds among them successfully conveys the challenge at hand. Too bad it takes a lot of corny dialogue to get there. “You have to do something,” a Chechen urges Carole. “You have to make a difference.” You don’t say.

But Carole’s mission is a red herring that distracts from a far more compelling movie hidden in the sidelines. Guillaume Schiffman’s grey-tined cinematography ably conveys the destructive world surrounding these characters, a dusty realm littered with dead bodies among the wreckage. Young Hadji’s traumatized state, and the self-determination he discovers over the course of the movie, remains in tune with a similar burgeoning sense of courage that made the child figure in the original movie stand out. However, the material’s primary strength has nothing to do with the earlier version. Instead, it’s the tragic experience of the downtrodden soldier Kolia that holds consistent intrigue, tracking his progress from rebellious youth to cold-blooded killer. His arc is strong enough to carry an entire movie, which makes it puzzling that Hazanvicius would even bother to resurrect elements from the Zinneman film in the first place.

As it stands, “The Search” has the feel of a self-serious effort from a filmmaker recently given carte blanche in the wake of global success. “The Artist” triumph, which started with acclaim at the Cannes Film Festival and ended on Oscar night in 2011, may have given Hazanvicius—previously only known as a director of comedic material—the boost of confidence to try something different. It’s unfortunate that he would abandon an arena where he deserved the attention, considering the innovative approach of “The Artist” to explore the appeal of silent cinema, for a humorless effort devoid of fresh ideas. Of course, “The Artist” contained plenty of ingredients found in the great silents preceding it, but the similarities end there. Instead of using the original to say something new, the only relationship that between “The Search” and its inspiration is an unflattering point of comparison.

“The Search” premiered this week at the Cannes Film Festival. It does not currently have U.S. distribution.