If You Think 'Saturday Night Live' Sucks, You May Suffer From Selective Memory 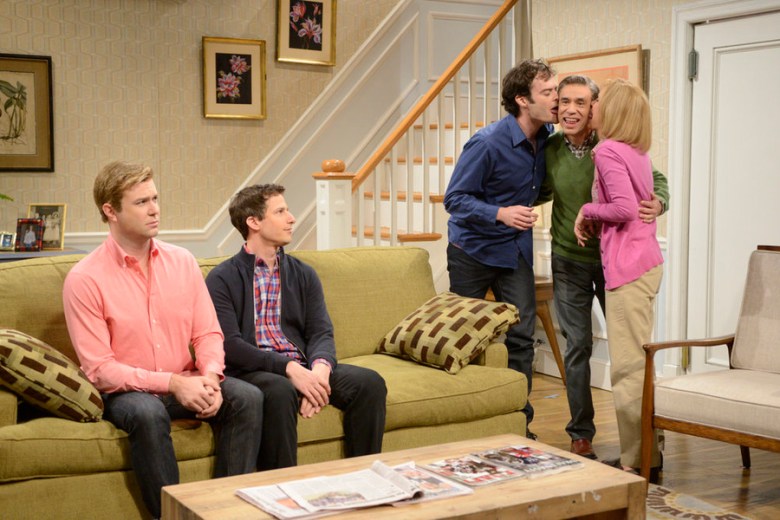 With Andy Samberg at the helm, “Saturday Night Live” broadcast its season finale last weekend. In proud “SNL” tradition, the finale brought back a number of familiar faces to fill out the cast, and the Internet-capable viewing audience, in proud Internet tradition, immediately began the Monday morning quarterbacking of the season and odds-making on which performers will return next year. (Things look good for Sasheer Zamata! Not so much for Brooks Wheelan.)

These critiques are always haunted by a writer’s memory of both the great sketches of the year and the not so great — and what’s interesting is that there’s rarely a critical consensus. (There are apparently people in the world who think nearly five minutes of a man pretending to be a baby is a funny idea. Congratulations to them.)

The fact is that sketch comedy is a hard format to make work in a longform format, especially when you consider that unlike sketch-driven shows like “Mr. Show” and “Key and Peele,” “SNL” is not helmed by a small core group of talent, but instead, written and performed by an eclectic group of comedians. It’s a system deliberately developed by creator Lorne Michaels over 39 years, but it sometimes means that talented performers get overlooked. After all, some of the following cast members only lasted one season: Ben Stiller, Damon Wayans, Janeane Garofalo, Larry David, Robert Downey Jr., Sarah Silverman, Jenny Slate and countless others who have gone on to do great things.

You might have forgotten entirely that some of those people were ever on the show — which speaks to a core element of the “SNL” experience — that of selective memory, something that happens when anything runs for almost four decades.

A common meme for TV enthusiasts, when it comes to “Saturday Night Live,” is that the show’s best complete cast is the cast that was on the show when they were in their early teens — just old enough to stay up late to watch the show, if they were allowed. It’s a generational problem that leads to parents and kids just not being able to agree on the talents of John Belushi versus Will Ferrell.

Of course, the “kids today” have no excuse for their ignorance of past casts — not only is a large majority of classic “SNL” available online, but reruns have been happening for decades. Beginning in the early 90s, Comedy Central constantly aired edited versions of classic episodes as part of their programming (VH1 now reruns old episodes) and for many kids of that era, it was their first exposure to the brilliance of the Blues Brothers or Roseanne Roseannadanna or “Jane, you ignorant slut.”

For those reruns, though, the original episodes were cut down from 90 minutes to 60 minutes — meaning a full half hour of material was lost. That sometimes means losing a musical performance, or a few of the extra commercial breaks the live show used to cover costume changes. But it also allowed the show to remove technical failures, dud sketches and moments of bad taste from the public memory. (Though “Miss Pregnant Teenage America Pageant,” judged by Dudley Moore as Roman Polanski, sounds like a trainwreck worth checking out.)

If you go looking for past “SNL” stinkers, they’re not hard to track down. But like your memories of a past relationship, it’s a lot easier to remember the good stuff. Those who say things like “worst Weekend Update anchors yet” have had their perceptions skewed by the fact that their exposure to the truly bad stuff of years past is limited.

Seriously, you’re really not allowed to shoot down this season’s Weekend Update anchor Colin Jost (who, so far, has only had three months on the job) until after you sit through a full segment featuring 1998’s Colin Quinn (who managed to stay on the desk until 2000!). And most especially, those decrying this as “‘SNL”s worst season ever” need to bone up on their history — specifically, the Jean Doumanian years, which are so bad that no one really wants to talk about them.

Though talk they might. Our current awareness of “SNL” as a show and as a creative process is bigger than ever. That’s not just because of  Tom Shales and James Andrew Miller’s oral history “Live From New York: An Uncensored History of Saturday Night Live,” a mammoth but fascinating look at what really happened behind the scenes. The basic fact of the Internet not only means we can find out who wrote which sketches, and watch the ones which didn’t make the air, but we can actually see the behind-the-scenes in near real time. The show might still have a mystique to it — but that mystique changes when its stars are posting videos about their first year on the show, as Brooks Whelan did for 2013.

Today’s new “SNL” fans may not have the appreciation they should for performers like Gilda Radner and Dan Aykroyd, but that’s because “Saturday Night Live” was never meant to be a document to withstand the test of time. It’s fast, it’s loose, it’s topical. Which is why it’s live.