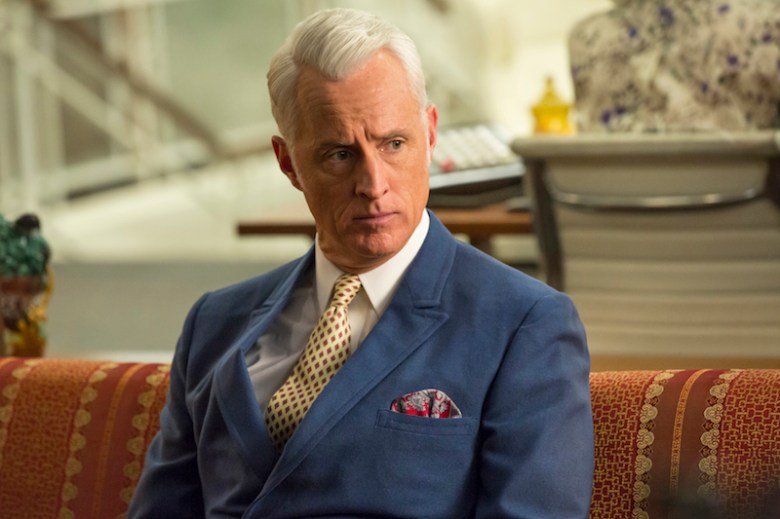 Having to wait another year to see the final seven episodes of “Mad Men” is a journey no one is eager to embark upon, but Matthew Weiner — who directed and co-wrote last night’s mid-season finale with Carly Wray — gave us plenty to chew on in an immensely satisfying and oddly optimistic stopping point with the men in a panic and the women in calm control.

The men were in a panic, that is, other than Roger. The former figurehead took his father-figure’s opinion of him to heart, rebelling against his label as a talented and skilled man, but “not a leader” by making himself the new president of the company. “Mad Men” pulled out a few of its classic finale tricks — Ted flip-flopped from one surprise to another (glad you’re sticking around Teddy! stay out of the air!), a marriage ended, and business buy-outs became the top plot point. But the lasting impressions won’t be Cutler’s greed (“What? It’s a lot of money.”)  or Roger’s cunning (“How’d you get in here?” “Money.”), though just about all of Season 7’s best lines were spoken during “Waterloo.” Despite Don’s off-the-wall hallucination to cap the episode, even our nearly-fired hero took a backseat to the ladies.

Many of Season 7’s arcs reached a satisfying point of pause, if not resounding finality. The most obvious and welcomed was Peggy, who had a handful of marked moments for her frustrated character, but Megan, Sally, and Joan all stood up for themselves, showing how both Weiner and the characters are focusing on the future, now. Joan’s m.o. has been clear from the get go. After starting this season by joining the sales team upstairs and establishing her rights and power as a partner, Joan reinforced her position as a ruthless, but efficient businesswoman by voting for Don’s departure and then for his inclusion when promised riches in the new deal (after all, she’s “tired of him costing me money”). It may not have been what fans wanted — or Roger — but its fitting for a woman looking out for her own well being.

Megan could have taken a lesson from her. The struggling actress sat on her deck in the Hollywood hills, overlooking a city she’s failed to conquer as thoroughly or quickly as she did New York — or, more aptly, not looking at it. There, she had her way. She was an actress, then a secretary, then an ad woman, then an actress again. She could do no wrong, even snagging Don against all odds and without much initial effort. Now, she’s on her own in a strange land with doors shutting in her face left and right. Her fate, and how much attention is paid to it, will be one of the big questions leading into the second half of Season 7. Was that it for Megan, after she said to Don, “You don’t owe me anything,” or will there be a revived romance in the couple’s future? It’s hard to tell, but there was something sweet about the finality of the phone call.

Sally, perhaps, was the most curious of the progressive women. Her hots for the very beefy young man visiting with his family was evident from the start, but then she pulled a very Betty Draper-esque move by showing affection to someone not expecting it. Two things stood out from the interaction, the first being the obvious role reversal between man and woman (okay, boy and girl). Sally was in command, a point emphasized by Glasses asking “What do I do now?” after she kissed him and then receiving an emasculating answer not from Sally but his mother when she yelled at him for being late to bed. Then Sally struck the classic Betty pose, holding a lit cigarette in her right arm with her left tucked against her waist, staring out into the distance with satisfaction at her impeccable decision-making.

Whether Sally grows up to be more like her mom or dad we’ll probably never know, but we do know she’s growing up. She’s getting older, and not that much wiser (as evidenced by echoing her crush’s conservative sentiments about the moon landing costing too much money, a mentality plaguing their generation through adulthood). She’s back on speaking terms with her father, but both the literal and figurative distance remains. Watching what unfolds with this wild child will be yet another enticing element of the series’ final episodes.

Thankfully, another big question mark turned into an exclamation point as Peggy solidified her place in the company and, more importantly, with herself. Peggy has had a rough year, with multiple breakdowns and a near-constant fury she can’t even explain. So every moment Don and Peggy spent in perfectly functioning professionalism arrived with relief both for her and as a viewer. From her buying beers off the night clerk in a dry Indiana hotel to flatly stating “We don’t have any alcohol” when given new responsibility from a man known for keeping everything to himself (seriously — how sweet was it that Don was looking out for her future over his own?), the new dynamic duo provided pure bliss, especially for so many fans who’ve watched them bicker year after year all the time wondering “Why can’t these two just work it out?”

Still, even with Don’s new respectful attitude, it was Peggy’s solo moments that stood out. She excelled in her role as point pitch woman, bringing home the deal with a personal touch all her own (and making a clearly uncomfortable Pete look like he was going to lose his lunch). But it was her scene with Julio that provided the episode its heart, reaching all the way back to the early days of “Mad Men” and reminding us of when Peggy had to choose between her profession and her child. As she told her intruding neighbor his mother loves him and “that’s why she’s moving,” Peggy teared up, remembering her similar decision oh so many years ago.

Was this what gave her the courage and poise to bring home the pitch a few days later? Maybe. No matter what, it’s refreshing to leave Peggy on a high note this year — could she make partner before this whole thing is over? Hell, could she be running her own company? Anything seems possible, and while we don’t want to say goodbye, it’s a welcome change to part with the glass of whiskey looking half full.

READ MORE: Review: ‘Mad Men’ Season 7 Changes ‘The Strategy’ in the Series’ Most Romantic Episode Ever