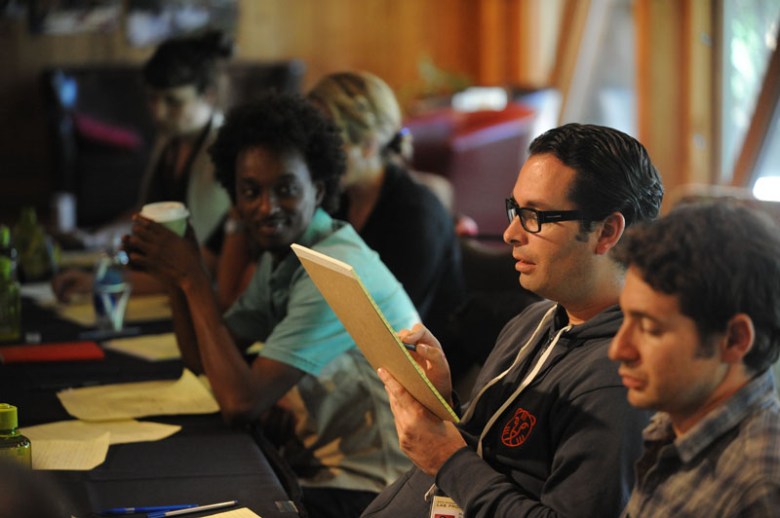 Here are the 13 projects selected for the 2014 Sundance Institute Directors and Screenwriters Labs, which will take place at the Sundance Resort in Utah from May 26-June 26:

Projects and participants selected for the 2014 Directors and Screenwriters Labs are from the United States, Brazil, Europe, China, India, Vietnam and Mexico.

Under the leadership of Michelle Satter, Founding Director of the Sundance Institute Feature Film Program, and the artistic direction of Gyula Gazdag, the Fellows at the Directors Lab work with a group of creative advisors, professional actors and production crews to shoot and edit key scenes from their screenplays. The Fellows workshop their scripts, collaborate with actors, and develop a visual storytelling language for their films. Directors Lab Fellows join 5 additional projects for the week-long Screenwriters Lab, where they participate in individualized story sessions under the guidance of established screenwriters.

“For more than 30 years, the Institute labs have challenged and fostered creative voices from around the world. Our lab mentorship continues to serve a critical role  in facilitating artist development in a place where they can take risks, challenge norms and grow to produce the best work they can,” said Keri Putnam, Executive Director of Sundance Institute.

“We are excited to support this group of singular artists from all over the world who are compelled to tell bold, relevant and impactful stories in a range of genres. It is humbling to embark on a creative journey with these talented storytellers to refine, challenge and advance their ground-breaking work, starting with the Lab and supporting them throughout the life cycle of their films,” Satter said.

Projects supported through the Directors and Screenwriters Labs receive continued, customized, year-round support from the Feature Film Program, which can include the following resources: ongoing creative and strategic advice, significant production and post-production resources, the Screenplay Reading Series, the Work in Progress Screening Initiative and direct financial support through project-specific grants and artist fellowships.

In addition to the Directors and Screenwriters Labs, the Institute offers labs throughout the year and around the world for independent directors, screenwriters, documentary editors, composers, playwrights, producers and New Frontier artists.

Here is more information about the artists and projects selected for the 2014 Directors Lab (courtesy of the Sundance Institute):

Gabriela Amaral Almeida (writer/director) / The Father’s Shadow (Brazil): A nine-year-old girl with strange powers and an obsession with horror films attempts to bring her mother back from the dead as a means of connecting with her sick father.

Gabriela Amaral Almeida is a Brazilian screenwriter and director. She has directed seven short films, including The Comforting Hand and One Spring, which have screened at over 80 international film festivals. She has worked as a screenwriter for directors including Cao Hamburger, Sérgio Machado, and Marcia Faria, and is currently writing the screenplay for Walter Salles’ next feature.

Jordana Spiro (co-writer/director) and Angelica Nwandu (co-writer) / Night Comes On (U.S.A.): Angel is released from juvenile hall on her 18th birthday with a single focus: shoot the man who killed her mother.

Jordana Spiro is a writer, director, and actress currently finishing her MFA in Film at Columbia University. Her short film Skin won the Women in Film Grant at the 2013 Sundance Film Festival and screened at several other festivals including SXSW, Telluride, Palm Springs, and AFI. As an actress, she has starred in numerous films and television series, and studied drama at the Circle in the Square Theatre School in New York and the Royal Academy of Dramatic Arts in London.

Originally from Nigeria, Angelica Nwandu has travelled around the world as an advocate for foster youth after her own 12 years’ experience living in foster care. A recent graduate of Loyola Marymount University, she is a writer, a spoken word poet who has performed nationwide, the owner of her own fashion boutique, and serves on the board of the Fostering Change Organization, which seeks to define the culture of foster youth. Angelica is a 2014 Sundance Institute | Time Warner Fellow.

Sofia Exarchou (writer/director) / Park (Greece): Ten years have passed, and the Olympic Village in Athens, Greece is in decay. Among the abandoned athletic facilities and new-money tourist resorts nearby, 17-year-old Dimitris and his friends traverse Greece’s “glorious” past with the decadence of today, creating a portrait of a society unprepared for the brutal fall.

Sofia Exarchou is the writer/director of the short films Mesecina and Distance. She pursued post-graduate studies in Toulouse and at the Stella Adler Studio in New York. Exarchou is based in Athens, Greece, where she received degrees in Electrical Engineering and Film Studies. Park, which has been developed with the support of the Centre Nationale de la Cinematographie (CNC, France) and the Eurimages Council of Europe, is her first feature film. The film is slated for production in late summer 2014 in Athens.

Geremy Jasper (writer/director) / Patti Cake$ (U.S.A.): Patricia Dombrowski, aka Patti Cake$, aka White Trish, is a big girl with big dreams of rap superstardom. Stuck in Lodi, New Jersey, Patti battles an army of haters as she strives to break the mold and take over the rap game.

Geremy Jasper is a music video and commercial director, composer and co-founder of the progressive New York production studio LEGS. With his wife and creative partner Georgie Greville, he has directed VMA-nominated videos for Florence + The Machine, Selena Gomez and others, and his direction for the “Target Kaleidoscopic Fashion Spectacular” won a Cannes Gold Lion, TED Prize and was inducted into the MOMA’s permanent collection. Patti Cake$ is his debut feature film.

Oorlagh George (writer/director) / Stranger with a Camera (U.S.A. / Northern Ireland): In this dramatic thriller, an American girl is stranded in a remote village in Northern Ireland after her father is arrested on a 20-year-old murder charge tied to the IRA. Compelled by her father’s secrecy, she sets out to uncover the mysterious family history that he has kept hidden from her.

Oorlagh George is an award-winning filmmaker and artist from Northern Ireland. In 2012, she won the Academy Award for Best Live Action Short for producing The Shore, which won over 40 awards in festivals and was released in cinemas worldwide. George worked as a creative executive and in production on films including Beginners and Hotel Rwanda.

Daniel Kwan and Daniel Scheinert (co-writers/co-directors) / Swiss Army Man (U.S.A.): In this absurdist comedy, a hopeless man stranded in the wilderness befriends a dead body and together they go on a journey to get home. Kwan and Scheinert  have also been selected as the inaugural Sundance Institute | HP Fellows, in recognition of their passion for technology and innovation in independent filmmaking.

DANIELS is comprised of two guys named Daniel: Daniel Scheinert and Daniel Kwan. Together they share the writing, directing, editing, and VFX on every kind of film they can possibly tackle. They’ve been nominated for a best music video Grammy, an MTV VMA award, awarded a UK MVA for Best Music Video 2011, and a Vimeo Award for Best Music Video in 2012. Collectively their music videos (for bands including Foster the People and the Shins), short films, viral videos, and commercials have earned millions of views

Johnny Ma (writer/director) / Ten Thousand Happiness (U.S.A. / China / Canada): The sudden divorce of their 80-year-old grandparents causes three generations of a Chinese family to each re-evaluate their relationships in love, life and happiness in modern Beijing.

Johnny Ma was born in Shanghai, China and immigrated to Toronto at age 10. He is a DGA and National Board of Review student-award winning director and a graduate from the Columbia University MFA program. His most recent short film A Grand Canal screened at the 2013 Toronto International Film Festival and was nominated for a Canadian Screen Academy Award.

Jeremiah Zagar (co-writer/director) and Daniel Kitrosser (co-writer) / We the Animals (U.S.A.): Based on the bestselling novel by Justin Torres, We the Animals is about the brutal love of a multi-racial working class family, seen through the eyes of the youngest son, as he discovers his heritage, his sexuality and his madness.

Jeremiah Zagar is the co-founder of Public Record, a production company in Brooklyn. His documentary, In A Dream, screened theatrically across the US and was broadcast on HBO. His newest film CAPTIVATED: The Trials of Pamela Smart, premiered in competition at the 2014 Sundance Film Festival and will air on HBO later this year.

Dan Kitrosser is an award-winning writer and storyteller living in Manhattan. His plays include The Mumblings (published on IndieTheaterNow.com), Tar Baby, which will go on a national tour in 2014, and the upcoming Dead Special Crabs.

Artists and projects joining the Directors Lab Fellows for the 2014 June Screenwriters Lab (June 21-26) are:

Ana Lily Amirpour (writer/director) / The Bad Batch (U.S.A.): In this post-apocalyptic cannibal love story set in a desert wasteland in Texas, a muscled cannibal breaks one important rule: don’t play with your food. In saturated hues and stylings of the 80’s & 90’s and with a wicked techno & western-laced soundtrack, The Bad Batch is kind of like Road Warrior meets Pretty in Pink… meets Gummo.

Ana Lily Amirpour has a varied background in the arts including painting and sculpting, and was the frontwoman of an art-rock band before she eventually moved to Los Angeles to make films. In 2014, her debut feature film, A Girl Walks Home Alone At Night, described as the world’s first Iranian Vampire Western, premiered in the NEXT section of the Sundance Film Festival and opened the Lincoln Center’s New Directors/New Films Festival at MoMA in New York.

Karrie Crouse (writer) and Will Joines (director) / Dust (U.S.A.): Trapped by increasingly horrific dust storms, a young mother haunted by the past becomes convinced that a mysterious presence is threatening her family and takes extraordinary measures to protect them.

Since graduating from the University of North Carolina School of the Arts School of Filmmaking, Will Joines has become one of the most sought after music video directors working in New York. Known for his arresting visual style and imaginative narrative approach, Joines’ award-winning videos for bands including The Soft Moon and ExitMusic have screened extensively both domestically and abroad.

Fernando Frias (writer/director) / I’m Already Not Here (U.S.A. / Mexico): Following the death of his older brother, a teenage Mexican boy is forced by his mother to migrate to New York City. When he arrives, he quickly realizes that the violence plaguing his home is nothing compared to the feelings of alienation and loneliness he experiences in America.

Hong Khaou’s debut feature film Lilting premiered in World Cinema Competition at the 2014 Sundance Film Festival where it also won the Cinematography Award. He is also the director of three short films, including Spring, which premiered at the 2011 Sundance Film Festival, and Summer, which premiered at the 2006 Berlinale. This year, Khaou was named one of the Stars of Tomorrow by Screen International.

Vasan Bala (writer/director) / Side Hero (India): A teenager who lives by the codes of his beloved kung fu movies must find his own way when he discovers that he may never get to be the hero.

Vasan Bala was born and raised in Mumbai. Both his father and grandfather were film buffs whose love of film inspired his own. Bala has collaborated in various capacities with filmmakers including Anurag Kashyap, Michael Winterbottom, and Danis Tanvoic. His debut feature as a writer/director, Peddlers, screened in Critics Week at the 2012 Cannes Film Festival.