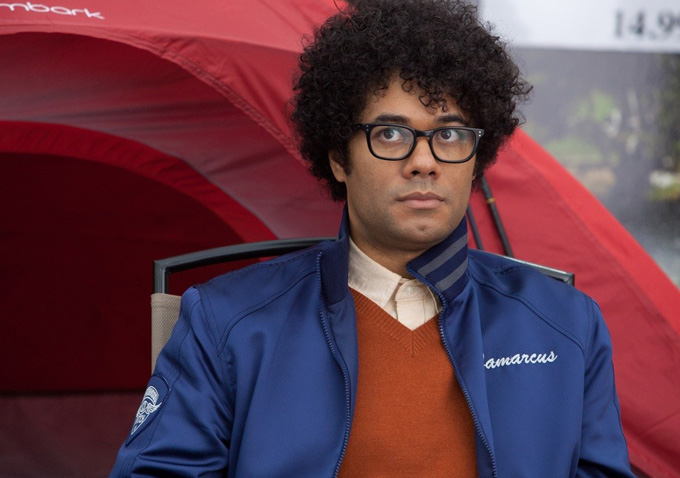 On paper, “The Watch” sounds like a no brainer of potential awesomeness. Ben Stiller, Vince Vaughn, Jonah Hill and Richard Ayoade play mild-mannered suburban dudes who have to fight off an alien invasion—what could go wrong? Well, pretty much everything and simply put, it wasn’t good. And last year’s “This Is The End” (also featuring Jonah Hill) took that similar concept to much wilder, funnier places. And indeed, “The Watch” pretty much tanked at the box office, barely making back its budget. So what was it like making? Well, with his inventive and unique “The Double” in theaters, Ayoade has referred to being involved in “The Watch” rather… clinically…..

“I didn’t see it. And then it started to become an affectation that I hadn’t seen it. I only went for a couple of days for press. I could go a quarter of the way up the red carpet, and then I had to leave before anyone else got there —like the shortest prom ever, leaving at 7:00 p.m. It’d be weird to go and see it in a cinema, yourself, and I can’t just sit in my house and watch it. I generally try to avoid watching things I’m in. So I’m aware of its existence in the world. I’m aware that it’s not, perhaps, seen as mid‑period Fellini,” he told Rolling Stone.

“I like all the actors in it, and I like [director] Akiva [Schaffer]—for me, when I’m in something, my job is just to serve the director and do what they want,” Ayoade continued. “It’s kind of like giving a tissue sample. You have no idea what will be done with it. That’s the experience for me of being in something that I’m not involved in the writing or directing of. You kind of go, ‘You seem happy, okay!’ “

So it’s not an outright diss of the movie, but more a take on the surreal experience of making something where he doesn’t have as much control as he might be used to. But the comments are interesting especially considering Stiller was a producer on “Submarine.” Controversy? We doubt it, but it’s always fascinating to hear how things can really be on set, even for something as seemingly innocuous as “The Watch.”

This Article is related to: News and tagged Richard Ayoade, The Watch