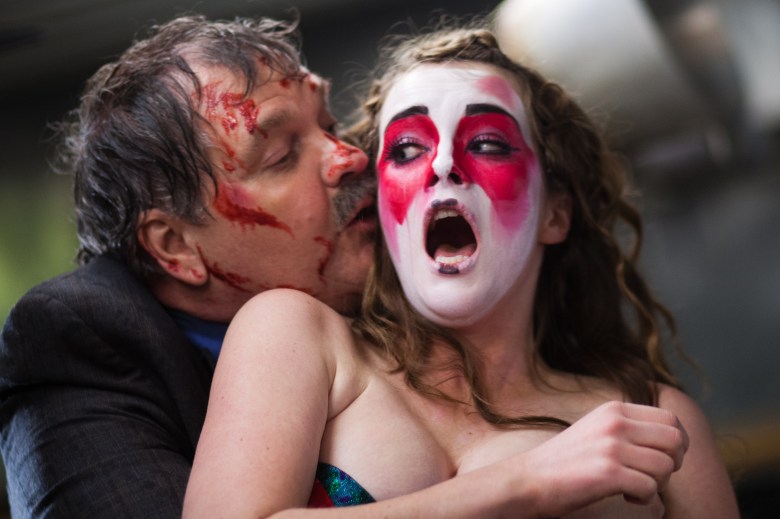 Editor’s Note: This post is presented in partnership with Time Warner Cable Movies On Demand in support of May’s Indie Film Month. “Stage Fright” is currently available to view On Demand.

The first rousing musical number in the new musical-horror mess “Stage Fright” is clever and catchy, and it promises better things than the film ever delivers; wasting no time in unsheathing a razor-sharp sense of humor, writer-director Jerome Stable and musical director Eli Batalion give us a coterie of nerdy theater geeks, like so many “Glee” rejects gathered for a giant slumber party, singing away their troubles to each other:

“What school bullies? It was…my…dad…”

They come to the camp where they can learn how to sing and be themselves (at least for once a year), and where “everyone is gay,” but not “gay like that.” These opening moments are soaked in acerbic wit, as the children sing about the “slew of hurtful low-blows” they encounter on a daily basis. Virtually every line is imminently quotable here, and one little girl with a lisp steals the show. The guy who runs the camp is played by Meat Loaf, whose mere presence elevates the opening scenes to something kind of magical.

Unfortunately, the magic ends thereabouts. All revved up with no place to go, the film spends the next hour struggling to regain the fun of the first twenty minutes.

Our heroine is Camilla (Allie MacDonald), who makes up for her lack of personality with a beautiful singing voice. (This isn’t a knock on MacDonald, who does what she can with the role.) Camilla and her brother Buddy (Douglas Smith) work as the camp’s kitchen staff, even though their mother Kylie (Minnie Driver), an actress who was about to catch her big break, gets stabbed in the mouth in the film’s opening scene. (One might think that her children would avoid the theater, but alas.) Soon enough a masked killer shows up and he’s getting away with murder. The killer sings like Ozzy as he shreds a guitar solo — or, in this case, some girl’s throat. It’s obvious he has rock ‘n’ roll dreams coming through, but he belongs in a different film, something more akin to Brian De Palma’s “Phantom of the Paradise.”

The initial trailer for “Stage Fright” had horror fans in a tizzy; the film appeared to be a cult-classic in the making, something that conflated the gaudy gory goodness of a cheapie ’80s slasher flick with the histrionics of a musical, all threaded-together with the sardonic irony of “Scream” or “Cabin in the Woods.” It quickly becomes apparent, however, that Stable and Batalion won’t be able to synthesize the music and the horror. The music takes center stage, and when the horror elements come rushing in from the aisles near the end and severed limbs replace the vocal harmonies, it feels like a wrong note is being sustained.

The concept of a horror-musical isn’t new, and yet it’s also never had its masterpiece. “Phantom of the Paradise” is often cited as a highlight of the sub-genre, and “Rocky Horror Picture Show” is an undisputed classic, though its horror elements are incidental to its shock/schlock humor. But there hasn’t been a break-through horror-musical — no “Halloween” or “Exorcist” or “Jaws” or “Alien” or “Night of the Living Dead” to establish the sub-genre. “Repo! The Genetic Opera” (“generic opera” is more accurate) has its fans, though they aren’t a very big or convincing bunch.

Why are there no great horror-musicals? We can conflate horror and comedy— “Evil Dead,” “An American Werewolf in London,” “Shaun of the Dead,” “Gremlins,” “Dead Alive,” “Re-Animator.” Are horror and musical just not compatible?

Great horror so often relies on a sustained atmosphere—a ubiquitous dread perpetuated by silence, or a sinuous and prolonged sound, often achieved through a score or keen sound design. The great horror movies have great sound, great use of empty space. They know when to be sparse and when to explode. The villains are visually memorable, the films aurally so. If you remove the music from “Halloween” or “Psycho,” you expunge the fear. William Friedkin decided to cut all of the music, save for “Tubular Bells,” from “The Exorcist” and instead focused on the sound design, piercing the quietude with sudden, jarring noises. The profound silence creates suspense and sets him up for the scares. (One of the two scores Friedkin rejected can be heard in the film’s first, infamous trailer.)

A musical can’t sustain a tone with silence because, duh, it’s a musical. And it can’t employ subtle, insidious scores because, duh, it’s a musical. Films like “Stage Fright” have the sense to know that they can’t be scary, so they lean towards comedy. But comedy isn’t easy; comedic timing requires finesse, precision, a keen awareness of your surroundings and fellow performers. Tim Curry is brilliant in “Rocky Horror Picture Show” because he manages to underplay one of the most flamboyant roles in film, surrounded by a cast of colorful, whacky characters. His facial expressions are louder than his voice could possibly be. A simple furl of his lip is all he needs. No one in “Stage Fright,” not even Mr. Loaf, has the presence and subtle timing of Tim Curry.

Maybe we’ll one day get a great horror musical, if someone can figure out how to make the music and the horror work harmoniously — that is, a bloody duet, instead of working against each other. But “Stage Fright” isn’t that film.