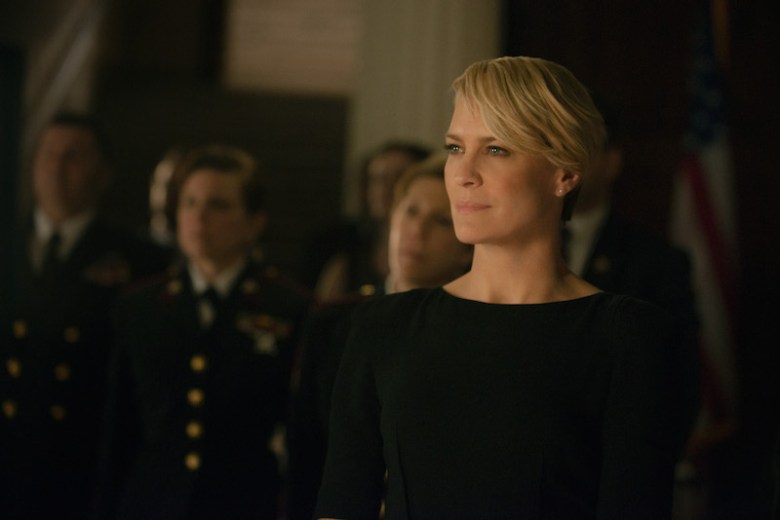 In the shadow of a giant Emmy statue, Netflix actors and directors gathered to discuss their craft — and the benefits of working for the giant streaming service — at the “Women Rule TV” panel discussion in North Hollywood Thursday night. Mere hours before the second season of “Orange is the New Black” made its debut online, stars Taylor Schilling and Kate Mulgrew appeared with two-time director Jodie Foster as well as Robin Wright (representing “House of Cards”) and Jehane Noujaim (director of “The Square”).

“I sound like I’m plugging Netflix — which I am,” Foster said during the discussion, establishing a theme of the night the executives in the audience were sure to love. It’s Emmy season after all, an unavoidable fact brought to glaring clarity in the brief, hour-long discussion featuring clips highlighting each guest’s work and a giant buffet and bar for voters outside. The only thing missing from the campaign push was buttons for guests to wear in support of their favorite show.

Still, with well spoken, intelligent, and genial guests like these, it would have been impossible to go an hour without a few important insights. Take a look below for the event’s best moments from a night that shared Foster’s favorite cable show ever (“Breaking Bad”), Wright’s thoughts on her first directing gig, and Mulgrew bonding with Schilling over that “tampon sandwich.”

Jodie Foster got her directing gig for “Orange is the New Black” via text.

Foster, a two-time Oscar winner, actually courted Netflix and “Orange is the New Black” producers in order to direct an episode of the new show.

“I read the book and called up my agent and said, ‘I’d like to be a part of that,'” Foster said. “And I never heard anything from them. Then a friend of mine, Mary Tenenbaum, sent a text saying, ‘Hey, I hear you’re in New York. Do you want to come over and see something?’ And at the bottom it said, Producer: ‘Orange is the New Black.’ And I was like, ‘Hey! I want to get on that show!’ She called them up and said, ‘Jodie wants to do the show.’ And that’s kind of how it works.”

Robin Wright and Foster think going to the movies is too big a hassle.

When asked about the constant, anytime access Netflix provides for its viewers, both Wright and Foster responded adamantly in favor of streaming content.

“I don’t want to watch it any other way, to tell you the truth,” Foster said. “I’m irritated when I have to watch anything else.”

“You don’t have to have a reservation, an appointment, anymore,” Wright added. “You go to a film and it’s like, ‘It’s at 5:45 and 8. Shoot. We can’t make either showing.’ [Netflix is available] at your whims and that is what society has become today, right? For all of us. We want it when we want it.”

Foster’s tip for auditioning actors: “Not so many props.”

After joking about Kate Mulgrew having to audition for her role as Red on “OITNB” — Schilling was shocked she had to — the group discussed the auditioning process and how it’s changing with the times. 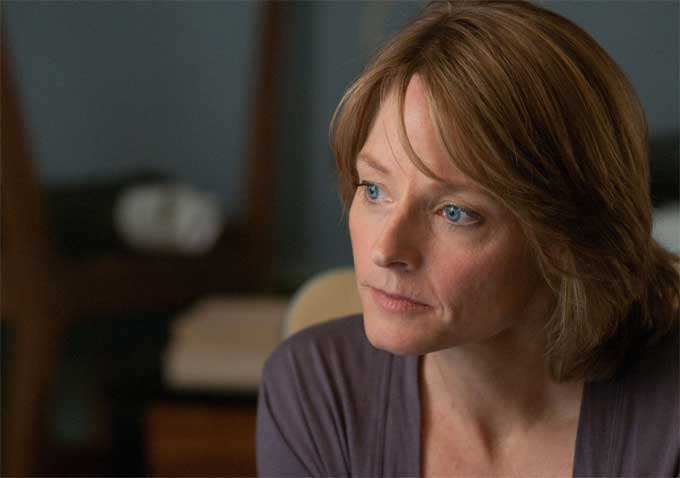 “I love auditioning,” Foster said. “Even if I know I’m going to hire the actor, I want to hear them say the words because it helps me figure out what the movie’s about, how the story’s going to evolve, how I’ll be able to shape the character differently as a director. So it’s important to me. People don’t always do it. I wish they would.”

Foster was then asked if she had any tips for actors who might be lucky enough to audition for her in the future. After a pause, Foster said, “Not so many props,” which earned a big laugh from the room full of thespians.

“With all the new technology, very often you’re not in the room with actors anymore,” she continued. “You watch them on tape. I’m sad about it. I feel like it’s not the same experience. I don’t like it, but there’s no other way to do it anymore, especially in television. You just work it in, like, ‘Oh, you’ll be sitting by the Skype and then you’ll see everything come in.’ And it’s too bad because I feel things happen in a room, the feeling in a room you don’t get from just the tape.”

Kevin Spacey recommended Wright to David Fincher as his “Lady MacBeth” for “House of Cards.”

Spacey and Wright first worked together on the 1998 film “Hurlyburly” as lovers who had sex “with their clothes on,” according to Wright. She said ever since they would see each other around town at various events and say how much they wanted to work together again.

“When we met up and Fincher called and said, ‘Hey, do you want to do this? Kevin actually suggested you to play his Lady MacBeth.’ To play with him…he sings with surprise to you. There’s always a melody, and while you’re following it like you would a beautiful classic tune, you’re always surprised when instead he just throws in some AC/DC. It’s beautifully comfortable and gloriously surprising.”

Women work best with women, and men should just back off.

Kate Mulgrew was asked about the dynamic of working on a show with mostly women, and her response was quite candid.

“I think the chemistry on our set is extraordinary,” Mulgrew said. “And I’m going to risk this and say…by virtue of the fact there are not so many men, we are free to be absolutely authentic. There’s a freedom. There’s a trust. With a lot of men…you’re very aware of yourself in a way I’m not [when it’s only women on set]. I’m only aware of what I want and what I need from Piper…I mean, that sounds bad, but I mean it in a good way.”

Taylor Schilling was asked how she felt about how little makeup appeared to be in use for “OITNB.” First, she paid compliments to the team who used plenty but made it look like none was there, before admitting to at least one moment of vanity.

“Michael, the makeup artist on the show, has an incredible way of saying, ‘Oh, that blemish is beautiful. It’s really beautiful. I really think we should keep it.’ And then I’m like, ‘Oh my God. So you’re putting no concealer on my freaking zit today?’ Because Michael thinks it’s beautiful.”

Robin Wright was “fucking scared” to direct, but decided she had to after “biting her tongue so hard” while working with directors who weren’t up to snuff.

Wright made her directorial debut this season on “House of Cards,” directing the episode right after Foster’s. She was asked what lead her to make that decision, and her answer was as honest and bold as her character on the show.

“In retrospect, I was whispering to myself, ‘Yeah, I’d love to, but I’m so fucking scared. I could never do that,’ for most of my career. Then, selfishly, you’re on set and you’re with the directors, and you’re biting your tongue so hard because you really know how the scene should be directed and blocked and you can’t because it’s not your position.”

“I feel like I learned more from David Fincher than anyone else I’ve ever worked with in my life.”

Robin Wright and Jodie Foster had nothing but praise for the season one director and executive producer of “House of Cards,” with Foster giving him the highest praise.

“I feel like I learned more from David Fincher than anyone else I’ve ever worked with in my life,” Foster said. “And I don’t direct films the same way he does. I have a different sensibility, but I don’t think there’s anybody who is a better technician or a better craftsman or knows filmmaking better than [Fincher]. He knows my job as an actor better than I do.”

“He is listening in on every table read and Beau [Willimon, the creator, showrunner, and head writer] is just sweating profusely,” Wright said about Fincher’s involvement with the show.

Foster described how he would leave very detailed notes, circling lines in the script or providing post-production suggestions for focus. She said one note simply said, “This looks like shit.”

“It changes the whole arc of the story, one of his notes,” Wright added.

Such direct criticism from such a respected director would certainly make me want to change lots of things — perhaps even my career choice.