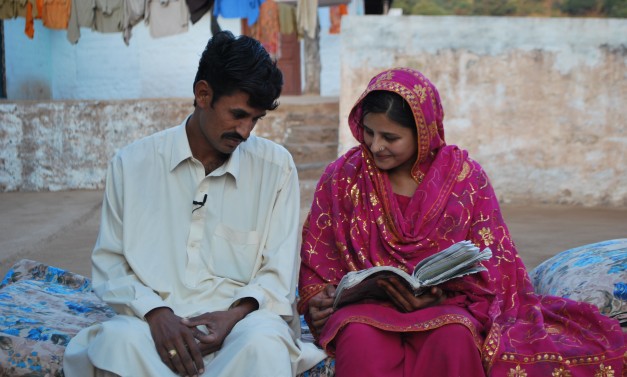 READ MORE: Chicken & Egg Pictures: The Force Behind Women Directed Documentaries at Sundance and Beyond

These films, which come from all around the world are directed by both veterans and newbies. In the past, Chicken & Egg PIctueres has awarded over $3.3 million in grants to over 160 films and has provided over 5,000 hours of assistance directly to filmmakers.

The following films are receiving follow-up grants from the organization (descriptions courtesy of Chicken & Egg):

“Among the Believers” (Hemal Trivedi and Mohammed Naqvi)

Since Pakistan’s founding, secular and fundamentalist forces have been at war in the country. A watershed moment takes place when Maulana Aziz, cleric of Pakistan’s most radical Islamic seminary, the Red Mosque, declares war on the government. The government retaliates by destroying his seminary. The film follows the fearsome yet very human Aziz on a quest to create an Islamic utopia in the country, fueling a split between secular and Islamist camps. The film also charts the coming-of-age stories of two of his students in the madrassa. Talha, 12, detaches himself from his moderate Muslim family to train as a jihadi preacher. Zarina, also 12, escapes the madrassa and joins a secular school, hoping to become a doctor. But her poverty forces her to drop out and get married. Talha and Zarina personify the hard choices between extremism and poverty that many young Pakistanis are forced to make today.
“The Babushkas of Chernobyl” (Holly Morris and Anne Bogart)

The Babushkas of Chernobyl is the story of a small group of old women who live in Chernobyl’s radioactive “Exclusion Zone.” For 28 years they have survived ‐ and even, oddly ‐ thrived on some of the most contaminated land on Earth. Why they refused evacuation after the 1986 disaster, defying authorities and seriously endangering their health, is remarkable story ‐ about the pull of home, the healing power of shaping one’s destiny and the subjective nature of risk. “The Babushkas of Chernobyl” is a documentary that offers a character‐driven, human perspective on contemporary global issues, including: nuclear power, post‐environmental disaster scenarios, women’s issues and relocation trauma.
“Baltimore in Black and White” (Mary Posatko and Emily Topper)

One night in 1972, a murder rocked a Baltimore family. Years later, Emily Topper returns to the city, seeking closure for a crime that has haunted her family over 40 years—and uncovers complex issues of race and class in the process.
“The Bill” (Ramona Diaz)
The Bill is set in the Philippines, one of the world’s poorest and most populous countries, and its struggles with reproductive health policy. The Reproductive Health Bill guarantees access to contraception, maternal care, and sex education in schools. In a country where 85% of the population is Catholic, there is unrelenting opposition from the formidable Church. Nowhere are the stakes more starkly apparent than in Fabella Memorial Hospital, one of the busiest maternity public hospitals in the world. The film intercuts between the legislature and Fabella Hospital – contrasting the sluggish pace of policy development, as lawmakers parse the language of the RH Bill, and the rampant speed of childbirth, as the hospital’s whiteboard tracks the day’s deliveries. The story is told by the legislators, the patients, and the hospital workers through a combination of immersive scenes of the hospital and footage of the Senate hearings.
“The Blind Cinema Club” (Jennifer Redfearn)

Always in Season examines the lingering impact of a century of lynching African-Americans while featuring three communities where relatives of the perpetrators and victims are working towards healing. In Laurens, SC, Rev. David Kennedy fights to close a store that sells KKK robes and neo-Nazi knick-knacks right in the middle of downtown and a mile from where his great-uncle was lynched. Meanwhile, in Monroe, GA, a diverse group of amateur actors reenact the 1946 lynching of two black couples in the very spot where the violence happened. They work to ensure that the nation never forgets the victims and any perpetrators still living are brought to justice. In Duluth, MN, Warren Read recently learned of his great-grandfather’s instigating role in the 1920 lynching of three innocent men and meets with other relatives of the perpetrators and victims to uncover long-held family secrets of the violence as they try to reconcile.

“Catching the Sun” (Shalini Kantayya)
In a city where oil spills, ecological red-alerts, and poverty are commonplace, “Catching the Sun” asks the hard questions of how a clean energy economy may actually be built, through the stories of unemployed American workers seeking to retool at a solar power jobs training program in Richmond, California. Over the course of a solar training program and subsequent search for jobs, “Catching the Sun” explores the hope and heartbreak of unemployed American workers pursuing jobs in the clean energy economy. Through interwoven character dramas, “Catching the Sun” illuminates the promises and challenges facing this emerging industry. “Catching the Sun” tells the story of environmental transformation from the perspective of workers who may build a solution with their own hands, and their successes, failures and challenges speak to one of the biggest questions of our time: will America actually be able to build a clean energy economy?
“Cocaine Prison” (Violeta Ayala)
From inside one of Bolivia’s most notorious prisons a cocaine worker, a drug mule, and his younger sister reveal the country’s relationship with cocaine. Cocaine Prison bridges the ever-widening gap between the North and the South and brings a new perspective to the War on Drugs as it is waged in the Andes.
“Democrats” (Camilla Nielsson)
An historic project has been underway in Zimbabwe. For the past four years, the opposition has tried to wrest powers from the 90-year-old dictator Robert Mugabe, and lead the country into a modern democracy, not through violence, but through democratic means by writing the country’s new constitution. Democrats is filed inside the political engine room of the constitutional reform process, and depicts how a democratic struggle against dictatorship plays out in practice. The opposition party is fighting for human rights and the separation of powers, while the ruling party wants to keep Mugabe and his horror regime intact. In the film, we follow the two top politicians, from respectively the opposition and the ruling parties, as they lead their country through the constitution making process. They are political enemies, but united in their struggle for political success.
“Southwest of Salem: The Story of the San Antonio Four” (Deborah Esquenazi)
Southwest of Salem: The Story of the San Antonio Four documents the painful reality of how homophobia, “junk science,” and the Satanic ritual abuse panic of the late 1980s and early 1990s created a frenzy of pressure to punish four innocent gay women. Three of these women were sentenced to 15 years in prison while the fourth woman was sentenced to 37 years behind bars. The film also explores the long, tedious, yet dramatic process required in Texas to exonerate falsely convicted innocents.
“Sonita Means a Traveling Swallow” (Rokhsareh Ghammaghami)
Sonita is an 18 year-old undocumented female Afghan immigrant who lives in Iran. She has formed a rap group with friends as an outlet for their problems, while her family plans to marry her off for 6,000 USD.
“When Buddha Comes to Africa” (Nicole Schafer)
A glimpse into the complex relationship between China and Africa through the story of a Malawian teenager growing up in a Chinese Buddhist orphanage and a Buddhist monk on a mission to save orphans and spread his faith in Africa.
“When Two Worlds Collide” (Heidi Brandenburg and Matthew Orzel)
“When Two Worlds Collide” is about a young indigenous leader who resists the environmental ruin of Amazonian lands by big business. Forced into exile and facing life in prison, his quest reveals conflicting visions shaping the fate of the Amazon and the climate future of our world.
“Yula’s Dream” (Hanna Polak)
An extraordinary, thirteen-year journey about Yula growing up in one of the world’s bleakest places – Moscow’s garbage dump “svalka” – and her dream of getting out one day, of having a family and a normal happy life. Yula’s Dream is a coming-of-age story, both literal and metaphoric; a story of one’s blazing desire for love and healing the fever of rejection.