Here Are All the Movies Opening Today, June 27th. What Will You See? 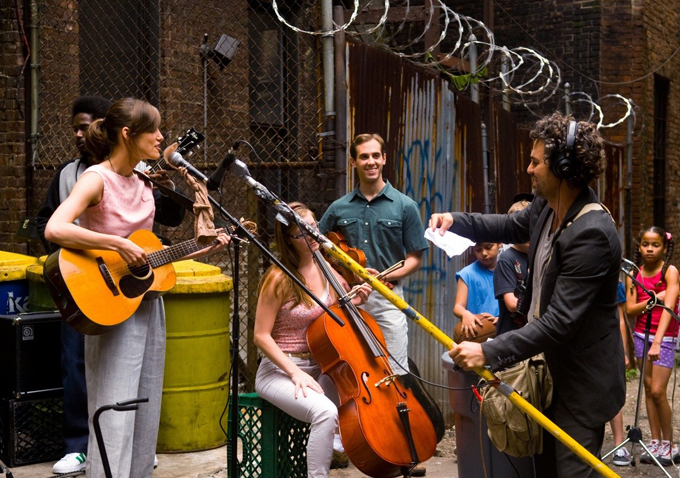 Here are the films opening theatrically in the U.S. the week of Friday, June 27th. (Synopses provided by distributor unless listed otherwise.)

The Pleasures of Being Out of Step
Director: David L. Lewis
Synopsis: “Nat Hentoff is one of the enduring voices of the last 65 years, a writer who championed jazz as an art form and who also led the rise of ‘alternative’ journalism in America. This unique documentary wraps the themes of liberty, identity and free expression around a historical narrative that stretches from the Great Depression to the Patriot Act. At the core of the film are three extraordinary, intimate conversations with Hentoff. Commentary and perspective are offered through additional interviews with such luminaries as Amiri Baraka, Stanley Crouch, Floyd Abrams, Aryeh Neier and Dan Morgenstern. Interwoven through it all is the sublime music of Duke Ellington, Miles Davis, John Coltrane, Charles Mingus and Bob Dylan, along with never-before-seen photographs and archival footage of these artists and other cultural figures at the height of their powers.”
Theatrical Release: New York

America
Director: Dinesh D’Souza and John Sullivan
Synopsis: “Political commentator, author and filmmaker Dinesh D’Souza puts forth the notion that America’s history is being replaced by another version in which plunder and exploitation are the defining characteristics. D’Souza also posits that the way the country understands the past will determine the future. Using historic re-enactments, D’Souza explores the lives and sacrifices of some of America’s greatest heroes, including George Washington and Frederick Douglass.”
Theatrical Release: Houston and Atlanta

Bound by Flesh
Director: Leslie Zemeckis
Synopsis: “Conjoined twins Daisy and Violet Hilton were once the cream of the sideshow crop. Taught to sing and dance at an early age, the winsome duo ascended through the early 20th-century vaudeville circuit as a side attraction (working alongside Bob Hope and Charlie Chaplin as well as a memorable turn in the Tod Browning classic “Freaks”) before a cascade of unscrupulous management and harsh mistreatment brought their careers (and lives) tumbling down. This engrossing glimpse into a bygone era is filled with fascinating interviews and rare archival footage.”
Theatrical Release: New York and Los Angeles (opens in Seattle, Phoenix, San Antonio, Santa Fe and Columbus, OH throughout July)

The Breakup Guru
Director: Deng Chao
Cast: Deng Chao, Mini Yang, Betty Sun
Synopsis: “One is a bum, one gets by selling self-help DVDs: Mei Yuan Gui is a guy who survives by leeching off his girlfriends; Ye Xiao Chun is a girl who sells DVDs for a living. Two people in the bottom rungs of society meet by accident one day when the guy saves the girl, and so begins the most hilarious, silly and touching love story.”
Theatrical Release: Various (including Vancouver, Seattle, San Francisco, Los Angeles, Chicago, Toronto, New York and Washington, DC)

Drones
Director: Rick Rosenthal
Cast: Matt O’Leary, Eloise Mumford
Synopsis: “A low-budget American indie with only a handful of characters seems an unlikely vehicle with which to express the complex issue of modern warfare, but Rick Rosenthal’s modest, ambitious Drones does just that. It begins in the Nevada desert, where new girl Sue Lawson (Eloise Mumford) joins airman Jack (Matt O’Leary) in a hot, windowless bunker from which they manoeuvre unmanned drones across the plains of Afghanistan. Their first day at work is awkward but polite, with Jack all too aware of Sue’s privileged status as daughter of a well-respected general. This, however, will be no ordinary mission: as they train their sights on an unarmed terrorist suspect, a power struggle erupts between the smart, sophisticated Sue and the dogged, blue-collar Jack. As tensions escalate, Rick Rosenthal’s gripping drama keeps us guessing as to who really has the upper hand.”
Theatrical Release: Los Angeles

The Internet’s Own Boy: The Story of Aaron Swartz
Director: Brian Knappenberger
Synopsis: “As a teenager, Aaron Swartz was a computer-programming prodigy with an unquenchable thirst for knowledge. After emerging as a pioneer of Internet activism, education, and politics, he was indicted on multiple federal charges in 2011 and 2012, setting off a complex chain of events that left the Internet community reeling. Shortly thereafter, at the age of 26, Swartz was found dead of an apparent suicide in his Brooklyn apartment. His family, friends, and supporters immediately blamed the prosecutors of the case, who aimed to put him in jail for 35 years and brand him a convicted felon for life. Swartz was persecuted for the very rights and freedoms for which he stood, and that ultimately broke him.” [Sundance Film Festival]
Criticwire Grade Average: B+ (10 reviews)
Theatrical Release: Various (including Los Angeles, New York, Boston, Toronto, Chicago, Denver, Miami, Cleveland and Atlanta)

Jackpot
Director: Magnus Martens
Cast: Kyrre Hellum, Mads Ousdal, Henrik Mestad, Arthur Berning, Andreas Capellen, Peter Andersson
Synopsis: “Terrified, bloodied, and clutching a shotgun, Oscar Svendsen awakes and emerges from underneath a dead body. He finds himself in the midst of a crime scene in what used to be a respectable strip joint, surrounded by corpses and staring down the barrel of a gun pointed at him by a detective with the National Criminal Investigation Service. Naturally, Oscar is taken into custody, and during his interrogation he timidly relates a bloody story of betrayal, murder, and a soccer lottery prize that was meant to be shared with three ex-con co-workers. But is this the whole story?” [Tribeca Film Festival]
Criticwire Grade Average: B- (5 reviews)
Theatrical Release: New York

La Bare
Director: Joe Manganiello
Synopsis: “Since the birth of the male review in the late 1970s, the greatest male strippers in the world can all be traced back to one club… La Bare Dallas. La Bare gives you a behind the curtains look at the lives, loves, laughs, and loss of the current crop of dancers as well as the man that’s been going strong for over three decades since the club’s inception, Randy ‘Master Blaster’ Ricks.”
Theatrical Release: Various (including New York, Los Angeles, Dallas, Atlanta, Pittsburgh, Philadelphia and Washington, DC)

Nothing Bad Can Happen
Director: Katrin Gebbe
Cast: Julius Feldmeier, Sascha Alexander Gersak, Swantje Kohlhof, Annika Kuhl, Daniel Michel
Synopsis: “The young Tore seeks a new life in Hamburg among the religious group called The Jeus Freaks. When he by accident meets a family and helps them to repair their car, he believes that a heavenly wonder has helped him. He starts a friendship with the father of the family, Benno, and soon he moves in with them at their garden plot, not knowing the cruelty there is to come. True to his religious belief Tore stays with them although the increasing violence by Benno is torturing him…”
Criticwire Grade Average: B- (5 reviews)
Theatrical Release: New York, Los Angeles, Houston, San Antonio, Austin, Kansas City and Kalamazoo

Postman Pat: The Movie
Director: Mike Disa
Cast: David Tennant, Rupert Grint, Jim Broadbent, Stephen Mangan, Ronan Keating, Robin Atkin Downes, Susan Duerden
Synopsis: “Like always, Postman Pat is happily going about his duty delivering letters and parcels around the fictional town of Greendale. One day, auditions for the TV talent show, “You’re the One”, are held in Greendale, which Pat manages to pass. With Pat required to be away from Greendale whilst participating in the contest, various Patbot 3000 robots are deployed to take Pat’s postal duties. This soon turns out to be an evil plot to take over the world, which Pat must now stop.”
Theatrical Release: New York and Los Angeles

Redemption Trail
Director: Britta Sjogren
Cast: Lily Rabe, LisaGay Hamilton, Hamish Linklater, Jake Weber, Asta Sjogren-Uyehara, Juliette Stubbs, Stephanie Diaz, Beth Lisick
Synopsis: “In this contemporary Western, two powerful, yet deeply troubled women — refugees from political and personal trauma — flee a past that haunts them. The daughter of a murdered Black Panther revolutionary, Tess, (LisaGay Hamilton) lives off the grid on a Sonoma vineyard, fiercely detached from all connections. Her hermetic life cracks when she gives reluctant shelter to a desperate young woman, Anna (Lily Rabe) who has attempted suicide in a nearby woodland. An unlikely alliance forms between the two, where other close relationships have failed — David, Anna’s husband, (Hamish Linklater) and John, Tess’ employer (Jake Weber), cannot break through their walls. But the very difference between the two women opens them up to a new vision of themselves, as not only survivors, but as heroes capable even of a thrilling shoot-out in the name of outlaw justice. Reclaiming freedom, and life, they plunge forward, towards an unknown, transformative horizon.”
Theatrical Release: Los Angeles

Snowpiercer
Director: Bong Joon-ho
Cast: Chris Evans, Jamie Bell, John Hurt, Tilda Swinton, Alison Pill, Octavia Spencer, Ewen Bremner, Luke Pasqualino, Song Kang-ho, Kenny Doughty, Steve Park, Clark Middleton, Adnan Haskovic, Tómas Lemarquis, Jim Hightower, Ko Asung, Ed Harris
Synopsis: “When Bong Joon-ho first opened Jean-Marc Rochette’s comic ‘Snowpiercer’ in a Seoul bookshop, he supposedly devoured all three volumes on the spot. Eight years later, the French comic has been made into the most lavish Korean film of all time, a parable on the final days of humankind. Seolguk-yeolcha describes an impending ice age caused by human hand, whose last survivors are left circling the earth in a nonstop express train. The rich are in the front carriages and the poor – from whose perspective the story is told – at the back. If you walk along a moving train from back to front, you end up travelling faster than the train itself relative to the Earth. This is the dynamic force upon which Bong’s film thrives: there’s only one direction in which this revolt can go and it’ll be doomed to failure if its speed doesn’t exceed the reaction. With its impressive cast, breath-taking artificial landscapes, fantastic make-up, over-the-top décor, fresh, witty dialogue and a healthy portion of humour, Bong Joon-ho gives back to cinema what the Lumière brothers themselves already used to impress their audiences: the sheer force of the machine.” [Berlin International Film Festival]
Theatrical Release: New York, Los Angeles, San Francisco, Austin and Seattle

Transformers: Age of Extinction
Director: Michael Bay
Cast: Nicola Peltz, Mark Wahlberg, Stanley Tucci, Frank Welker, Miguel Ferrer, Jeffrey Combs, Mark Rolston, Sophia Myles, Jack Reynor, Li Bingbing, Titus Welliver, Peter Cullen, John Goodman, Ken Watanabe
Synopsis: “TRANSFORMERS: AGE OF EXTINCTION begins after an epic battle left a great city torn, but with the world saved. As humanity picks up the pieces, a shadowy group reveals itself in an attempt to control the direction of history…while an ancient, powerful new menace sets Earth in its crosshairs. With help from a new cast of humans (led by Mark Wahlberg), Optimus Prime and the Autobots rise to meet their most fearsome challenge yet. In an incredible adventure, they are swept up in a war of good and evil, ultimately leading to a climactic battle across the world.”
Criticwire Grade Average: C- (4 reviews)
Theatrical Release: Wide

Missed last week’s? Here are all the releases from the weekend of June 20th.