LAFF Review: Moving Danish Drama 'Someone You Love' Proves it's the Singer, Not the Song 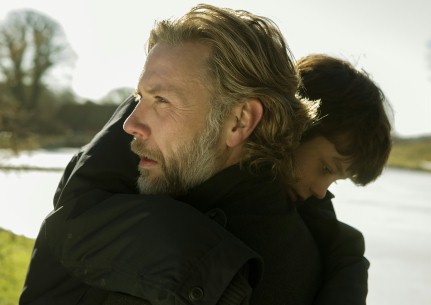 While the Danish director Pernille Fischer Christensen’s “Someone You Love” doesn’t tread any new ground in its tale of heartbreak, loss and discovery, it’s also a rich and engaging demonstration of how commitment, craft and execution can create something worthy of note despite any seemingly initial familiarity.

The movie is anchored by the stalwart acting work of Mikael Persbrandt as Thomas Jacob, the fictional singer-songwriter icon at the center of the film. As we open, Jacob’s landing in Denmark, jetting in from his usual base in L.A. to make a new album with Molly Moe (Trine Dyrholm) the producer-writer-collaborator he’s known for years. He has his patient manager Kate (Eve Best) in tow; he’s tending to a few minor tasks and appearances before he’ll to go into the studio and work; a brief meeting with his long-estranged daughter Julie (Birgitte Hjort Sørensen) and her son Noa (Sofus Rønnov) is just one of them, lending money and maintaining his distance.

Watching him take solitary possession of a massive Danish castle as his working accommodations, we quickly get that Thomas’s need for solitude is part of him, a mix of his thorny temperament and his own six years of sobriety — and his every fiber is challenged. There’s a lot to like in Persbrandt’s performance, and in Thomas as cleverly written by collaborators Kim Fuzp Aakeson and Christensen. We buy Thomas as international rock star; he’s got the concert arrangements and road-tested Zen calm of Leonard Cohen, but the gruff blues-loving hard-living past of the late Warren Zevon, too. (The musical arrangements and new music for the film — by Tina Dickow, Marie Fisker and Christensen and many others — are also superlative, not only plausible but pleasurable.) He’s not necessarily the best person to talk to Noa about his life and his mom, but he’s also all Noa has.

There’s also a lot to be said for Christensen’s direction — not merely in his excellent collaboration with his actors, but also for the delicacy of his camerawork and shooting style. A lot of the movie unfolds in glorious moments of chiaroscuro shadow, courtesy of cinematographer Laust Trier-Mørk (“The Hunt,” “Teddy Bear”), and dual editors Janus Billeskov Jansen (“The Act of Killing,” “Putin’s Kiss”) and Anne Østerud (“Pusher,” “The Girl With The Dragon Tattoo”) help maintain a crisp, quick flow to the film — not unlike a song — that keeps the internal rhythm of the film tight as a well-tuned guitar string.

The late Phillip Seymour Hoffman once summed up his work in the superb “Love Liza” as being the tragedy of our objection to suffering and catharsis, his portrait in the film of a gas-huffing widower, to him, just a small example of “All the things people will do instead of saying ‘Boo Hoo.'” In that way, yes, Thomas’ dramatic arc is remarkably conventional — but the power and passion that Persbrandt’s performance pours on-screen is too captivating to ignore, even if the internal rhymes and thematic chimes of the plot and drama feel too familiar to the ear.

The other actors are superb; you don’t just believe them, you in many cases believe in their years of connection and conflict, argument and affection; Best and Dyrholm portray two very different women dealing with a very difficult man, and yet they’re still there as characters in their own right, not merely functionaries on Thomas’ journey.

Ronnov also delivers in a part that, a few shades of grey in either direction, could have fallen into minimalism or stumbled into melodrama. Rønnov doesn’t let either happen. Tough but tender, deftly made out of both music and silence, “Someone You Love” makes some smart changes and harmonizes its character’s voices to find true feeling,  beauty and charm as a song you’ve heard the like of before still rouses you with a hard-earned big finish.

“Someone You Love” had its U.S. premiere this week at the L.A. Film Festival. It does not currently have U.S. distribution.