LAFF Review: 'The Young Kieslowski' is Yet Another Pregnancy Comedy 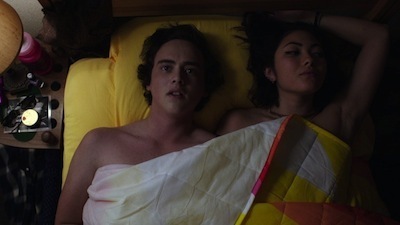 Stories of unplanned pregnancies have an inherent pull to them, especially when the baby’s potential parents are college students. Taking that basic premise and wrangling some laughs, however, is the difficult task set before Kerem Sanga’s “The Young Kieslowski,” a film that succeeds in finding a gentle center, but is ultimately handicapped by its choice of protagonist.

Given its festival premiere’s proximity to the release date of Gillian Robespierre’s “Obvious Child,” it’s difficult not to see the two films as linked. Their setups are not identical, but seeing how effectively Robespierre was able to show the anxieties of a woman facing an unexpected baby, there’s a sense of added pressure in making the experiences of a potential father just as compelling.

In this case, that young male is Brian Kieslowski (Ryan Malgarini), an unassuming CalTech freshman unfamiliar in the ways of love and women. At his first college party, he meets the affable and inebriated Leslie (Haley Lu Richardson). They chat long enough for him to escort her home and get along well enough for her to ask him to stay while she sobers up. After a night of flirting and deep conversation, the two share a bit of dawn’s early passion. Brian departs with his head held high and, in a bit of narrative convenience, proceeds to lose Leslie’s number.

As the two move on after their brief encounter, Leslie faces the first few bouts of morning sickness and gets a fateful doctor’s visit confirmation of the cause. After a few weeks of blissful ignorance in the world of Brian, Leslie tracks him down to break the news that she’s carrying the product of their fanciful few hours together: a healthy pair of twins.

Their first talks about how to proceed with this new development showcase an easy rapport between Malgarini and Richardson. There isn’t much in those talks that haven’t been said in similar movie conversations. But as Brian and Leslie move through their shifting feelings toward each other, there are genuine playful qualities on display, even if the script doesn’t always have a solid handle on where either of them stand.

The ripples of Leslie’s choice to keep these babies extends to the parents of the parents-to-be. As the kids inform their families of their unborn children, we meet Leslie’s skeptical father (James Le Gros), who’s equally defensive and abrasive. Meanwhile, Brian’s cancer-fighting mother and emotionally-cool father (Melora Walters and Joshua Malina) see a little more autonomy in the young couple’s decision. To the film’s credit, the two kids’ upbringings are different enough, but don’t play out as a drastic contrast of personal values that would have pushed the material into preachy territory.

As a comedy, “The Young Kieslowski” works best during its simpler moments. Brian’s alpha-male/braniac karate buddy Charles (John Redlinger) is just enough of a distinctive character to shine through in his few scenes, when the quips stem organically from Brian’s predicament. Smaller touches, like Brian’s split-second, non-verbal reaction to Leslie’s pregnancy admission, stand out as the film’s strongest moments. Less subtle imaginary sequences (an alternate version of events during a dinner table scene and an imagined lecture from Leslie’s father) seem forced and out of place within the film’s natural flow. Attempts to draw some chuckles out of the weird tonal shifts in Brian’s world similarly come up short.

Even though a few ancillary characters display their various foibles, the story chiefly belongs to Brian. The liberal use of voiceover, particularly during the pair of meet-cute montages, cements the idea that the narrator is in control in the telling of his own story, however lost he may sometimes feel. You could even argue that the biggest factor in Leslie’s fate (and the resulting fate of the pregnancy) comes from one of Brian’s decisions. Those expecting a balanced perspective might be tickled by the couple’s chemistry but disappointed when the film opts not to make that relationship more central to the plot.

Behind all the score-fed emotional beats, “The Young Kieslowski” comes down to a college freshman feeling adrift in the face of a great crisis.  The title character’s shifting outlook gives way to the idea his crisis is, at best, the film’s third most-compelling one. There are points when Brian’s exploits overlap with his ever-changing number of family members and generate some real warmth. But a good amount of the real emotional heft seems to lie within the moments in between what appears on screen.

“The Young Kieslowski” premiered this weekend at the L.A. Film Fest. It does not currently have U.S. distribution.