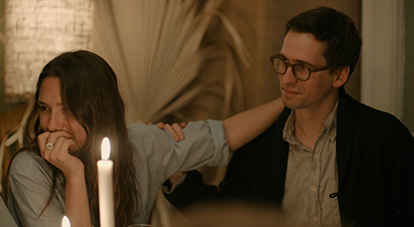 Thanksgiving is a holiday marked by family, friendship, and gratitude for the ones we love and the things we have, but in the world premiere trailer for Rooftop Films’ “Thanksgiving,” the titular holiday gets a dramatic spin when an idyllic Brooklyn couple faces some unexpectedly dark challenges.

Directed by up-and-comer Adam Newport-Berra, who creates an intimate, bohemian atmosphere in the film with the use of handheld cameras and tight closeups, the movie follows loving couple Amy and Alex (Samantha Jacober and Benjamin Dickinson) over the course of the holiday weekend as they encounter a surprise guest – Amy’s shaggy and defiant brother Will (Matt Chastain). As Alex and Amy’s budding love looks to take the next step, the antithetic lifestyles of Will and Alex will clash and put their relationship to the ultimate test.

Based on the trailer, it’s clear this will be one holiday that Alex and Amy will never forget. The film is screening on July 3 at Industry City in Brooklyn and will be proceeded by a musical performance from Reggie Watts and followed by a Q&A with director Newport-Berra. Head on over to Rooftop Films for tickets and more details.

This Article is related to: News and tagged Independent Cinema, Rooftop Films, Thanksgiving