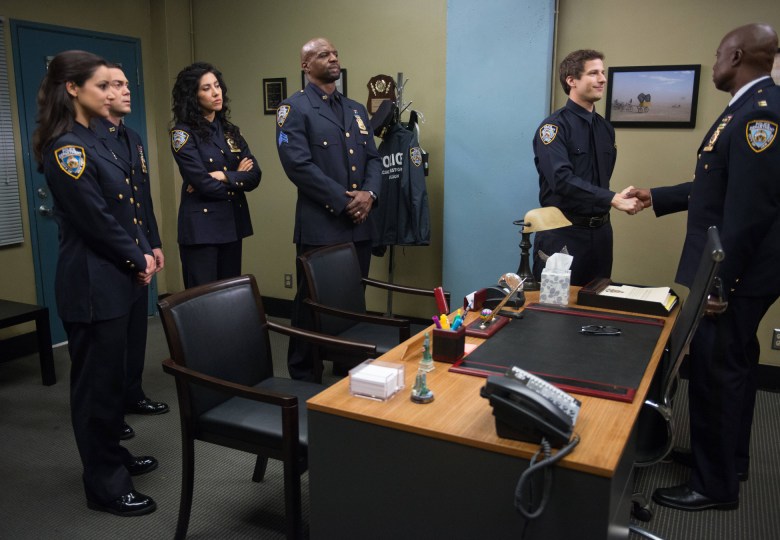 The TCA press tour is full of quirks that don’t get broadcast to a general audience, because, frankly, a general audience wouldn’t care. (Or should not find out about — seriously, you don’t want to know how much food gets served over these two weeks.)

Here is, technically, one of the less intriguing elements of this event: Each session that occurs under the TCA banner is transcribed in full by a noble human being doing good works. Yesterday, a “Brooklyn Nine-Nine” session held on the set of the Fox sitcom did not break with that tradition; however, the stenographer was seated in the eyeline of the (hilarious) cast and producers, who were delighted by her presence and called attention to it after addressing a question about the relationship between Joe Le Truglio and Melissa Fumero. The best way to showcase their reaction? Use the actual transcript she transcribed, as seen below:

DAN GOOR: Everything is all going to be entered into a court of law.

CHELSEA PERETTI: Will there be a Q and A with you afterwards? (Laughter.) I don’t know how that works.

MIKE SCHUR: How is that recording anything? There’s, like, eight total keys.

CHELSEA PERETTI: She won’t talk to us.

MIKE SCHUR: I believe you. She looks extremely competent. I just don’t understand it.

MIKE SCHUR: She has no choice. (Laughter.) Your boss is going to think you went crazy. (Laughter.)

DAN GOOR: My boss is a pig.

She clearly did, however (because that’s all from the transcript she wrote). So let us raise a glass to that noble stenographer, who did not hesitate to transcribe the people mocking her.

The TCAs continue until next week. Keep the stenographers in your prayers.