Daily Reads: A Second Chance for 'The Lone Ranger,' Why 'Lucy' Is Bad for Female-Driven Movies and More 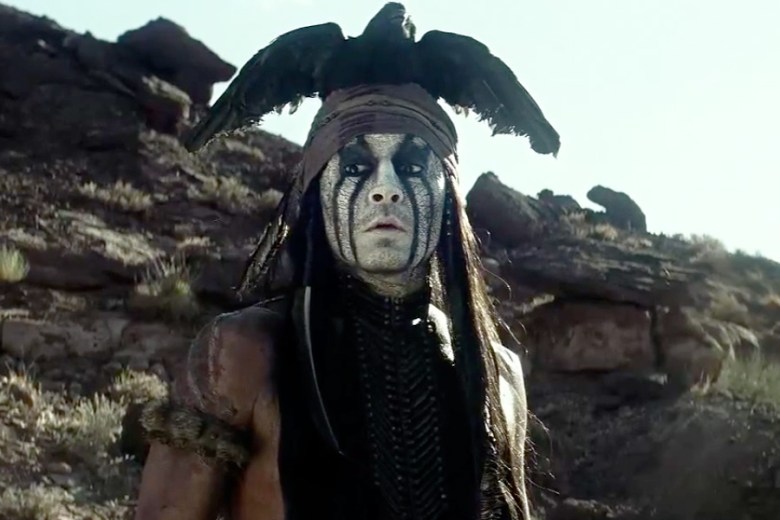 1. Revisiting “The Lone Ranger.” One year after the financial and critical failure of “The Lone Ranger,” the film has found a handful of champions (this writer included), or at very least people willing to give the film a second chance. Count The Dissolve’s Matt Singer among the latter, and he revisited the film in his One Year Later column, tackling the film’s excesses, its virtues, and its flat-out weirdness.

But just because “The Lone Ranger” was a bad investment doesn’t necessarily mean it was also bad filmmaking. True, “The Lone Ranger” is a mess; it’s way too long, with too many side characters, and Johnny Depp’s performance is problematic at best. But it’s also refreshingly bizarre, and surprisingly intimate for a film of its size. In an era when most summer movies feel focus-grouped to death, “The Lone Ranger” seems to have bypassed every corporate gatekeeper who could have (and arguably should have) objected to a million different insane things about it. If Disney had cut 30 minutes out of “The Lone Ranger,” trimming its political subtext and smoothing out its unorthodox sense of humor, it’s possible it could have salvaged a respectable moneymaker—but it would have been a far more boring film than the one we got. Read more.

2. Mourning the Way Main Characters Used to Be. “Boardwalk Empire” is on the way back to HBO for its final season, and while it’s an easy show to admire, for some it’s a hard show to love. Writer Matt Debenham is among the distant admirers, and he believes it’s because while Steve Buscemi’s Nucky Thompson is a fascinating character on an intellectual level, it’s hard to connect to him emotionally. “Boardwalk Empire” never shows an uncorrupted Nucky, so it’s impossible to mourn the good man left behind.

But with Nucky, we start with a guy who’s already made a lifetime’s worth of moral compromises in his drive to become the most powerful guy in Atlantic City. It’d be like starting Breaking Bad at the meeting with Tuco where Walt presents himself as Heisenberg and blows up the office to get back the meth that’s been stolen. Would it be an exciting start to the series? Sure. But it’d also be a wildly different series, and eventually you’d find yourself thinking: Well, what’s the big deal about Walt killing [REDACTED]? Wasn’t Walt always violent and unpredictable? Where Boardwalk starts — the eve of one man about to take a big bite of the world — is fantastic, intellectually. But it trades something more important, which is me, the viewer, worrying about a character. Read more.

3. Is “Lucy” Bad for Female-Driven Movies? The new Scarlett Johansson vehicle “Lucy” is cleaning up at the box office, and most critics have been enthusiastic about it. But while The Atlantic’s Noah Gittell counts “Lucy” as part of Scarlett Johansson’s recent handful of subversive feminist films, LA Weekly’s Amy Nicholson disagrees. Nicholson names Johansson’s character as a patronizing Strong Female Character that “that mistakes triceps for depth.”

You’d never call a male character a Strong Male Character. But replace female with male and the difference is clear: it’s the gulf between Michael Corleone and any role played by Steven Seagal. Can’t even tell Steven Seagal movies apart? That’s why. And for actresses, it’s the Grand Canyon between dimensional women like Mildred Pierce and the grim-faced Furies of modern Hollywood: Lucy, “Maleficent,” and even highbrow bores like Jessica Chastain’s Maya in “Zero Dark Thirty.” (Not to mention the seventh-billed actresses forced to play The Badass Girl in disposable action flicks.) These female roles aren’t well-rounded. They’re linear machines, and instead of describing who they are, we can only describe what they want: to punish the bad guys, to crush the king, to destroy Al Qaeda. And they’re not active—they’re reactive, each existing only to get unsmiling revenge on the man or group of men who’ve done them wrong. Read more.

4. The Complicated Maturity of “Blossom.” The NBC show “Blossom” is remembered for its goofy 90s clothing, but Slate’s Willa Paskin believes that the show displayed a greater sense of maturity than many give it credit. Paskin discusses how the show twists the family values show into a wiser and more emotionally honest series, its good-natured and lively protagonist, and how it deals with life lessons.

“Blossom,” like any sitcom with teenagers, features lots of lessons learned, but most of those lessons skirt a cheesy “Full House” fate because they aren’t overly simplistic. (As the show went on, and Blossom got older, it started tackling Very Special Issues like alcoholism, assault, divorce, bulimia, and gun control, a little more heavy-handedly.) In the first season, Blossom and Six go to a make-out party instead of a movie and get busted. Blossom gets grounded, but has a very nuanced conversation with Nick about lying, which includes Blossom asking a parental brain-teaser: “Do you really think it’s possible for a kid to go through her teenage years without lying to her parents?” At the end of the episode Nick and Blossom have talked the incident through, but they haven’t reached an easy conclusion or declared that she’ll never lie again. Read more.

5. James Brown’s Best Film. The new James Brown biopic “Get On Up” is getting respectable reviews, particularly for Chadwick Boseman’s performance as the Godfather of Soul. But even the best performance can’t quite match the real thing, and Brown’s most electrifying filmed performance was live at the Teenage Awards Music International (or T.A.M.I.) Show in 1964. David Remnick of the New Yorker wrote about how his performances of “Please, Please Please” and “Out of Sight” made closing act The Rolling Stones look like amateurs.

This was the first time that Brown, while singing “Please, Please, Please,” pulled out his “cape act,” in which, in the midst of his own self-induced hysteria, his fit of longing and desire, he drops to his knees, seemingly unable to go on any longer, at the point of collapse, or worse. His backup singers, the Flames, move near, tenderly, as if to revive him, and an offstage aide, Danny Ray, comes on, draping a cape over the great man’s shoulders. Over and over again, Brown recovers, throws off the cape, defies his near-death collapse, goes back into the song, back into the dance, this absolute abandonment to passion. Read more.

This Article is related to: News and tagged Daily Reads, Get On Up, Lucy, The Lone Ranger