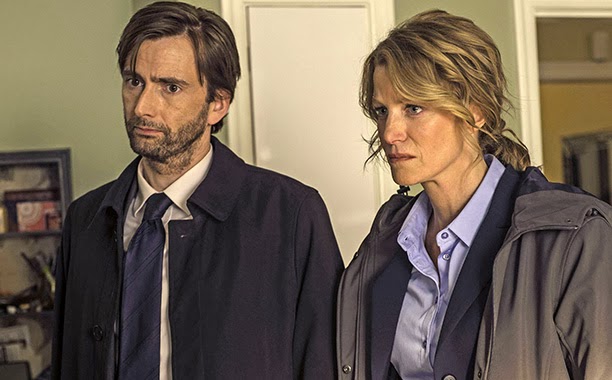 “Gracepoint,” one of Fox’s most buzzy new dramas for the Fall 2014 season, took its time on stage at the TCA tour to make a serious push for critics to appreciate the show on its own merits, despite the fact the show is a remake of the series “Broadchurch,” which was already a monster hit in Britain.

READ MORE: Would ‘Trophy Wife’ Still Exist with a Better Title, and Is ABC Making the Same Mistake This Fall?

Of course, comparisons are inevitable, given that the shows both star the same actor and track the same crime — the mysterious death of a young boy in a small seaside town. Below are some of our biggest takeaways from the panel, including what differences to expect between “Broadchurch” and “Gracepoint” as well as the wit of David Tennant.

While “Broadchurch,” the original series, did well in the UK, the season finale reaching 10.47 million viewers on ITV, its BBC America premiere was not nearly so auspicious. (To be fair, that’s comparing how a show performed on the UK equivalent of NBC with the the buzz generated by an extended cable network.)

“[BBC America]’s viewing audience for ‘Broadchurch’ represents really, truly less than one percent of the American television viewing population,” executive producer Carolyn Bernstein said. “We’re not particularly worried about the overlap. I think [executive producer Dan Futterman] can speak to the fact that we think those people who do overlap will be really into it and really enjoy the show.”

“My mom is right down the alley of the BBC America audience, and she started watching it, and she’s like, ‘I can’t understand a word they’re saying,” Futterman added.

“How rude!” was Tennant’s response.

Even if you have seen “Broadchurch,” things are going to be at least a little different.

While it was pointed out that the first episodes of “Gracepoint” make for an eerie mirror to the original, Bernstein made a point of emphasizing the show will diverge from the “Broadchurch” narrative over the course of its run.

The biggest change: 10 episodes instead of eight. “We start to veer from the storyline. And we introduced new characters, new potential suspects,” Bernstein said.

And though Futterman declined to confirm whether the killer revealed at the end of “Gracepoint”‘s first season would be different from “Braodchurch,” he did say that “We end in a very different place, which is both exciting for, first, the season and potentially exciting for what could be…a great second season as well.”

Bernstein called Tennant a “national treasure,” but the nation in question is the United Kingdom. While the actor has been a major star in his home country since 2006 (most notably thanks to his five years as The Doctor on “Doctor Who”), this is his first high-profile American role — and more importantly, the first time he’s done an American accent on this scale.

According to Bernstein, “I can say having seen all 10 episodes..that we have not had to loop a single word of David’s American accent. His American accent is absolutely impeccable.” Critics who had seen the episodes available for preview, however, were not in universal agreement.

“His American accent is absolutely impeccable,” ‘Gracepoint’s Carolyn Bernstein, instantly calling into question anything else she says.

(You can judge for yourself by watching the trailer below.)

Tennant didn’t actually meet many of his co-stars until their first scenes together.

Tennant didn’t actually meet many of his co-stars until their first scenes together.

According to Michael Pena and Virginia Kull, who play the parents of the murdered boy, Tennant was booked in a separate hotel during shooting, so that according to Tennant, “The first time we looked each other in the eye was live on camera, when I go into their house.”

Said Kull: “They called me to makeup and hair for that day, and I came out of my trailer, and David was coming out of makeup…and I was so excited that I literally ran and hid around my trailer because I knew I wasn’t allowed to meet the man.”

David Tennant and his co-stars are pretty funny.

Some random moments from the panel: