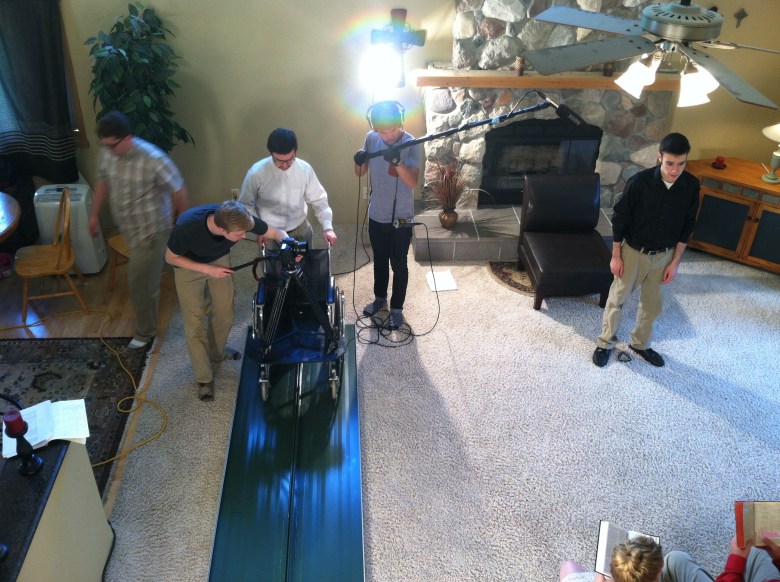 Lance Karasti is a first-time filmmaker who shot his first film, “Cult,” a dark drama that explores mental illness, sibling relationships, and youth in power, for $10,000 on a Canon 7D in his parents’ house. The crew consisted of two people (when actors
weren’t in shots, they would temporarily become crew members); below, Karasti explains how he pulled off the low-budget production, which is now available on Vimeo on Demand.

“You’re crazy,” is something I got used to hearing after telling people I was going to make a feature film for under $10,000 with a crew of two people in less than two weeks. The resulting movie, “Cult” is now completed and available but I don’t believe I proved them wrong. If you want to make a feature film at a young age (without a studio budget), you have be crazy.

Here’s what I learned from the experience:

1. Make short films with your friends.

I live in Duluth, MN, which could not be further from the Hollywood scene. Making short films with my friends allowed me to teach them the different jobs they would end up doing on “Cult” and helped me improve my own skills.

2. Write a script you care about.

Living far from the filmmaking capital of the world is actually a huge advantage as a writer. Living in Duluth helped me to find my voice and draw inspiration from people who weren’t always trying to “make it in the industry.” “Write what you know” does not mean you can only write about situations you’ve personally experienced. It means the soul of the project has to be something you feel and understand. Having a script you and your team are passionate about is the only way everyone is going to show up every day without upfront pay.

3. Write what you can shoot.

I shot “Cult” in my parent’s house using equipment and props I had acquired throughout the years. My dad does metal roofing so we ended up using metal panels as Dolly track for an old wheelchair. Your budget may be low, but planning to use what you already have can really amp up your production value.

4. A two-person crew can save you time and money.

Audio and video are the two main sides of production and I’m telling you from experience each can be done by one person. Doing all of the lighting and camera work myself actually saved time on set. I didn’t have to explain what I wanted to anyone (besides actors) so we moved as fast as I was able to. Of course, you need to be extremely prepared and storyboard everything if you want to attempt this.

Abe Diaz was the other half of the crew. He did everything sound. I trusted Abe even though he had never done production audio before. He had an ear for sound from making music. I will take someone who is passionate and willing to learn over an experienced diva any day. When we needed some extra hands for a big shot, any actors who weren’t on screen became crew.

READ MORE: Why A Small Crew Can Actually Help You Get The Shot

I didn’t have time to shoot a scene from 15 different angles so I covered most scenes with several moving master shots. This helped achieve the feel I wanted for the movie and it saved a lot of time. Again, you need to be extremely prepared for this to work. Plan everything well in advance.

I wanted my film to have a classic cinema aesthetic so my first rule was to pretend my small Canon 7D was a huge film camera. We were making a movie for large film festival screens, not a small Youtube video. The smallest mistakes will become huge on the big screen. The first thing I noticed at the festival premiere was how big close ups actually are.

7.  The first day is going to be a disaster.

We had no time to do a table read. Everyone was already stretching their work schedules for the two weeks of principal photography. Several actors had to be shuffled around a week prior to shooting because some people dropped out. The worst is going to happen. You need to be able to adapt to any situation to finish the project.

I had a scene I was unsure about so I scheduled it for the first shoot day. I figured we could work out all of our kinks on it. Of course, I didn’t tell anyone that the scene we spent an entire day on wouldn’t be in the movie, but we needed to warm up and get into a groove.

No amount of moderate behavior is going to achieve something many consider impossible. Ignore anyone who doesn’t believe you can do it. You’re not too young. You don’t need to be in Hollywood. Surround yourself with people who want to help and your passion will become their passion. You have to be committed, obsessive and audacious. When someone tells you “you’re crazy,” just say “thank you.”

Lance Karasti is a young indie filmmaker who was born and raised
in Duluth, MN. He attended film school in Hollywood and now lives in
his hometown. “Cult” is his debut feature film. It is available on Vimeo on Demand here.