Here Are All the Movies Opening Today, July 18th. What Will You See? 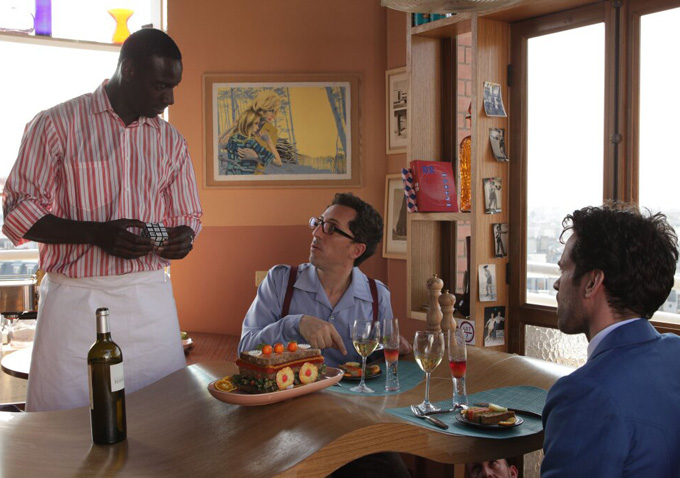 Here are the films opening theatrically in the U.S. the week of Friday, July 18th. (Synopses provided by distributor unless listed otherwise.)

Aftermath
Director: Peter Engert
Cast: Edward Furlong, Monica Keena, William Baldwin, Andre Royo, C.J. Thomason, Randal Reeder
Synopsis: “Searching for a happy ending to a tale of unimaginable disaster and horror, nine strangers find themselves holed up together in a farmhouse cellar in rural Texas. The United States has hastily become embroiled in World War 3. A young doctor named Hunter survives the nuclear attack and is thrown together by happenstance with a group of wounded and frightened victims, including Elizabeth, a strong-willed confidant to Hunter, Brad – an antagonistic redneck jackass, and Jennifer, a barely coherent young woman suffering from severe post-traumatic stress. Together, they attempt to endure the devastating holocaust as they struggle with claustrophobia and conflicting personalities. In a makeshift shelter, Hunter and his dying companions wait for news from the government while fending off hunger, radiation sickness, and a horde of frightened and dying refugees.”
Theatrical Release: Denver, Detroit, Houston, Kansas City, Los Angeles, New York, Orlando, Philadelphia and Tampa

Alive Inside: A Story of Music & Memory
Director: Michael Rossato-Bennett
Synopsis: “As dementia continues to affect millions of elderly Americans, Alive Inside: A Story of Music & Memory reveals a remarkable, music-based breakthrough that has already transformed lives. Spearheaded by social worker Dan Cohen and captured on camera over the course of three years by filmmaker Michael Rossato-Bennett, we learn that songs from a patient’s past can awaken memories and emotions that have been asleep for years, sometimes decades. Within a moment of hearing ‘I Get Around’ by the Beach Boys, Alzheimer’s patient Marylou jolts back to life, dancing around the living room and expressing a euphoria her husband hasn’t witnessed since her illness took effect. Countless instances in Alive Inside provide proof that music stimulates activity in dementia-affected parts of the brain and transforms the quality of life of those often left to languish in silence.” [Sundance Film Festival]
Criticwire Grade Average: B (4 reviews)
Theatrical Release: New York (expands to various cities across the country through August and September)

Among Ravens
Director: Russell Friedenberg, Randy Redroad
Cast: Amy Smart, Joshua Leonard, Will McCormack, Johnny Sequoyah, Natalie Imbruglia, Victoria Smurfit, Christian Campbell, Russell Friedenberg
Synopsis: “The story of a group of friends who reunite for their annual 4th of July weekend only to be confronted by Chad, a strange and beautiful nature photographer who begins to change their lives one by one.”
Theatrical Release: New York, Los Angeles, Boston, Dallas, Detroit, Tampa and Toronto

And So It Goes
Director: Rob Reiner
Cast: Michael Douglas, Diane Keaton, Frankie Valli, Yaya Alafia, Sterling Jerins, Paloma Guzmán, Andy Karl, David Aaron Baker
Synopsis: “There are a million reasons not to like realtor Oren Little (Michael Douglas), and that’s just the way he likes it. Willfully obnoxious to anyone who might cross his path, he wants nothing more than to sell one last house and retire in peace and quiet — until his estranged son suddenly drops off a granddaughter (Sterling Jerins) he never knew existed and turns his life upside-down. Clueless about how to care for a sweet, abandoned nine-year-old, he pawns her off on his determined and lovable neighbor Leah (Diane Keaton) and tries to resume his life uninterrupted. But little by little, Oren stubbornly learns to open his heart – to his family, to Leah, and to life itself.”
Theatrical Release: Wide

A Five Star Life
Director: Maria Sole Tognazzi
Cast: Margherita Buy, Stefano Accorsi, Fabrizia Sacchi, Gianmarco Tognazzi, Alessia Barela, Lesley Manville
Synopsis: “Single and middle-aged, beautiful Irene (Margarita Buy) is wholly devoted to her job as an inspector of luxury hotels. Constantly on the road, she indulges in expensive pleasures at impeccable resorts, but always incognito and alone, soon escaping to the next exotic destination with her checklist and laptop in tow. When her best friend and ex Andrea (Stefano Accorsi), who has always been a source of emotional support, suddenly becomes unavailable, Irene is thrown into a deep existential crisis. ‘Luxury is a form of deceit,’ she is told by a fellow traveller in the fog of a steam room, and thus begins Irene’s quest to bring more meaning into her life.”
Theatrical Release: New York (opens in eight other states and Washington, DC throughout August)

I Origins
Director: Mike Cahill
Cast: Michael Pitt, Brit Marling, Steven Yeun, Archie Panjabi, Cara Seymour, Astrid Bergès-Frisbey
Synopsis: “Dr. Ian Gray (Michael Pitt) is a molecular biologist studying the evolution of the eye. He finds his work permeating his life after a brief encounter with an exotic young woman (Astrid Bergès-Frisbey) who slips away from him. As his research continues years later with his lab partner Karen (Brit Marling), they make a stunning scientific discovery that has far reaching implications and complicates both his scientific and spiritual beliefs. Traveling half way around the world, he risks everything he has ever known to validate his theory.”
Criticwire Grade Average: B (18 reviews)
Theatrical Release: New York and Los Angeles (expands across the country July 25th)

K: Missing Kings
Director: Shingo Suzuki
Cast: Daisuke Namikawa, Daisuke Ono, Tomokazu Sugita
Synopsis: “The ‘Academy Island Incident’ in which four ‘kings’ cross paths… Since then, Silver Clansmen Kuroh Yatogami and Neko have been searching for their master, Shiro. Without finding any clues to Shiro’s whereabouts, the two became disheartened. However, one day, they see HOMRA members Rikio Kamamoto and Anna Kushina being chased by someone.”
Theatrical Release: Various (including Greensboro, Los Angeles and Tempe)

Mood Indigo
Director: Michel Gondry
Cast: Audrey Tautou, Romain Duris, Omar Sy, Gad Elmaleh, Alain Chabat, Tilly Scott Pedersen, Aissa Maiga, Charlotte Lebon, Sacha Bourdo, Philippe Torreton, Vincent Rottiers, Laurent Lafitte, Natacha Régnier, Zinedine Soualem, Marina Rozenman, Wilfred Benaïche
Synopsis: “Based on the novel by Boris Vian, Mood Indigo sees French writer-director Michel Gondry returning to his wild, imaginative, and romantic roots. Colin (Romain Duris) is living a colorful life in Paris—he’s wealthy, he enjoys the company and comfort of his offbeat friends (Omar Sy, Gad Elmaleh), and is excited about his latest invention, the pianocktail (a piano that produces quality cocktails). One day, one of Colin’s friends admits that he’s fallen head-over-heels in love with an American woman. Envious and suddenly anxious out of loneliness, Colin wants the same. At a party, he meets the elegant Chloe (Audrey Tautou) and the two tumble into a whirlwind of jazz-dancing, ice-skating, city-sweeping romance. They fall in love and get married, but are suddenly confronted with the news of Chloe’s strange illness—she’s begun to grow a flower inside her lungs. As Chloe’s health deteriorates, so does her relationship with Colin.” [Seattle International Film Festival]
Criticwire Grade Average: B (14 reviews)
Theatrical Release: New York and Los Angeles (expands to various cities through August)

Persecuted
Director: Daniel Lusko
Cast: James Remar, Bruce Davison, Dean Stockwell, Fred Thompson, Brad Stine, Natalie Grant
Synopsis: “Nationally acclaimed evangelist John Luther is the last obstacle in the way of sweeping religious reform in the States. When a U.S. Senator and Luther’s own supporters abduct and frame him in the murder of an innocent teenage girl, an unprecedented era of persecution is unleashed. Out on personal recognizance, Luther escapes police surveillance in search of the truth. And suddenly, a once-normal life is targeted by a team of ex-military operatives who wage a relentless campaign to eliminate the incriminating evidence. As evangelist turned fugitive, Luther vows to expose anyone involved with or profiting from the girl’s murder; a mission that brings him face-to-face with the coming storm of persecution that will threaten the entire Christian community in America.”
Theatrical Release: Wide

Sex Tape
Director: Jake Kasdan
Cast: Cameron Diaz, Jason Segel, Rob Lowe, Ellie Kemper, Rob Corddry, Jack Black, Jolene Blalock, Randall Park, Timothy Brennen, Giselle Eisenberg, Brendan Egan, Kate Jurdi, Krisztina Koltai, Osmani Rodriguez, James Wilcox
Synopsis: “When Jay (Jason Segel) and Annie (Cameron Diaz) first got together, their romantic connection was intense – but ten years and two kids later, the flame of their love needs a spark. To kick things up a notch, they decide – why not? – to make a video of themselves trying out every position in The Joy of Sex in one marathon three-hour session. It seems like a great idea – until they discover that their most private video is no longer private. With their reputations on the line, they know they’re just one click away from being laid bare to the world… but as their race to reclaim their video leads to a night they’ll never forget, they’ll find that their video will expose even more than they bargained for.”
Criticwire Grade Average: C (9 reviews)
Theatrical Release: Wide

Video Games: The Movie
Director: Jeremy Snead
Synopsis: “An epic feature length documentary chronicling the meteoric rise of video games from nerd niche to multi-billion dollar industry. Featuring in-depth interviews with the godfathers who started it all, the icons of game design, and the geek gurus who are leading us into the future, VIDEO GAMES: THE MOVIE is a celebration of gaming from Atari to Xbox, and an eye-opening look at what lies ahead.”
Theatrical Release: Various (including Atlanta, Dallas, Miami, New Orleans, New York, Phoenix, San Diego, San Jose, Toronto and Vancouver)

Wish I Was Here
Director: Zach Braff
Cast: Zach Braff, Donald Faison, Joey King, Kate Hudson, Mandy Patinkin, Ashley Greene, Jim Parsons, Josh Gad
Synopsis: “Following his celebrated debut feature, Garden State, Zach Braff delivers a new postcard from the edge of existential crisis, this time playing a thirtysomething family man wrestling with a few minor hindrances—like his disapproving father, an elusive God, and yes, adult responsibility. Aidan Bloom is a pot-smoking actor whose last job, a dandruff commercial, was longer ago than he cares to admit. Pursuing his thespian dream has landed him and his wife in tough financial straits, so when his grumpy father can no longer pay for the kids to attend Jewish Yeshiva, Aidan opts for homeschooling. To the chagrin of his hyperdisciplined, religious daughter and the delight of his less-than-studious son, Aidan takes matters into his own imaginative hands, rather than sticking to the boring old traditional curriculum.” [Sundance Film Festival]
Criticwire Grade Average: C+ (12 reviews)
Theatrical Release: Wide

Missed last week’s? Here are all the releases from the weekend of July 11th.

This Article is related to: Features and tagged Alive Inside: A Story of Music & Memory, And So It Goes, I Origins, Mood Indigo, Planes: Fire & Rescue, Sex Tape, The Purge: Anarchy, Trailers, Weekly Film Guide, Wish I Was Here