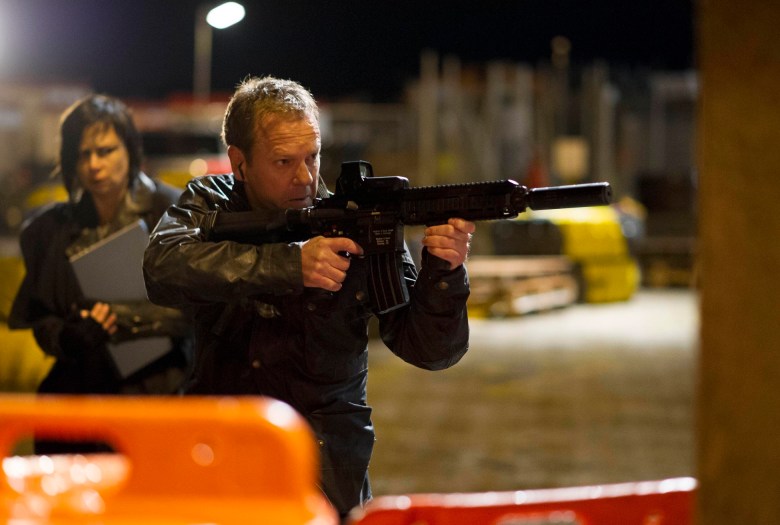 In all the hubbub surrounding this past season’s return of “24” (as “24: Live Another Day”), it could be easy to lose sight of the show’s impact on the landscape of television: It was one of the first dramas to push TV into its so-called “golden age,” with a variety of high concept ideas outside of its basic premise (real time viewing). Kiefer Sutherland stopped by Comic Con — to a packed ballroom of 4,500 fans — to discuss the (possible) end of the iconic FOX series. Here are the highlights:

Though there wasn’t a lot of buzz surrounding the possibility of extending the series further, one fan did ask if producer Jon Cassar, who moderated the panel, would be interested in directing the film if it does come about.

“It’s hard to talk about that,” Cassar said, stating the movie and TV production worlds are still very different. But he did confirm the possibility of a film still exists. “We’re still talking about the movie. It’s still potentially out there.”

Why Jack got mean for “Live Another Day”:

Early on in the discussion between Sutherland and Cassar, the actor discussed the necessary change involved in bringing Jack back for another season so long after the last one.

“This was a meaner Jack,” Cassar said.

Sutherland agreed, later discussing how the essence of his character was based on loss. His wife died and daughter abandoned him, among many more losses on the show. “[That] allowed us to get to Season 9 when he has nothing. He’s just angry,” Sutherland said.

Kiefer Sutherland is not Jack Bauer, though he did try to save an old lady once.

When asked if the line between Kiefer and Jack ever started to blur during shooting, Sutherland was quick to deny any close connection between the actor and his character.

Still, life has a tendency to imitate art, as Sutherland found out in an “embarrassing” attempt at Bauer-esque heroism. While living in Los Angeles, Sutherland witnessed an old lady crossing the street carrying a bag of groceries. As he was watching from his car, the woman was accosted by two youths. Sutherland jumped into action — just as Jack would, but with different results.

“I jumped out of the car and I hit one of them,” Sutherland said. “Then I turned to the other and he was like, ‘no, no, no!’ Turns out, they were shooting a student film.”

Sutherland was “quite happy” to throw “The Red Queen” out a window.

While the topic of Season 9 came up often (Sutherland said at one point, “All of us didn’t want to let it go”), one repeated topic was when Jack threw a nemesis out of a window. First, the duo discussed how difficult it was to use guns while shooting in London, where the clearance process for using firearms was more complicated than in the U.S. Later, though, Sutherland admitted “it was my ego” that lead to him throwing actress Michelle Fairly — referred to only as her “Game of Thrones” character name “The Red Queen” during the panel — out of a glass window.

“As written, I came through the window and shot her,” Sutherland said, before explaining how he convinced the producers to let him act in the scene with her. “In the end, it was my ego. […] They added three lines, [and] I asked if I could throw her out the window. They said, ‘Great, great.’ [But] she’s the strongest short person ever. So by the time I actually chucked her out the window, I was quite happy.”

Sutherland tried to convince other actors to start working in television before it was cool.

Sutherland, when reminiscing about the beginning of “24,” discussed the stigma attached to TV when he first started. “I was trained, certainly in the early ’80s, [that] television, that was the end of your career. The next thing was commercials and then you were dead,” he said. “And the fear of television was playing a character over a long period of time. But ’24’ was part of it, I think ‘ER’…’Sopranos’ was a perfect example. The character was vastly different [from beginning to end]. I think Jack Bauer was the same. So I tried to explain it to other actors. ‘You’ve got to try this. This is amazing. You get to develop a character over X number of years, and the character doesn’t stay the same.

“It’s one of the greatest and most rewarding acting experiences I’ve ever had,” he said. “My experience in television was extraordinary for that. It was just an honor to be a part of that transition.”