Review: 'Guardians of the Galaxy' is Spectacular and Fun, But Rarely at the Same Time 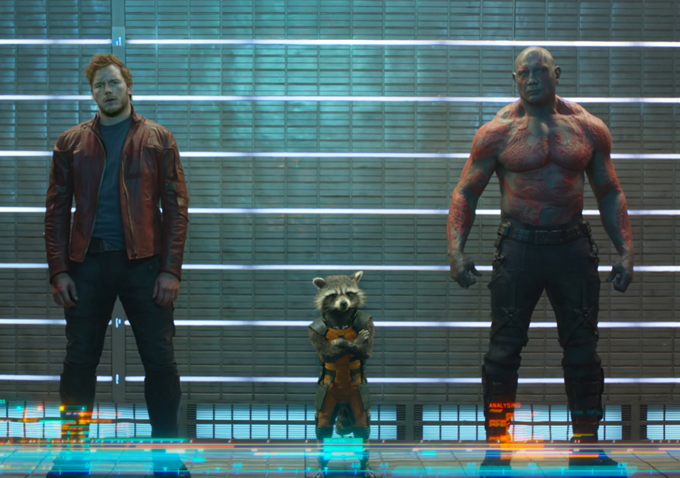 “Guardians of the Galaxy” is a smart, funny movie at war with dumb explosions and other special effects. It also celebrates them.

The genius commercial gamble of Marvel’s recent superhero movies is that, even though the stories all take place in the same universe, the studio has hired writer-directors with distinctive sensibilities to work within those constraints. Jon Favreau’s penchant for crafting slick male anti-heroes helped give “Iron Man” its initial luster; super-fan Joss Whedon nimbly pulled together all the strands of earlier movies for “The Avengers,” giving the superhero banter a credible human dimension in spite of its absurdities.

“Guardians of the Galaxy” — which takes place in far-off star systems and mainly involves goofy aliens — confronts these absurdities head-on, which makes former Troma films disciple and B-movie junkie James Gunn the ideal choice for shepherding this project to fruition. He delivers well enough: Though the special effects win the day, “Guardians of the Galaxy” holds court with a sense of humor that transcends its more familiar ingredients. 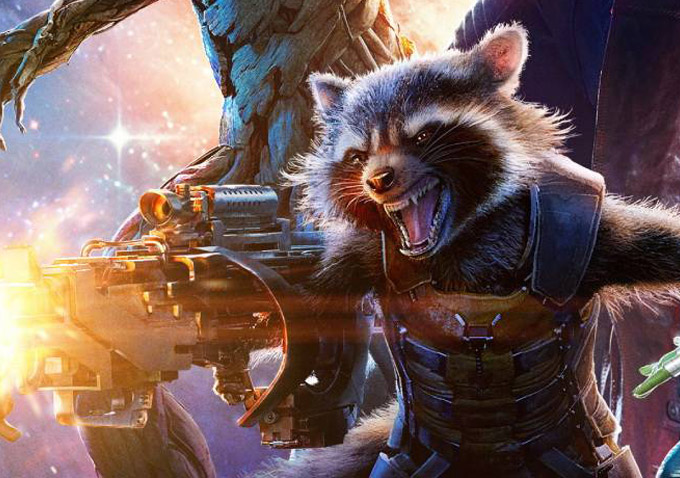 But make no mistake — there are constraints to this type of mass market filmmaking, and for all the entertaining asides that “Guardians of the Galaxy” offers up, it’s hardly an adventurous piece of storytelling. As proven by the recent dust-up with Edgar Wright’s script for “Ant-Man,” which the studio allegedly rejected because Wright only makes movies on his terms, there’s always an element of compromise in play with movies made on this scale.

To that end, Gunn also fits the project. “Guardians of the Galaxy” channels the expert awareness of genre traditions found in his earlier work while using the bigger scale to polish them. His two previous movies set the stage. The amusingly over-the-top alien invasion story “Slither” proved his ability to embrace both sides of the horror-comedy formula at once. With “Super,” in which a deranged Rainn Wilson donned tights and made a series of misguided attempts to become a vigilante, Gunn brought a mischievous sensibility to the superhero arena without actually critiquing it. “Guardians of the Galaxy” consolidates those tendencies. At the same time, it sublimates them into a bigger picture that dwarfs its better components.

Fortunately, the movie overcomes the limitations of its effects-driven narrative due to a series of well-honed performances. Chief among them is Chris Pratt as the story’s sole Earthling, Peter Quill, who’s kidnapped by rogue aliens as a child and grows up to be a roving interplanetary bandit. 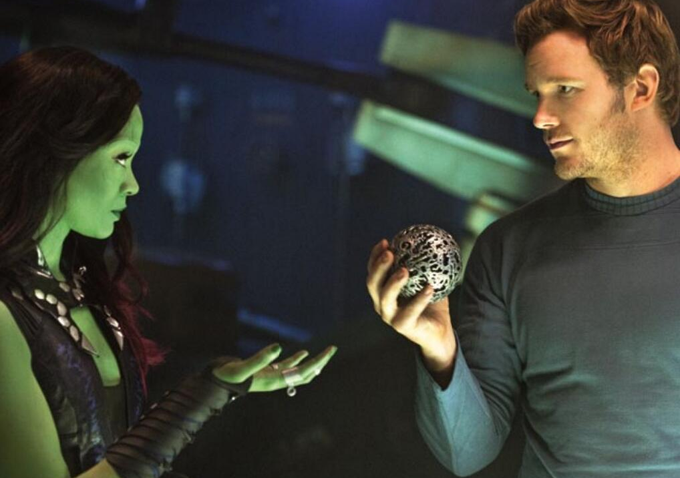 During one of his outings, he comes across a powerful orb with the ability to destroy the universe. Mainly, this McGuffin puts a series of plot devices into play: Orphan assassin Gamora (Zoe Saldana) is sent to track down Quill and get back the orb. Meanwhile, the alien pirate Yondu (an enjoyably gruff Michael Rooker) puts a bounty on Quill, leading to the introduction of the movie’s real stars, both fully animated: Cocky loudmouth bounty hunter Rocket Raccoon (Bradley Cooper) and his lumbering sidekick, a walking tree named Groot (a digitized Vin Diesel, who only says variations on the phrase “I am Groot” innumerable times over the course of his screen time).

Eventually, Quill winds up behind bars with the bounty hunters, and they hesitantly join forces to break free, joined by the hilarious literal-minded meathead Drax (Dave Bautista). The rest of the movie involves their efforts to evade the power-hungry radical Ronan (Lee Pace) from getting his hands on the orb, and eventually the group transforms from self-interested hustlers to a duty-bound saviors. If that’s a spoiler, well, what did you expect?

But the journey to that obvious destination includes freewheeling exchanges and comical asides that wouldn’t seem out of place in a Robert Altman movie. “Guardians of the Galaxy” is at its best when it’s about everything you don’t expect it to be about: the characters.

Pratt, who has proven himself a chameleonesque actor difficult to pin down, makes perfect sense for this goal. He capably assumes the archetype of an action hero even while complicating his swagger with a klutzy maneuvers and a self-aware smirk. However, Rocket and Groot hog the spotlight with such charisma that Marvel shouldn’t rule out the prospects of a spin-off. Echoing a Han-and-Chewbacca-like chemistry, the pair’s smarmy, reckless approach to getting the job done marks one of the best buddy comedy pairings in some time, providing one more example of the rich possibilities afforded by the ability to craft CGI protagonists.

Unfortunately, Gunn’s script isn’t as keen on the women. Saldana mainly plays it straight under layers of green makeup, and when Pratt must rescue her from the clutches of deep space — the 21st century equivalent of untying the damsel in distress from the train tracks — she devolves into a bland support system for his duress. But when the script calls for her to deliver a good beating or hurl epithets at the crass men around her, she delivers, and that’s enough to give the actress room to play around.

And she certainly has plenty of space. Rocket and Groot aren’t the only hints of a “Star Wars” vibe on display. With every shot processed and textured to play up its otherworldly ingredients, “Guardians of the Galaxy” takes place in a fully realized virtual world. When Benicio del Toro shows up for one prolonged scene as a scheming hoarder known as The Collector, it’s just another excuse to showcase a roomful of cosmic things, living and not, that he has gathered from across the galaxy. As every shot impresses on us, it’s an unfathomably giant universe out there.

Given that scale, the most exciting moments in “Guardians of the Galaxy” don’t involve its plot. When the pirate Yondu whistles to coax an arrow out of his belt and take down an entire army, you get the sense that the scene could take place at any point in the movie. The entertainment value is splattered all over the place.

But Gunn still manages to have fun with one overarching ordering device: a mixtape made for Quill during his childhood by his mother before she died of cancer. The hero hauls this analog evidence of his past along with him through his digitized adventure as if grasping for the roots of a story that extends beyond its slick exteriors.

As a result, “Guardians of the Galaxy” benefits greatly from its pop-heavy soundtrack, which includes The Five Stairsteps’ “O-o-h Child” being used to distract a villain and “Cherry Bomb” to enliven a montage as the team explains their plan to win the day. (There’s even an entire monologue involving a song from “Footloose.”) Gunn compliments this stylish device with sensational images of his stars, including one slo-mo walk down the hallway that echoes the opening of “American Hustle.” The device works: With musical rhythms heightening the mood, Gunn guides the superhero fantasy into rock star territory.

In doing so, Gunn efficiently turns his pop culture subject into a giddy playing field. Just like when “Iron Man” runs his mouth, the heavy focus on style allows these silly narratives to gather as much of their value from an ebullient tone as they do from their costly production budgets.

But it’s still the effects that dominate. When the “Guardians” engage in large scale combat, particularly during the explosive (and explosively dull) giant spaceship-set battle in the final half hour, the whole enterprise sags, only regaining some ground when the banter returns. Yet the entire picture amounts to one grand special effect, even as Gunn colors in the margins. Its best characters don’t show even the slightest evidence of human flesh, but their appeal has little to do with the technology that brings them to life.

If “Guardians of the Galaxy” dropped its actual high stakes plot (that is, saving the universe from imminent destruction), it would still amount to a pretty enjoyable movie. Its highlights, which mainly involve the irascible Rocket, prove as much: Ever the troublemaker, he repeatedly throws fake ingredients into his plans (like the need to steal a prisoner’s fake leg) just to mess with people. At one point, he gets into a drunken brawl and threatens to blow an entire bar to shreds. There’s a genuine thrill to watching these raggedy moments — rather than distracting you with effects, they apply the effects to more satisfying exchanges, and it’s here that the movie provides a window into a better kind of blockbuster.

This summer has been especially potent with possibilities in that regard. While the latest “Transformers” provided the dullest option, “Dawn of the Planet of the Apes” offered a far more mature form of tentpole filmmaking. Luc Besson’s “Lucy,” opening this week, flies off the rails with all kinds of inventive ideas even as it clumsily barrels ahead. “Guardians of the Galaxy” falls somewhere in the middle of that spectrum. It’s just dumb enough to please complaisant viewers, but finds inspiration in a sarcastic attitude that transcends its factory-mandated conventions. By closing — as all these movies must — with the promise of further installments, “Guardians of the Galaxy” keeps open the likelihood that even as the familiar story will continue, it may continue to surprise us in other ways. One can only hope.

“Guardians of the Galaxy” opens nationwide on August 1.

This Article is related to: Reviews and tagged Chris Pratt, Guardians of the Galaxy, James Gunn, Reviews