FXX Airs 'The Simpsons' in Wrong Aspect Ratio. Won't Someone Think of the Children? FXX’s marathon of every episode of “The Simpsons” is underway, and it’s still early into the show’s best seasons. But hardcore fans of the series have noticed something off about the early seasons: they’re in the wrong aspect ratio. Instead of running the episodes in their original 4:3 standard definition format, frames have been cropped, zoomed in and stretched to fit 16:9, or the current format for HDTV, complete with heavy digital noise reduction to make it look cleaner (not always a good thing, and certainly not here). At its most benign, it looks slightly off. At its worst in previous cropped versions, it makes some of the more meticulously composed images look like this: 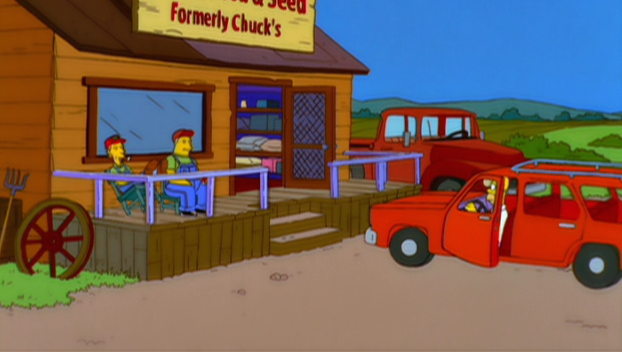 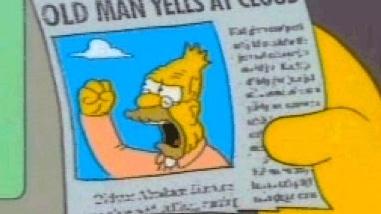 Not only is it unsightly, but the cropping renders some of the show’s trademark freeze-frame gags unintelligible: “Formerly Chuck’s” isn’t real funny without “Sneed’s Feed & Seed” before it.

Liz Miller, who live-blogged the first day of “The Simpsons” for Indiewire, has a few other examples here.

On top of that, while this marathon is running only the original cuts of the episodes, future airings on FXX will be the shorter, syndicated versions, which have cut jokes so as to fit in more ads. The uncut episodes will be available in 4:3 on the “Simpsons World” app, but those looking to tune in to the episodes they saw when they originally aired will be mighty disappointed. FXX says they plan to break out the originals only for special occasions (and presumably still in 16:9).

Not to sound ungrateful for something that’s brought the best of “The Simpsons” back to everyone’s attention again, but doesn’t this violate the spirit of the whole idea of airing the series uncut? The show didn’t switch to 16:9 until 2009, about a third of the way into season 20, so that’s the bulk of the series that’ll suffer. A number of “The Simpsons” fans on social media are annoyed, with some comparing it (rightfully) to pan-and-scan for widescreen films back in the days of VHS.

Still, some fans and writers haven’t totally given up on the marathon. Trying to make the best of the situation, A.V. Club contributor Vikram Murthi wrote, “I’m not saying it’s ideal, but jeez, it’s still ‘The Simpsons.’ They’re also unedited cuts. C’mon.” And plenty of other “Simpsons” die-hard fans are tuning in, so even if it’s bothering people, it’s not totally killing the show.

But the reason people were so excited for FXX’s marathon was for the return of the show’s best years, a reminder of why the show mattered and why, even as it goes on long after it should have ended, it has a place in so many hearts. “The Simpsons” shaped the sense of humor of a couple of generations, and it remains a major cultural touchstone in television history. As with any film or TV show, it should be preserved as its creators intended. If the marathon and all subsequent runs of “The Simpsons” are worth doing, they’re worth doing right. In conclusion:

This Article is related to: News and tagged FX Networks