'Hannibal' and 'Louie': David Lynch and Dreaming Through Life in 2014's Best Television 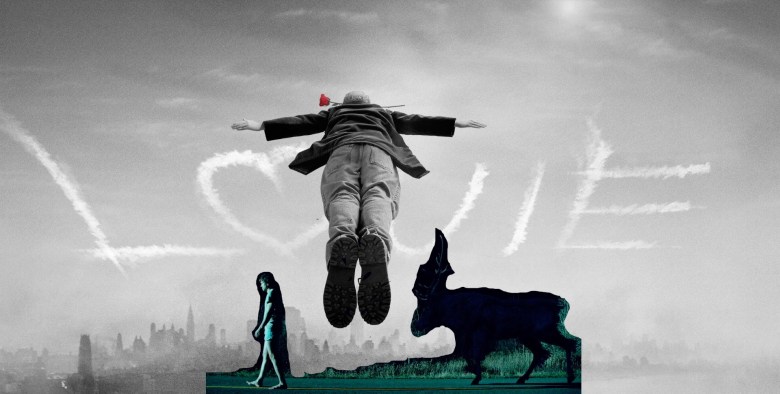 The mark of David
Lynch’s surrealist “Twin Peaks” links the seemingly different “Louie” and “Hannibal,” thus far 2014’s most captivating series. Challenging viewers to
think beyond the usual parameters of television programming, each show is steeped
in dreams and yet irrevocably tethered to the anxieties and desires of waking
life. The oneiric images conjured by their protagonists’ active imaginations
are not only used to further plot points but also show how the comedian Louie
(Louis C.K. playing his alter-ego) and the FBI profiler Will Graham (Hugh
Dancy) invoke dream logic to better comprehend themselves and the people around
them.

Both series’ dream-like
manipulation of time enriches the storytelling, each mapping out nonlinear, spatially aberrant landscapes. “Louie” episodes are often
unburdened by what came before or will come after, creating an apparent
disconnection among plots and characters and thus demanding active viewer engagement to discover more hidden associations. Its flashback episode (“In the Woods”) is as detailed and realistic as the rest of the season yet still retains a feeling of the memorial — a stage of Louie’s life that has been made suddenly more vivid by its present relevance.

Meanwhile, “Hannibal” characters move
between spaces in strange, physically impossible ways; the first season finale
is a mind game of lost time and instantaneous trips between cities, constructing
a puzzle not to be solved without revisiting the past via memory. 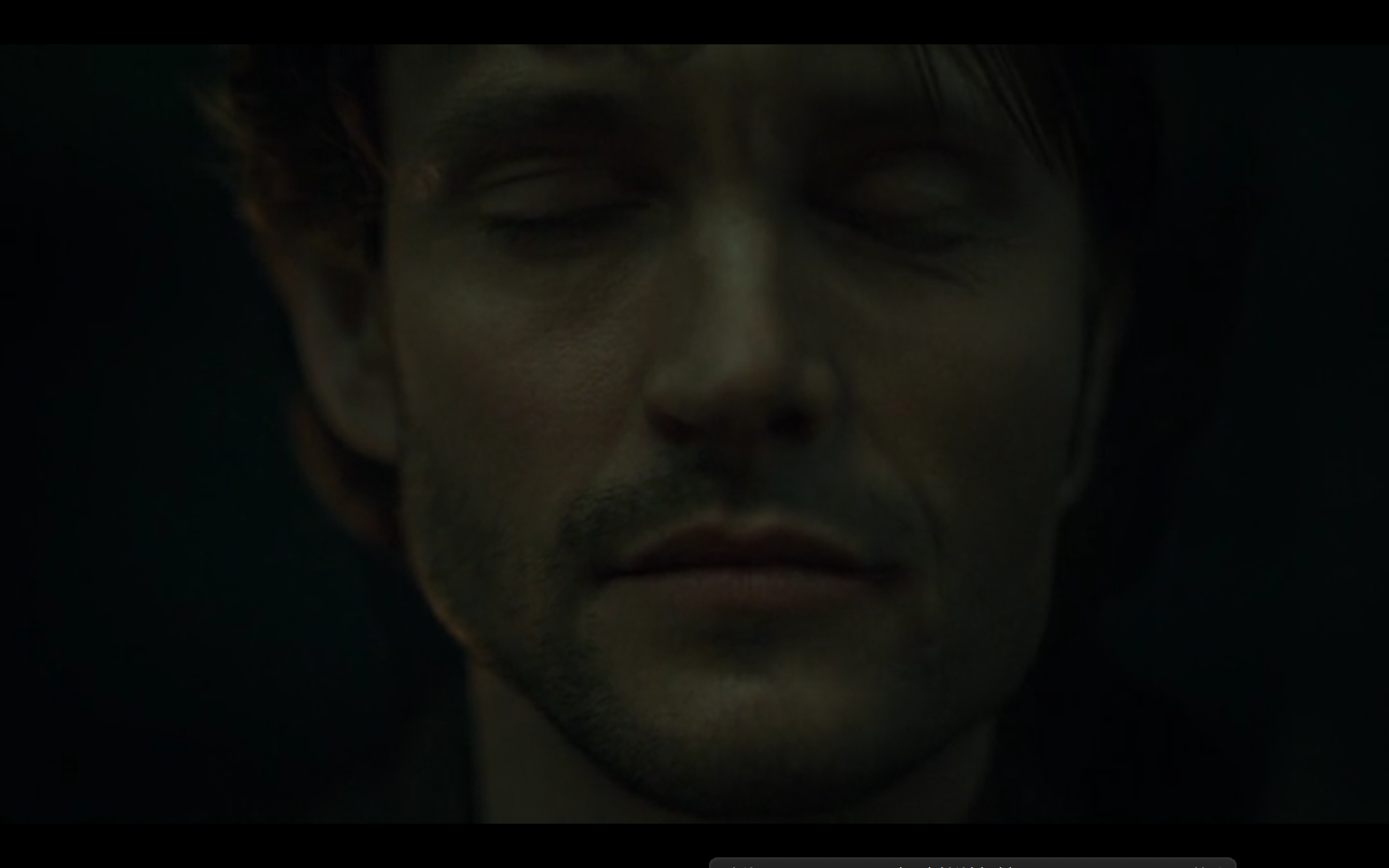 This spatial and temporal freedom is inherited from the Lynchian cinematic universe, suggesting characters that are fluid, non-static
and eccentric. Will and Hannibal understand each other through recognizing the
truth of their respective and interchangeable masks and, in one scene, morph
into each other (not unlike Bergman’s “Persona”).

Also, while Hannibal’s dining room unfolds as a
stage upon which the characters perform for one another (to both deceive and reach
mutual comprehension), Louie often highlights the constant performative aspects
of his life — as a comedian who presents himself on stage or as cumbersomely
stepping into the alien roles of father and husband.

In one scene, he performs
(and auditions) for David Lynch himself (in a multi-episode guest-starring
spot), in front of the velvet curtains typical of Lynch’s work (as well as that
of his predecessor, Buñuel). As such, these series explore how dreams structure
our lives as films, reduced in scope yet limitless in possibility.

Fantastic
imagery is not a mere interlude interrupting otherwise “realistic” frames;
instead, the border between “real” and “fantasy” is nearly nonexistent,
instilling an illuminating, surrealist order. Will’s hallucinations of the stag; a demonic,
black-horned Hannibal; or the ubiquitous ghost of Garrett Jacob Hobbs blend
into the already stark, highly saturated backgrounds. His imagination infuses
the canvas with violent, though often serene, images that establish an
intriguing continuity between illusion and fact. (To aid him in constructing
these striking visuals, “Hannibal” creator Bryan Fuller has called on regular “Twin Peaks” director Tim Hunter to direct episodes.) 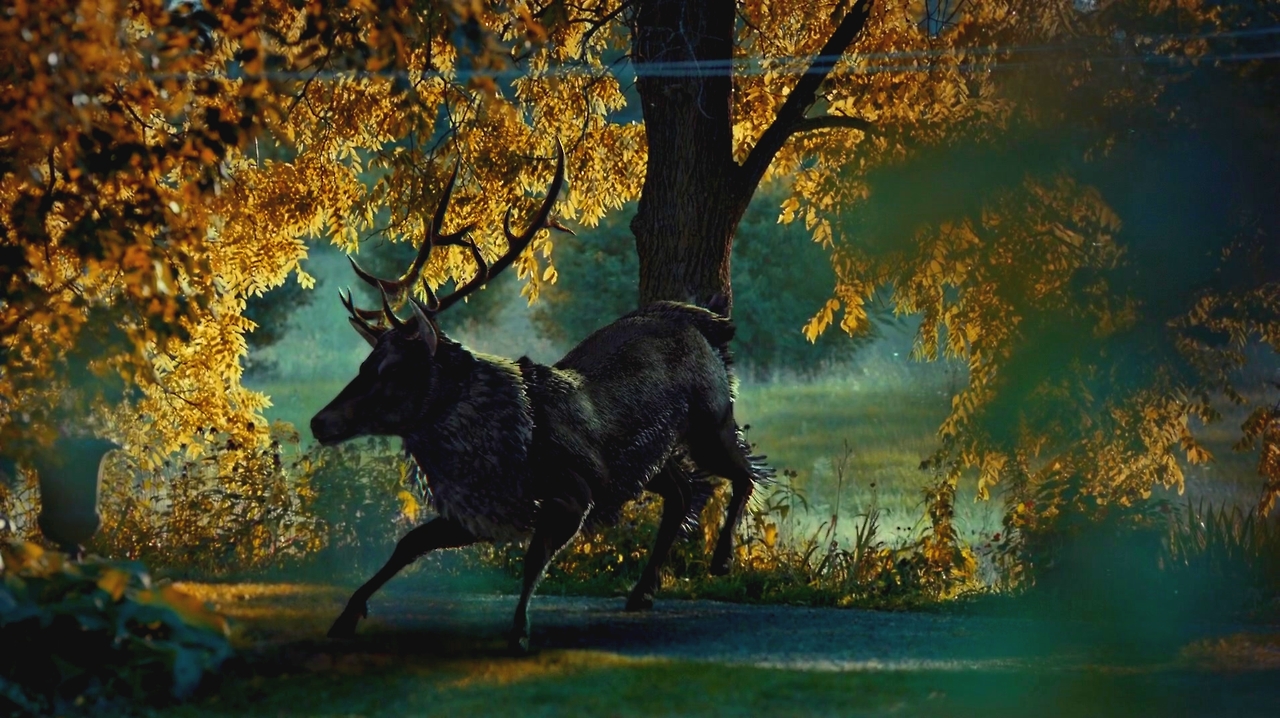 “Louie,” meanwhile, exaggerates the absurd via the surreal for comedic effect. In the
pilot, a helicopter suddenly appears during a disastrous date to rescue a woman
from Louie’s unwanted romantic advances. In the latest season alone there are countless
examples: During a frustrating meeting, Louie suddenly screams out the window, unnoticed
by the others. Suffering a hangover, he makes his way through a crowded coffee
shop, with the clientele’s conversations and physical encroachments exaggerated
to show his half-asleep, miserably over-sensitive state. In yet another example, he awakes to the sound of
drilling to then have the construction enter his very bedroom and the workers
pile up with him, viscerally evoking the constant disturbances of living in
Manhattan.

In “Elevator
Part One,” Louie’s increasingly anxious and emotionally unstable daughter Jane
awakes from a nightmare and, rather than go back to sleep, chooses to carry out
her waking day as if she were still dreaming. Out of curiosity and fear, she
steps onto the subway platform while Louie stands panicked, stuck on the train after
the doors have closed. When Louie finds her, he is enraged, telling her that she is awake and could have been killed, that she should not escape into a fantasy. Yet Louie is speaking
to himself as well, well aware of his own proclivity for fictionalizing his life, not
only due to the autobiographical nature of the series but also his consistent
skirting of the line between reality and imagination.

While
acknowledging the dangerous terrains they maneuver, these series embrace the truth
of fiction as an elevated way to face fears without the debilitating shock of
their direct confrontation.

Though their
otherworldly imaginings may often isolate them or weaken their control over
reality, Will and Louie are marked by a particular ability to think beyond
conventional reason and embrace fantasy to face real-life problems. Following
in the footsteps of “Twin Peaks” protagonist Agent Dale Cooper, whose Black Lodge is a dream place
offering revelatory secrets, each of these men is attuned to how dreams may function in
both sleep and waking states, giving shape to what may otherwise remain dangerously hidden. 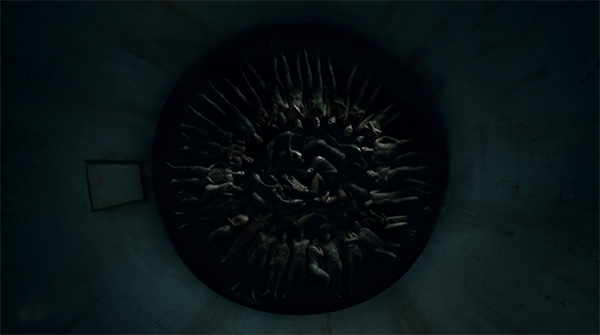 The “Hannibal” killers create crime
scenes of aesthetic precision and elegance by taking their horrific fantasies
and materializing them out of human flesh (turning human bodies into praying
angels, string instruments, beehives, mushroom gardens, or the “eye of god”).
Will closes his eyes and uses the memory of his highly detailed perception of
the scene to deconstruct its “design” and trace the identity of the killer. This forces him into the mental and
physical space of the killer — not a real space but rather one Will creates
with the super-logic of his imagination. Continuing in the tradition of
artistic depictions of violence through dream-like imagery (Caravaggio,
Gericault, Bacon, Kahlo), the aestheticization of the horrific becomes a way to
gain approximation without revulsion. However, paralleling the spectatorial experience,
Will struggles to maintain distance despite his intellectual fascination.

Looming over “Hannibal” is Dale Cooper’s fate in “Twin Peaks”: Overtaken
by the villain BOB, who inhabits the bodies of men and, exploiting their buried
sexual and violent desires, commits otherworldly crimes against young women. Will’s
ability to transform himself figuratively into a serial killer exposes him to becoming
one, which is precisely Hannibal’s objective. His presence in Will’s dreams,
even as the object of his wrath, is welcomed evidence of the destructive
impulse within him.

Dreams invite
both freedom and vulnerability. When Will is imprisoned, he is able to abandon
his cell for the still-constrained spaces of his mind and often finds himself fly
fishing in a quiet river. 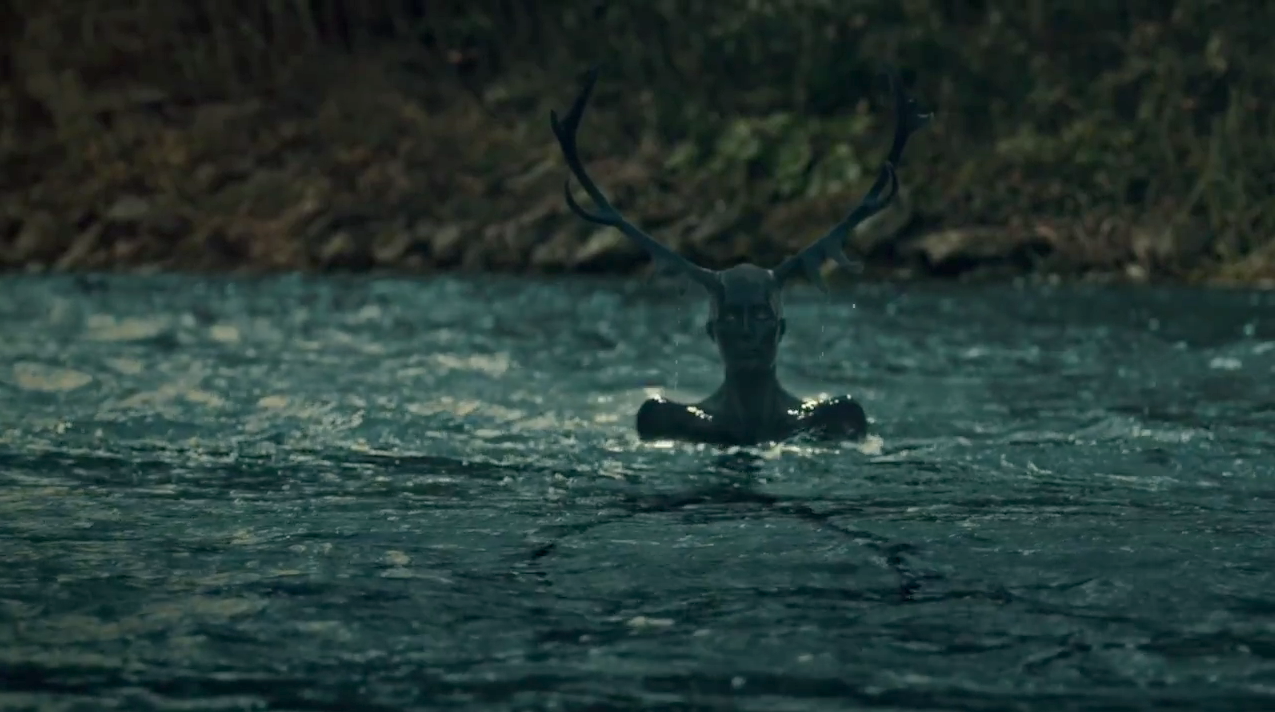 This single, seemingly banal experience is a
repeating, unifying force that grounds Will in a childhood memory. However, as the Black
Lodge ultimately exposed Dale to BOB, the river is subject to invasion by flowing
corpses and Hannibal himself, who emerges from its waters in his demonic form. The
fluidity that is his strength is also his weakness, and Will frequently dreams of flooding as a sign of his lack of mental stability and increasing
self-doubt.

Fire has been a present force in the work of Lynch, as it is
in “Hannibal,” from the dream of the burning stag to Hannibal’s
always-burning fireplace. Yet, the subtitle to “Twin Peaks” and the
name of its prequel film “Fire Walk with Me” is taken from a biblical
verse in which water is also a key element.

“Louie” also utilizes water as a kind of ambiguous fluid portal between the real and
imaginary. The “Elevator” episodes of season four feature recurring
news reports of a massive storm killing scores of people (but, most
importantly, LeBron James); at the climax, the storm finally reaches Louie’s
world, and he has to save his daughters and wife from the flood. 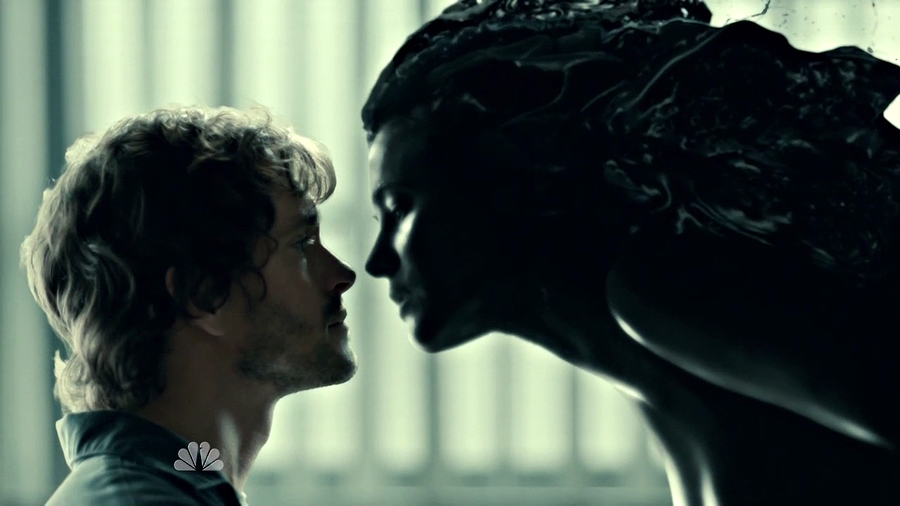 In one instance, Alana turns into a watery substance as she attempts to draw out Will’s memories (of Hannibal). In “Louie”‘s “Model,” an attractive, freewheeling admirer
seduces Louie by stripping to her underwear and diving into the ocean (another water source) in the
near pitch black of the night. Despite his clear
bewilderment and fear, he is aroused and follows her. This reaches its climax when her simultaneously
aggressive and stimulating tickling leads to an accidental act of violence — kicking off the
rest of the season, which explores Louis’s conflictive, often unstable relationships. 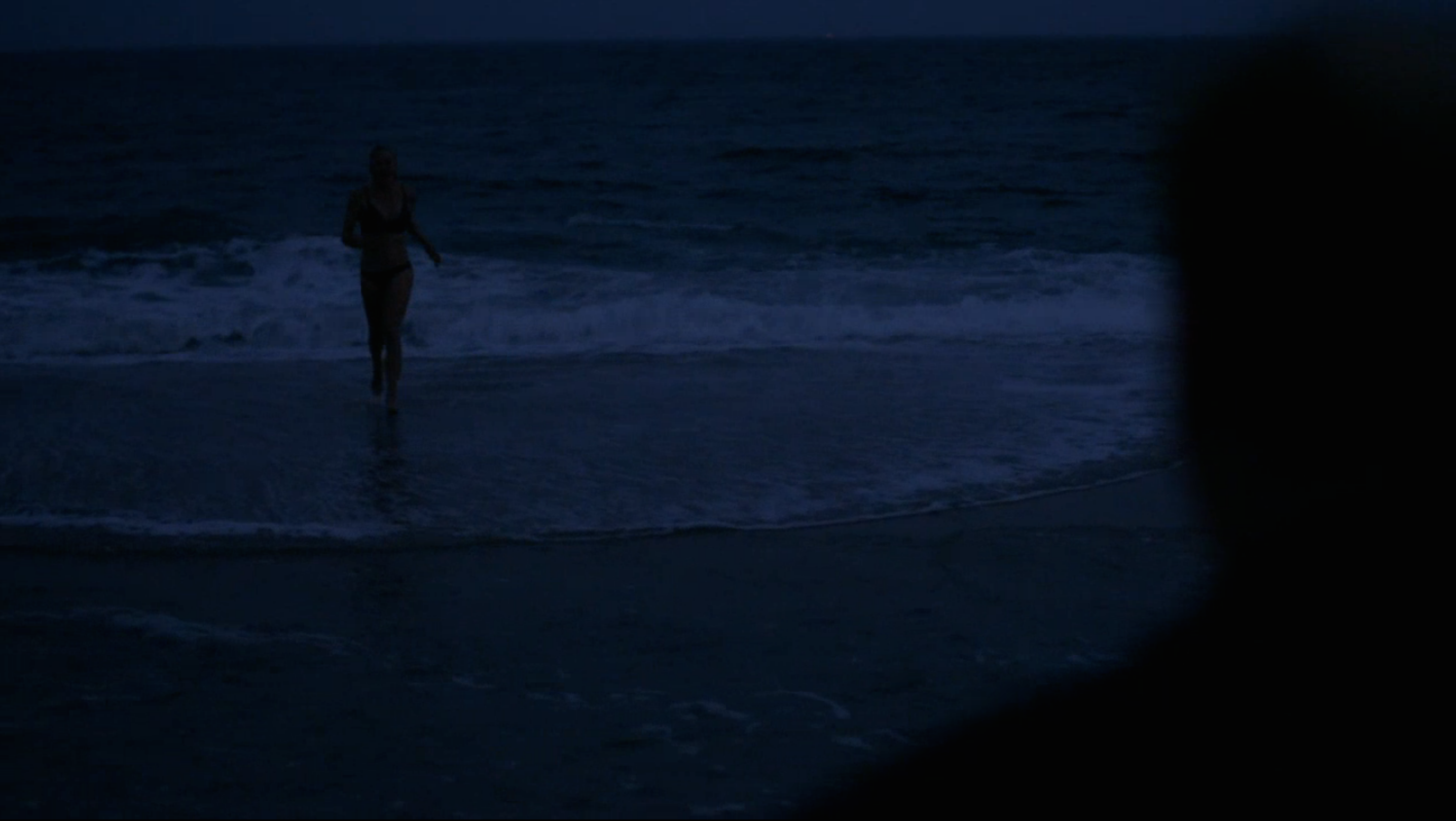 Louie’s
struggles to understand women and the pivotal moments of connection — particularly
after a seeming irreconcilable misunderstanding — are often expressed as half-conscious experiences. Yet there’s also an acute awareness
of details that, while limiting his perspective, nurtures his comedic sensibility.

In the scene in which the young Louie is
staying at a hotel with his then-wife, it first appears to be a dream when his
wife speaks to him and only a muted sound is heard. He then opens an until-then
unperceived window, and we hear her voice. This sheds some light on
his interest in Amia, a Romanian woman who does not speak English: He meets Amia while
helping her aunt when she is trapped in an elevator (another kind of metaphor
for a dream-limbo space). Their inability to verbally communicate becomes an
exercise in the speechless evocation of feeling and words — in one surreal scene, she
mimes the process of showering in order to relate the word “hair dryer,” and in
another she and Jane unexpectedly break into a joint concert of violins. 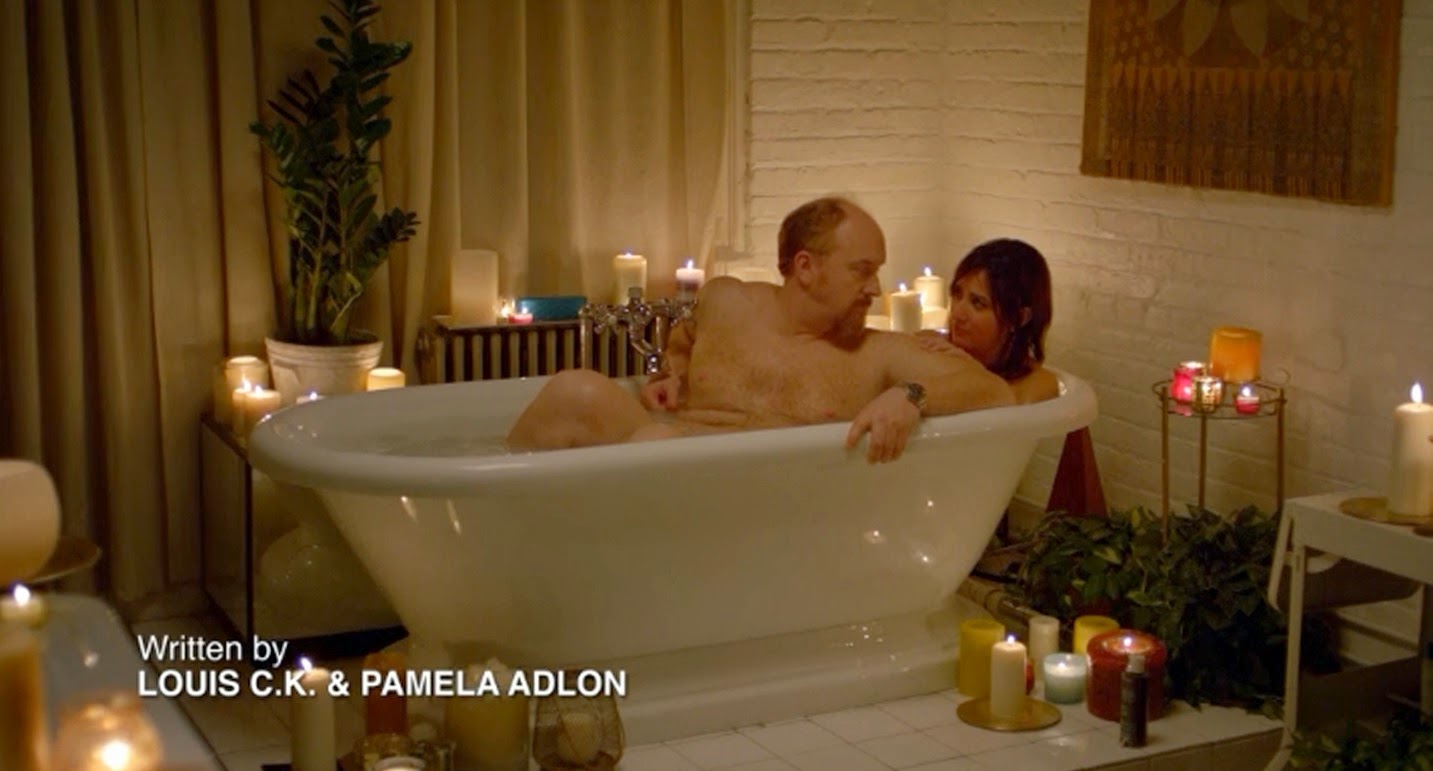 The flooding
imagery of the fantastical storm returns in the season finale’s quiet closing
scene, in which Louie finally unburdens himself, undresses, and joins new
girlfriend Pamela in a bath, causing all its water to overflow. Yet, there’s no longer any anxiousness about escape. In Lynch’s “Eraserhead,” the protagonist baths with his
neighbor only to begin drowning, transported to a darker, menacing place.
Louie, however, is finally able to remain in the moment with Pamela, afloat in
her arms, at last at ease in his own skin.

Dream logic
and its subversion of the normalized boundaries of tone, genre, and between
reality and fantasy add layers of texture to “Hannibal” and
“Louie,” offering openings in our perception that draws us closer in
curiosity. These series dare audiences to discover truth through creation, with
the promise of a lucid dream that may nevertheless have started as a
nightmare.