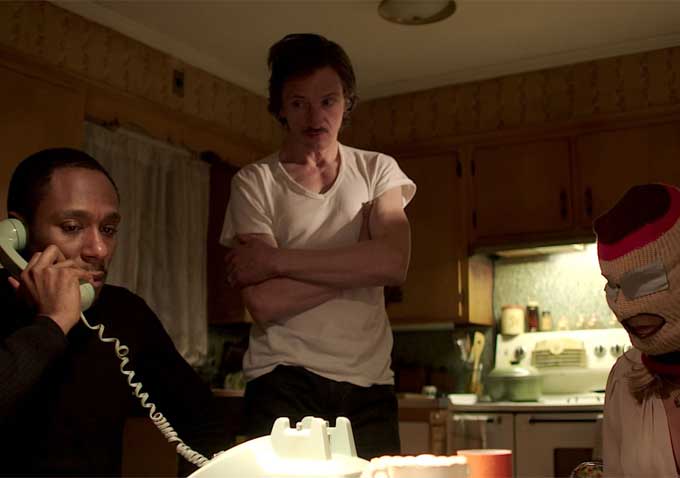 Writer-director Daniel Schecter’s first two features, “Goodbye Baby” and “Supporting Characters,” were ultra-low-budget character studies about ordinary young people struggling through their private and professional lives with self-deprecating wit. “Life of Crime,” Schecter’s stylishly fun and star-heavy adaptation of Elmore Leonard’s novel “The Switch,” has little in common with those earlier works — but it shares their foregrounding of playfulness over plot.

More in tune with the original material than Quentin Tarantino’s “Jackie Brown,” the story to which it’s technically a prequel, “Life of Crime” involves money-hungry kidnappers, a racist gun nut and mean-spirited philanderers, but moves along with the sleek cheeriness of a romantic comedy. Making lunatics and desperation into a breeze, Schecter does justice to his source material.

None of that, however, makes “Life of Crime” particularly memorable. Instead, it’s a showcase of proficient storytelling always eager to entertain — and thus owes much of its appeal inherent to Leonard’s work. Like many of his yarns, “Life of Crime” involves smooth-talking criminals who bring a comical humanity to their work. It doesn’t take long to establish the basic premise: Set in Detroit in the late 1970s, the story involves the plight of crooked real estate developer Frank Dawson (Tim Robbins), whose clueless wife Mickey (Jennifer Aniston) gets kidnapped by scheming thugs Ordell (Mos Def) and Louis (John Hawkes) in a feeble bit to extort $1 million dollars from the man while he’s in Florida.

But Frank, actually on vacation with his paramour Melanie (Isla Fisher) and intending to divorce his wife, sees a greater opportunity to use the situation to get around alimony payments. The clash between domestic and criminal agendas establishes an enjoyably off-kilter series of showdowns that go down with ease, as Schecter fills each scene with a combination of snarky characters and scowls of frustration. The only real peril comes from the character of Richard (Mark Boone Jr.), the racist neo-Nazi goon whose home the kidnappers use to detain Mickey. But even his lunatic antics play like a prolonged joke.

Most of the movie centers on the burgeoning relationship between Mickey and the ultimately good-natured military vet Louis as a predictable strain of Stockholm Syndrome bleeds into their relationship. Together, Aniston and Hawkes wouldn’t be out of place in a Capra film, but just when their chemistry borders on mushiness, the plot thickens: Ordell, the shrewd strategist played as an older man by Samuel L. Jackson in “Jackie Brown,” realizes that they haven’t considered the value of Frank’s other woman in their plan and decides to track her down.

In theory, that decision could lead to a pile up of circumstances that layer one new piece of plot information on top of another. However, “Life of Crime” never loses its lightweight feel. Its best moments are amusing one: The kidnappers’ ongoing attempt to reach Frank by phone, instead reaching his girlfriend and running into a wall, wouldn’t seem out of place in a comedy sketch, and Mickey’s sole attempt to escape has a similarly slapstick dimension.

Though these moments fit the energetic atmosphere, they also dominate with a constant goofiness that means there’s no real sense of danger to the proceedings and the characters’ problems only run surface deep. “Life of Crime” downplays their anarchic sensibilities for a shrug of plot developments.

Still, the cast strengthens the material by embracing its vivacious qualities. Aniston tops any of her recent performances with a spirited turn that harkens back to her neurotic days on “Friends,” while Mos Def makes for a particularly breezy presence with a wry grin. Robbins, who looks like he’s aged 30 years and gained 40-odd pounds, forms an amusingly slimy antagonist, while Will Forte — as the naive man who hopes to seduce Aniston’s character but won’t lift a finger when he finds out she’s kidnapped — continues to expand his range with a hilariously conflicted role. Schecter surrounds their irreverent situations with jolly flourishes: an exuberant score by The Newton Brothers is filled with whistling interludes and upbeat tempos complimented by cinematographer Eric Alan Edwards’ colorful, pulp-ready imagery.

Viewed in terms of these achievements, “Life of Crime” feels like a familiar trip worthy of a second visit. Completed in the immediate aftermath of Leonard’s death, it stands as a sufficient ode to the appeal of his work. The movie ends with the implication that the plot has only just begun, implying that even if Leonard himself is gone, his universe of conniving delinquents will continue to thrive indefinitely.

A version of this review ran during the 2013 Toronto International Film Festival. “Life of Crime” opens in limited release and on VOD platforms this Friday.

This Article is related to: Reviews and tagged Elmore Leonard, Jennifer Aniston, Life of Crime, Reviews