'Silver Linings Playbook,' 'All Is Lost' and More Films Streaming on Netflix this September 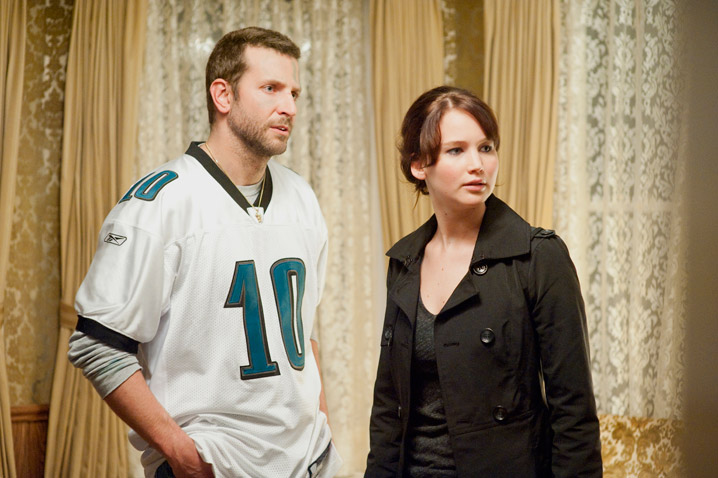 Here are the full list of films Netflix will release this upcoming month (descriptions courtesy of Netflix):

“A Simple Plan” (1998)
Bill Paxton, Bridget Fonda, Billy Bob Thornton, Brent Briscoe, Jack Walsh, Chelcie Ross
When brothers Hank and Jacob discover a dead body and millions of dollars in cash in a downed plane, they plot to hide the loot and split it later. It’s a simple plan — until things go murderously awry amid suspicion and mistrust.

“Crocodile Dundee” (1986)
Paul Hogan, Linda Kozlowski, John Meillon, David Gulpilil, Ritchie Singer, Terry Gilliam, Mark Blum
When a New York reporter (Linda Kozlowski) plucks crocodile hunter Dundee (Paul Hogan) from the Australian Outback for a visit to the Big Apple, it’s a clash of cultures and a recipe for good-natured comedy as naïve Dundee negotiates the concrete jungle. Dundee proves that his instincts are quite useful in the city and adeptly handles everything from wily muggers to high-society snoots without breaking a sweat. Hogan’s script earned an Oscar nod.

“Detention” (2011)
Shanley Caswell, Josh Hutcherson, Dane Cook, Spencer Locke, Aaron David Johnson, Jan Anderson
In this genre-bending slasher flick, a high schooler gets slapped with detention on the same night as senior prom. But plenty of other kids will also be missing the big event when a past-her-prime prom queen shows up to slay them.

“Flubber” (1997)
Robin Williams, Marcia Gay Harden, Christopher McDonald, Ted Levine, Clancy Brown
On the verge of losing his girlfriend and his job, a scatterbrained college professor accidentally invents a bouncy material called Flubber. The substance stands to save the day — if the professor can defeat the many rivals who try to sabotage him.

“Girlfight” (2000)
Michelle Rodriguez, Jaime Tirelli, Paul Calderon, Santiago Douglas, Ray Santiago, Víctor Sierra
First-time director Karyn Kusama’s powerful film tells the story of Diana (Michelle Rodriguez), a Brooklyn high-schooler who gets little support from her dismissive single father and takes her frustrations out on her classmates. But when she wanders into a local boxing gym, she’s instantly drawn to the action. And though it’s a male-dominated world, boxing provides her a newfound discipline and sense of purpose, as well as a positive male role model.

“Guess Who” (2005)
Bernie Mac, Ashton Kutcher, Zoe Saldana, Judith Scott, Hal Williams, Kellee Stewart
Ashton Kutcher stars in this remake of the 1967 classic “Guess Who’s Coming to Dinner?” But the tables are turned this time around, as he plays the fiancé of an African American woman who’s met with skepticism and suspicion from her father.

“Lords of Dogtown” (2005)
Emile Hirsch, Victor Rasuk, John Robinson, Michael Angarano, Nikki Reed, Heath Ledger
A group of outcasts from California’s Venice Beach change the face of skateboarding forever in this 1970s tale based on a true story, written by “Skateboard Godfather” Stacy Peralta, one of the competitive skaters portrayed in the film. Known as the Z-Boys, the radical riders invent a brazen style of skating and deal with heartache when the sport they live for turns into big business. Heath Ledger, Emile Hirsch and Rebecca De Mornay co-star.

“Mirage Men” (2012)
Fascination and controversy regarding UFO sightings have been with us for centuries, but this absorbing documentary offers a disturbing new thesis: that the U.S. military has been distributing false information about them for decades.

“School of Rock” (2003)
Jack Black, Adam Pascal, Lucas Papaelias, Chris Stack, Sarah Silverman, Mike White, Lucas Babin
Fired from his band and hard up for cash, guitarist and vocalist Dewey Finn finagles his way into a job as a fourth-grade substitute teacher at a private school, where he secretly begins teaching his students the finer points of rock ‘n’ roll.

“Small Apartments” (2012)
Matt Lucas, Billy Crystal, Juno Temple, James Caan, Peter Stormare, David Koechner
Franklin Franklin has a dead landlord on the kitchen floor and an investigator (Billy Crystal) questioning him. But none of this fazes Franklin. He waits each day for a letter from his brother (James Marsden) who has the secret that can set him free.

“Swiss Family Robinson” (1960)
John Mills, Dorothy McGuire, James MacArthur, Janet Munro, Sessue Hayakawa, Tommy Kirk
After being shipwrecked, the Robinson family is marooned on an island inhabited only by an impressive array of wildlife. In true pioneer spirit, they quickly make themselves at home but soon face a danger even greater than nature: dastardly pirates. A rousing adventure suitable for the whole family, this Disney adaptation of the classic Johann Wyss novel stars Dorothy McGuire and John Mills as Mother and Father Robinson.

“All is Lost” (2013)
Robert Redford
In this harrowing drama — which has no dialogue — Robert Redford portrays a man stranded alone at sea, courageously battling a ferocious storm as he struggles to survive with just a sextant and maritime maps to guide him.

“Le Week-End” (2014)
Jim Broadbent, Lindsay Duncan, Jeff Goldblum, Olly Alexander, Judith Davis, Xavier De Guillebon
Returning to Paris long after their honeymoon there, a British couple hopes to rediscover the magical feelings of their early years together. There, they meet an old friend whose perspectives on love and marriage help them recover what was lost.

“Your Sister’s Sister” (2011)
Emily Blunt, Rosemarie DeWitt, Mark Duplass, Mike Birbiglia
Jack, who is mourning the death of his brother, has a complicated relationship with his best friend, Iris, who used to date his brother. Their chaotic situation becomes even more tangled when Jack has a drunken tryst with Iris’s flighty sister.

“Who Is Dayani Cristal?” (2013)
Gael García Bernal
In the oppressive desert heat, Arizona authorities find a man’s decomposing body with only one clue to his identity: a tattoo reading “Dayani Cristal.” Gael García Bernal portrays the unknown man in dramatic segments of this intriguing documentary.

“Dennis Miller: America 180” (2014)
Five-time Emmy winner Dennis Miller takes a look at the state of the nation in a stand-up routine that touches on health care and climate change.

“Filth” (2014)
James McAvoy, Imogen Poots, Jamie Bell, Joanne Froggatt, Eddie Marsan, Jim Broadbent
An arrogant, corrupt cop who believes he’s the only competent person in his department sees a recent murder case as a path to promotion. But the investigation brings the deluded officer into a rendezvous with reality that he’s wholly unprepared for.

“The Moment” (2013)
Jennifer Jason Leigh, Martin Henderson, Alia Shawkat, Marianne Jean-Baptiste, Meat Loaf
After her lover vanishes, a photojournalist winds up in a psychiatric hospital, where she tries to make sense of her fragmented memories — and begins to uncover some unexpected and disturbing truths.

“Grace Unplugged” (2013)
AJ Michalka, James Denton, Kevin Pollak, Shawnee Smith, Michael Welch, Jamie Grace
Every Sunday, 18-year-old Grace performs at church with her ex-rock star father, but she longs to share her talent with the rest of the world. Heading for the bright lights of Los Angeles, she soon must choose between stardom and faith.

“Justin and the Knights of Valor” (2013)
Antonio Banderas, James Cosmo, Rupert Everett, Freddie Highmore, Saoirse Ronan
In this animated saga set in medieval times, a young boy slips away from his family home and begins a long journey to pursue his dream of becoming a knight. Seeking instruction from three wise monks, he makes his way to their remote abbey.

“One Day” (2011)
Anne Hathaway, Jim Sturgess, Patricia Clarkson, Romola Garai, Rafe Spall, Tom Mison, Jodie Whittaker, Joséphine de La Baume, Ken Stott
After a romantic tryst on college graduation night, Emma and Dexter pursue separate dreams. This romantic drama based on a novel of the same name checks in with them each year on the same date, tracking their personal and professional progress.

“Silver Linings Playbook” (2012)
Bradley Cooper, Jennifer Lawrence, Robert De Niro, Jacki Weaver, Chris Tucker, Julia Stiles, John Ortiz
After a stint in a psychiatric hospital, bipolar Pat has no choice but to move back in with his football-obsessed parents. While he tries in vain to reconcile with his wife, Pat meets a woman who’s as unstable as he is — and she changes his life.

“3 Days to Kill” (2014)
After a terminally ill secret agent retires to spend his remaining time with his family, he’s asked to complete a dangerous last mission in exchange survive its hallucinatory side effects

“The Double” (2013)
Jesse Eisenberg, Mia Wasikowska, Wallace Shawn, Noah Taylor, Yasmin Paige, James Fox
Jesse Eisenberg plays the dual roles of a timid office worker and his charismatic doppelganger in this cinematic adaptation of a Dostoevsky tale. First spotted on the bus, then at work, Simon’s double may share his looks, but he’s no carbon copy.

“Lullaby” (2014)
Garrett Hedlund, Richard Jenkins, Jessica Brown Findlay, Anne Archer, Jennifer Hudson
Long after breaking ties with his family, Jonathan learns that his long-ill father has elected to take himself off of life support in two days. Drawn in by the dire news, Jonathan returns to face his kin in an intense emotional encounter.

When a couple low-level crooks make a dumb move by robbing a Mob-protected poker game and unwittingly bringing a recession to the area’s criminal economy, a slick enforcer is hired to track down the offenders and take care of business.

This Article is related to: News and tagged All Is Lost, Netflix, Silver Linings Playbook, Streaming, The Double