Sleeper of the Week: "What If" 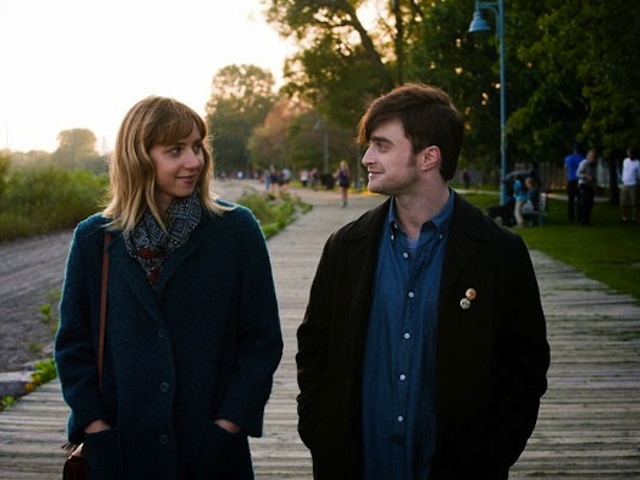 Nobody sees everything, but Criticwire is here to point
out films that might get lost otherwise. Sleeper of the Week takes a film that
a only few critics have seen and shines some light on it.

“What If”
Dir: Michael Dowse
Criticwire Average: B+

Few genres have a worse hit-to-miss ratio than romance comedies, but Michael Dowse’s new film “What If” (originally given the much-better title “The F Word” at its Toronto premiere) has some critics believing in the romcom again. The film stars Daniel Radcliffe as a med school dropout who falls for cartoonist Zoe Kazan at a party, only to find out that she’s already in a relationship. Radcliffe tries to navigate a friendship with someone he’s falling for (and who’s clearly attracted to him), but that’s easier said than done.

“What If” doesn’t break any new ground in the genre, but the leads are appealing and Radcliffe’s rival (Rafe Spall) isn’t just some one-note jerk to dispose of by the time the credits roll. But the film’s greatest asset is the supporting cast, with Adam Driver playing Radcliffe’s goofball friend and Mackenzie Davis as Driver’s liberated girlfriend. Their freeness and lack of self-consciousness is a welcome contrast to Radcliffe’s mopeyness, and if nothing else, “What If” features a scene in which Driver joyfully yells, “I’ve just had sex and I’m about to eat NACHOS!”

Led by Radcliffe and Kazan’s great chemistry, [“What If”] explores what it means to be friends, skillfully avoiding the usual romantic comedy pitfalls that have destroyed the genre in recent years. From Wallace’s family bonding over a horror movie to Adam Driver’s nacho reverence as best friend Allan, the film broadens the personalities and interests far beyond weaker examples of the genre, offering a perfect follow-up to Kazan’s trope-destroying “Ruby Sparks”. Read more.

The film has a cheerful attitude with an outstanding soundtrack of great songs that enhance the mood and fit perfectly with the scenes they’re a part of. It’s hilarious and the dialogue is witty and smart and moves fast. Part of what makes it work so well is the relationship between Kazan and Radcliffe, and how the two play so perfectly linked to each other. This establishes a great model for us to compare as the two navigate the ups and downs of the rest of their lives. Read more.

“What If” is always thoroughly pleasant, and that’s entirely due to the cast, who all turn in breezy performances. Radcliffe and Kazan each do a good job, even if their chemistry could be better. And as you might expect, Driver is a freight train who steals the movie pretty much every time he’s on screen, while Mackenzie has the task of keeping up with him, and admirably does for the most part. But even perfectly good turns from this attractive ensemble can’t patch up the mounting minor issues piling up onto “What If.” As far as diversions go, you can do far worse, but this is a one night stand of movie, and not the long term keeper you’ll want to call in a few days to make another date. Read more.

It’s worth noting that both actors are at crucial stages of their careers: Radcliffe seems to be working in as many modes as possible to free himself from his “Harry Potter” roots while Kazan’s profile is steadily rising. With “The F Word,” they manage to sustain the material in certain key scenes but can’t liven it up. After the usual spats and sudden romantic trips across the globe in which central characters confront each other about their feelings, “The F Word” recedes into unimaginative sweetness. Read more.

“What If’s” main problem is a good problem to have: The supporting characters are livelier than the leads, and it’s hard not to want to spend more time with them instead. As Chantry’s more sexually aggressive sister Dalia, Megan Park pings nicely off Chantry’s uptightness and uncertainty, but it’s Adam Driver and Mackenzie Davis—as Wallace’s best friend Allan and Allan’s new girlfriend, Nicole—who deserve their own, R-rated spinoff vehicle. Their more spontaneous, volatile relationship is meant to contrast with the bottled-up tension between Wallace and Chantry, and together, Allan and Nicole make a good argument for sex and nachos (in that immediate order), and the pursuit of other such unsavory cravings. Read more.

If you’re allergic to too much winsomeness, you’ll have to steel yourself for a few things in “What If”: Chiefly, you might have to get used to Kazan and her Blythe-doll eyes — she’s like an adorable acorn in a mini coat and tights. But somehow, Kazan keeps it all in check, and her over-the-top pixie quality probably helps draw off some of Radcliffe’s nervous energy. He’s terrific, regardless — he’s a good leading man precisely because he isn’t a model of poise. When Wallace fills up the air with evasive chatter, we can see the desperation in his eyes: He loves a girl who’s got a serious, live-in boyfriend, for God’s sake, and at certain times in life, that’s the biggest possible problem any human being could possibly have. Radcliffe makes us see both the misery of the situation and its utter absurdity: He’s being tortured, but he makes it all seem so casual. Read more.

This Article is related to: Reviews and tagged Daniel Radcliffe, Michael Dowse, Sleeper of the Week, What If, Zoe Kazan