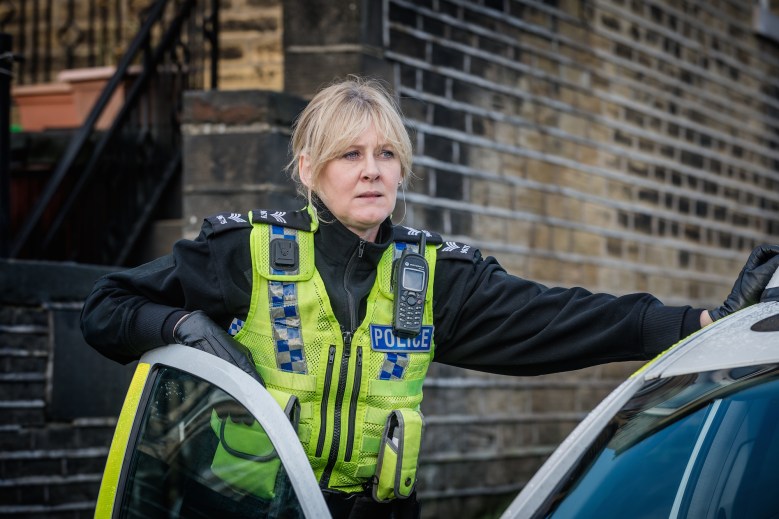 Indiewire caught up with Wainwright, who learned of “Happy Valley”‘s pick-up for a second season just recently, to chat about her career, sexism in British TV, and the smart, complex female characters of a certain age who populate her shows.

Did you always know you wanted to be a writer?

No, I was actually going to be a painter. The writing was something that was kind of secret, nothing I shared with anyone. It was only when I got to University and switched to English that I decided it was something I wanted to start showing to people.

Now you’ve got three series on-air: “Happy Valley,” “Last Tango In Halifax” [a PBS series about 70-somethings who rekindle a childhood romance], and “Scott & Bailey” [a modern day “Cagney & Lacey” co-created by Diane Taylor, available on Hulu Plus and Vudu]. What’s it like for a female writer/producer in England? Or do you even think in those terms?

I think if you’re talented, and you’ve got what it takes, it doesn’t matter what sex you are. It seems to me it’s harder in America. There’s a lot more sexism in the American system, certainly on-screen. Women have to be very thin and very beautiful, whereas men can be much more eccentric; they can be old and fat. In the UK, we can portray women as they really are.

READ MORE: Derek Jacobi and Anne Reid Romance ‘Last Tango in Halifax’ Will Have a Second Season on PBS

Do you feel it’s less sexist behind the scenes?

I’ve never worked in America, so I don’t know. But in this country, I think there’s a lot less discrimination against women. If you write what [executives] want to put on their channel, it doesn’t matter what sex you are.

There are a few of us: Kay Mellor, and Heidi Thomas, who writes “Call The Midwife.” But I think I’m probably the only one who’s got three shows going.

You’ve said you’re a feminist, but that your writing isn’t motivated by that — you just like writing women. And you’re known for creating strong ladies of a certain age. Is that a hard sell?

It isn’t for me. I think it might be for other people. I’m often surprised by how few middle age and elderly women there are on TV. I’ve cornered the market a bit. I’d like to see more. One of the greatest examples is the U.S. show “Nurse Jackie.” I would love to see more women like that on TV: capable, middle aged, clever, sassy.

Who just happened to have a drug addiction?

“Last Tango” and “Scott & Bailey” were both initially turned down. How did you turn those “nos” into “yeses”?

We didn’t. The channels came back to us and said they’d changed their minds. I guess it had something to do with the way the market is [and] a change in people at the top who had different agendas about what they wanted to see. We thought they were both dead in the water.

“Prime Suspect” was 20 years ago. I spent a lot of time with a lot of women police officers. None of them seemed to think it was a big deal they were women. The police have gone through a lot of reforms. There might be some hidden sexism, but now it’s really not that unusual for a woman to be the head of an investigation. To try and make an issue out of that would have felt rather old fashioned. 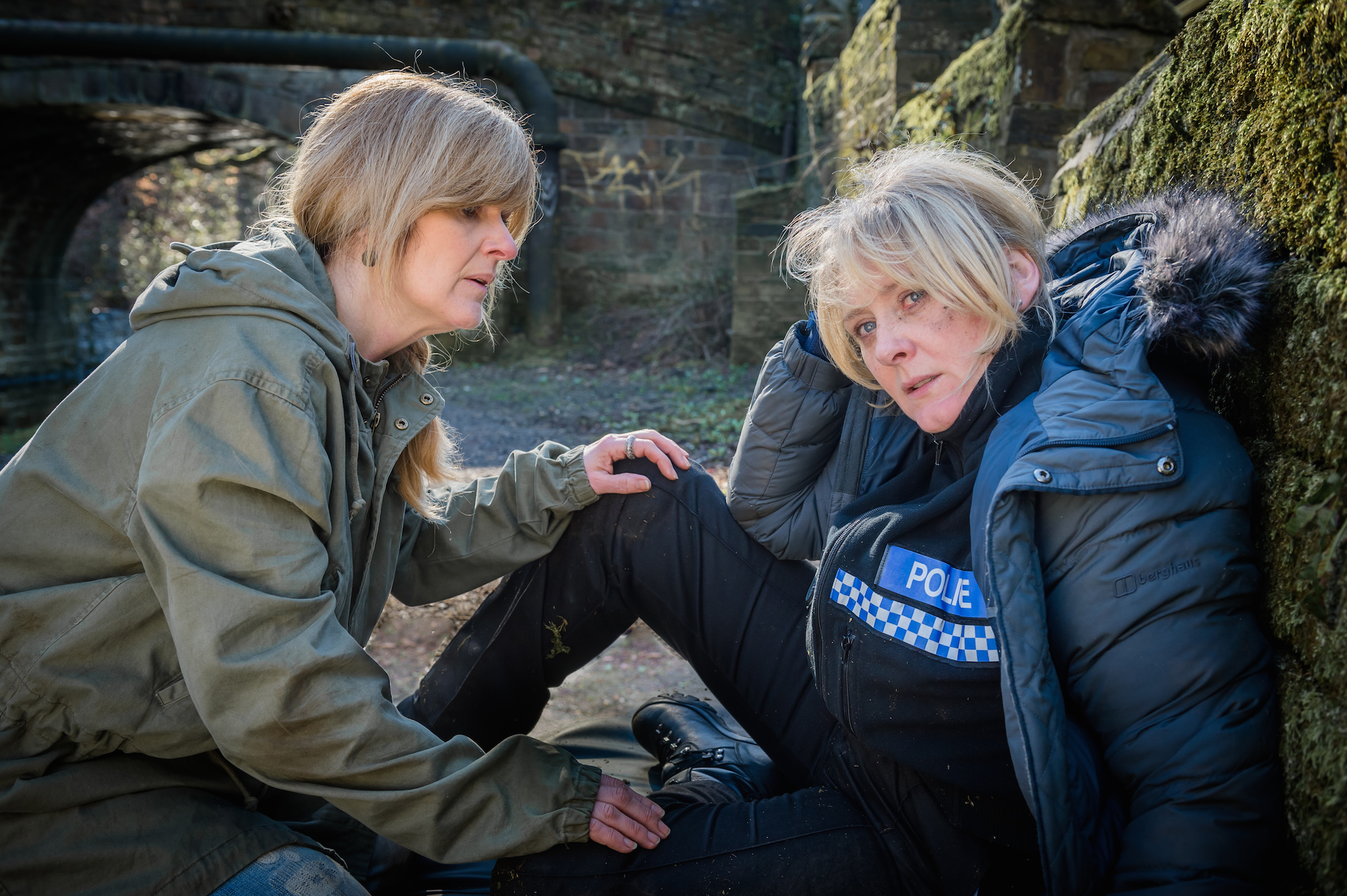 You really heaped it on Catherine in “Happy Valley,” letting the audience know right away with her opening lines: “I’m divorced, I live with me sister who’s a recovering heroin addict, I’ve two grown-up children, one dead, one I don’t speak to, and a grandson.” And that’s only the half of it! Did you write this for and discuss it with Lancashire beforehand?

No, but she read the script well in advance, a lot earlier than normal. I did write it for her.

There’s actor cross-over between your shows: Nicola Walker did an arc on “Scott & Bailey,” and she stars in “Last Tango” with Lancashire, who’s also on “Happy Valley.” You seem to have a repertory company.

[Laughs] I have people I like to write for. But I have to keep an open mind and can’t use the same people all the time. On “Happy Valley,” we had a bit of a rule that we couldn’t have anyone else from “Last Tango” because it’s set in exactly the same part of the world.

On “Happy Valley,” you also directed for the first time (Episode 4). You said you’ve wanted to do it for years, but lacked the confidence. How did you gain it?

It wasn’t just the confidence, it was finding the time; and of course prepping to direct is time-consuming as well. Once I committed to doing it, it was pretty nerve-wracking. But it went pretty well. Actually, I’d be nervous to do it all over again. It’s a scary thing to do.

Because of the Yorkshire accent, I tend to watch these shows with closed captioning on so I don’t miss anything. Do you worry about the shows making the transition here?

No, because I only write for the British audience. It’s like watching “The Killing” or anything like that — part of what is hopefully interesting about the shows is that you’re entering our world, and that’s how we speak. If I were to worry about everybody understanding every little thing, I probably wouldn’t write at all. It’s part of [the shows’] charm and feels very authentic.

You gave the show a happier ending than the reality because your step-dad died three years later.

He never saw the show. He died before it was made. It was unfortunate, but I think my Mom sees it as a fitting tribute to their relationship. It’s an uplifting thing that two people at 75 really fall in love with each other. And we wanted to show that.

We talk a lot in the U.S. about trying to achieve balance between work and personal life, especially with women. You’re married, you have two teenage sons, you write and produce three shows. How does that balance for you?

It’s difficult at the moment. The kids are on their long summer vacation, and it’s hard when they’re in and out of my office every five minutes. I do worry that I work pretty obsessively. I worry that when it stops, I’ll probably go a bit mad, that there won’t be anything else in my life. But I guess I’ll cross that bridge when I come to it.

Do you work on all three shows simultaneously?

I’m not writing for “Scott & Bailey” anymore. It’s being written by Amelia Bullmore [who plays Gill Murray]. So I won’t be hands-on involved. But I completely write the other two.

Is the salve for everything in England “a cuppa tea”? With the exception of the “Scott & Bailey” ladies, who repair to the bar after a long day, your characters are always offering each other tea. Is that the English way of being polite?

You think they say it too much?  Tea is quite big in Yorkshire.

I read you’re a fan of U.S. television. What are some of your favorite shows?

Oh yeah. I think “Nurse Jackie,” it kind of went off a bit, but the first four seasons were that perfect combination of fantastic dark humor and proper drama. I thought it was an extraordinary piece of work.

This Article is related to: Television and tagged Happy Valley, Netflix