Watch: How 'Canopy' Director Aaron Wilson Pulled Off a Night Scene in the Middle of a Tropical Storm 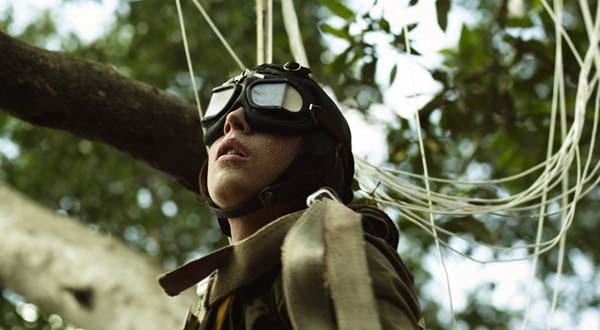 Logistics of Shooting the Scene

This scene takes place about 20 or so minutes into the film and it’s an important one for me because this is where the film suddenly shifts from being about a single protagonist navigating a hostile world alone, to a duo that develop a necessary bond. It’s also the first time in the night portion of the film where we open up the world and explore the space in clear wide shot, so this posed quite a few logistical challenges for us.
From the outset, it was always going to be difficult for us to make a film set mostly at night, set under a full moon in a tropical jungle, working with very little money with under two weeks to film. My cinematographer (Stefan Duscio) and I spent several weeks in the Singapore jungles and mangroves trying to strategize just how we’d light the numerous night scenes to maintain consistency and authenticity. Much of the film was approached with a detailed strategy and complete set of storyboards, but the shoot involved lots of inventiveness when nature would intervene and throw our plans into disarray.
This particular scene needed a lot of thought because there’s so much happening, it’s quite long and it takes place in an exposed clearing. Our two lead characters – one Australian and one Singaporean – meet for the first time, then almost straight away they are in harm’s way as a Japanese convoy heads towards them. They must hide, or else be discovered and captured.
I wanted to convey suspense using a big wide frame for the whole scene, which meant creating elaborate lighting towers to light from overhead to replicate a sense of moonlight and carefully choreographing every movement. The problems for us began when a tropical storm set in for two hours and wiped out our lighting towers. The location was now sodden and glistening, which in wide shot was hard to match with the proceeding tighter angles. There was a lot more light being reflected from all angles because of the wet foliage so things no longer looked moody and misty. It was clear that our carefully designed overhead lighting scheme was no longer going to work with this space. With no extra time at our disposal to shoot this scene at a later date, my cinematographer, gaffer (Bert Tan) and I had to rethink how we were going to approach the lighting, filming and choreography.
At the opening of the scene our two leads needed to literally run into each other, then suddenly vanish once the Japanese soldiers appeared. I was also still set on capturing the scene in its entirety in wide shot. So we decided to use smoke machines to create further layers and mystery in frame, and we adopted a unidirectional side lighting scheme to create more shadow in the mid and foreground. This helped with explaining how two frightened soldiers running in opposite directions might collide in an open clearing. We also removed the lighting in the deep distance so that when our Japanese troops appeared, they seemed to emerge from darkness in the back of frame and suddenly appear right in front of us. Instead of our lead characters running for cover as planned, I chose to have them dive into the dense, wet undergrowth and essentially hide in plain sight. Our rebuilt lighting scheme allowed us to use shadows to strong effect, so to the audience, and the approaching Japanese soldiers, the lead characters totally disappeared once they hit the ground. We had the Japanese soldiers move with measured step towards camera from the back of frame, essentially walking straight past our hiding characters. We let the action play out in the big wide shot so that the threat of discovery was very real with every footstep made by the advancing Japanese soldiers. Then, when these soldiers passed out of frame in the foreground, we’re left with a peaceful jungle scene from which our two leads emerge. The jungle is once again quiet and our two leads can compose themselves before moving on.
I think maybe it’s a memorable scene for me because of the challenges it posed while filming. But more than that, there is a lovely interplay of stillness and movement in this scene. It’s the collision and coming together (symbolically and literally) of two cultures/backgrounds: just two boys who are not really soldiers. It’s also a point where the two actors met in real life, and so as their characters have to get used to each other on screen, so too must the actors learn to work with each other’s acting styles and mannerisms to move forward in the shoot. It’s probably the most wordy scene in the film, which is to say it actually has some lines of dialogue, but I think this scene is resonant because it evokes so many different feelings. The dialogue really isn’t what drives the scene at all … it only serves to show people from totally different worlds. It’s the space – or breath – and soundscape in the scene that is most communicative and evocative. As the scene progresses, these two boys from different backgrounds must decide if they will work together in the face of a common fear. It sets the tone for a relationship based on connection through means other than verbal communication.
The scene is tense, sweaty, visceral, breathy … it’s not at all about people from different backgrounds or their roots being important, or the war: It’s about two human beings, their connection and the very human feelings of fear, frustration and confusion. The challenges in this scene were overcome by the strength of a united cast and crew working hard to make the best film they could, focusing always on an emotional honesty and truth.

Setting the Tone: How we made it look expensive and epic with very little money

“Canopy” is an intimate story about the vulnerability of young men lost in a hostile landscape, set against a backdrop of war. It might be set in wartime Singapore in 1942, but it is universal in its themes of the fear and isolation of war and the effect it has on the individual.
From the outset of the film, I always wanted to set the tone and firmly establish a sense of place, time and situation. As such, the story in my film takes place in the undergrowth of dense tropical jungle, but there is a deadly war being waged beyond the greenery in the background. During February 1942 when the story in “Canopy” takes place, Singapore and Malaya were in a serious state of turmoil. The Japanese had made their way down the Malayan peninsula, pushing back allied Australian, Indian, local Chinese, New Zealand and British troops as they advanced towards Singapore. On 8 February 1942, the Japanese crossed over into Singapore Island and their week-long invasion began with troop and air invasions.
So to give my film a serious sense of this chaos that was taking place, I knew the opening to the film had to be visceral and have an epic sense of scale. The problem was that we were working with such a tiny budget. I chose to open the film with one minute of black, to aurally set the tone of Singapore being a mix of eastern and western sounds music and street texture. Then warfare invades these sounds of the everyday, establishing a sense of disorientation and confusion from the very beginning. We then cut to a five minute sequence comprising mostly of lengthy, panning wide shots over the top of Singapore. Each of these wides was carefully framed so that scenes of 1942 Singapore (including a skyline with buildings of the time) and warfare (billowing smoke and dogfights in the skies) could be incorporated using VFX. The soundscape was also densely layered and rich with sounds blending back and forth between natural jungle textures, wartime explosions and droning planes.
My goal was to introduce this world, and the chaos within, with a loud thud. Then, when our protagonist bails from his burning fighter plane and crashes through the jungle canopy, we travel with him and from that point on remain on the ground. If he cannot see the war going on around him, then neither can we. But because we’ve established a strong sense of the war raging around him, this helps to make the sounds in the distance more threatening: to us and our protagonist. And as day turns into night, our soundscape and densely-layered jungle landscapes help to convey a sense of man lost in a foreign and hostile world, and also fearful of that which we cannot see in the distance.

This Article is related to: Toolkit and tagged Canopy, First Person, Video: In Their Own Words