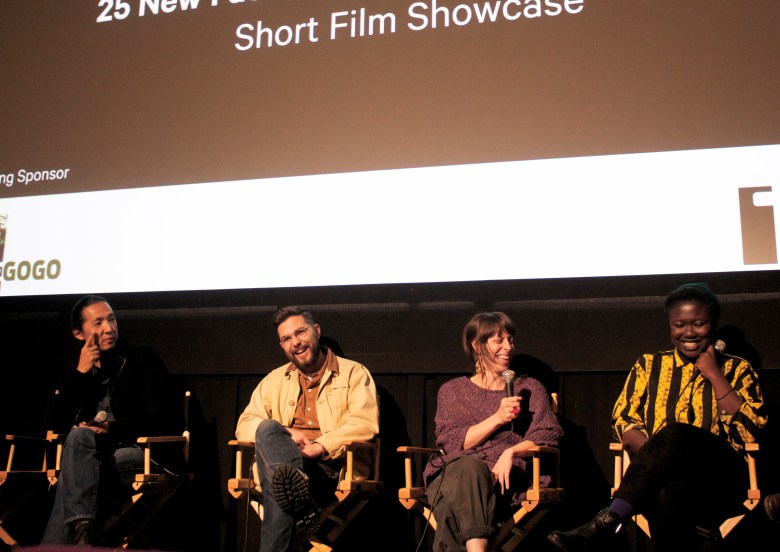 Arguably, features and shorts are different creatures entirely–the feature being a longer, often more complex journey and the short being an anecdote along that journey. Of course, one of the biggest obstacles facing independent filmmakers is financing their feature film, so making a short film seems more plausible. But how can you cultivate your ideas for the length of a short film, and still make it as complex and powerful as a feature? These four filmmakers from Filmmaker Magazine’s recent annual 25 New Faces screening night at the IFC Center, provide some advice below:

1. Nail down the most relevant shooting locations. They will make your short all the more authentic.

“I shot ‘Immaculate Reception’ entirely in Pittsburgh–inside someone’s Pittburgh home, all of my lead actors being from Pittsburgh, including all of the extras. This takes place in a really pivotal time in Pittsburgh history, where the Stealers finally become this winning football team in the 1970’s, and for the story I wanted to tell I really wanted this piece to be as authentic as possible to honor that.” – Charlotte Glynn, “Immaculate Reception”

2. Utilize any and all costuming resources. You never know who or what will come in handy.

“We used our own clothes, our friends clothes, thrift stores, and Good Will stores for the shoot. The 70s’ bra, however, we got from an Eastern European bra store in a slag heap in Western Pennsylvania, which we had to do a lot of research to discover was there, and this bra was really important for our character. For the rest of my costumes, however, my friend whom I worked with at this other unrelated job was able to come in and save me when I had already lost three costume designers, not to mention we were already ten days away from shooting. She had even just come off of ‘Foxcatcher’ but becasue we had worked together before, she was willing to come in and dress all thirty of my extras at the last second.” -Glynn

3. Utilize any and all equipment resources that can improve the production of your film.

“I’ve made both of my big movies in film school, so that gives us a lot of access to equipment. And with ‘Afronauts,’ there’s this guy whose dad worked for NASA who was stationed in the same place as our shooting location in Zambia, and he made money in the tech industry so he was our biggest executive producer and he was able to provide us with equipment as props for our actors, which was really really lucky.” – Frances Bodomo, “Afronauts”

4. Embrace the art of the short film, don’t produce it solely for the purpose of previewing your feature.

“I love the short film as its own form, and I love how it allows directors, no matter how big or small they are, to at least experiment or at least try it out because I believe as a director you need to fail a lot of times in order to make something you are proud of. For example, last year I was on a festival tour film that wasn’t going to become a feature, and this year with a film thats going to become a feature and there’s a huge difference in that audience members still see the short form as a prequel to a feature. Because I made ‘Afronnauts’ a strong short on its own, that has given me a lot of opportunity for make a stronger feature.” – Bodomo

5. Remember: Kickstarter isn’t the only way to finance your film or help with paying people to work on it.

“I worked as a production designer and art director for five or seven years before I made this film, so I have a lot of favors from friends from working for free, so that helped get them to come onto my shoot. I also made connections from paid to work from other people–so all the money I had saved throughout the years and the friends I made came through in the end for my short.” – Robert Eggers, “Brothers”

READ MORE: 10 Tips On Turning Your Short Into A Feature