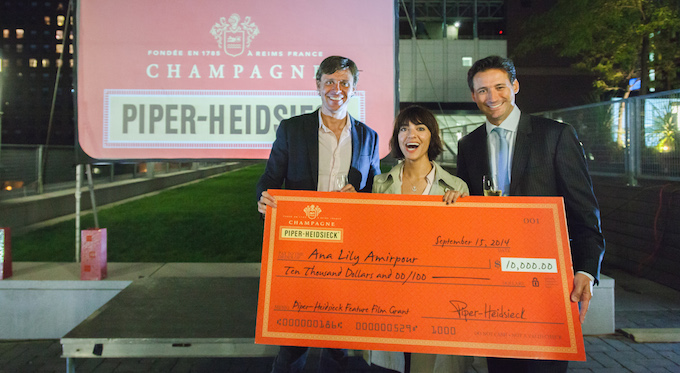 Rooftop Films has awarded fourteen cash and service grants to alumni filmmakers, including its largest cash grant, The Rooftop Filmmakers’ Fund Piper-Heidsieck Feature Film Grant, to director Ana Lily Amirpour. The filmmaker will receive a monetary grant of $10,000 to help her finish her latest feature, “The Bad Batch.”

Rooftop Films has released the following statement: “Selected for its grand and bold style of storytelling, Amirpour’s film is a highly twisted, unusual, romantic, and innovative movie set in a future dystopia. In a desert wasteland in Texas, a muscled cannibal breaks one important rule: don’t play with your food. ‘The Bad Batch’ is a savage love story, like a psychedelic ‘Road Warrior,’ inspired by films like ‘El Topo’ and ‘Wild at Heart.’ Shot in bold saturated hues and stylings of the 80’s & 90’s the film will also feature a wicked techno & western-laced soundtrack.”

Amirpour’s first feature, the Iranian vampire western “A Girl Walks Home Alone At Night,” premiered to critical acclaim in the NEXT section of the 2014 Sundance Film Festival and screened to sold out crowds on the roof of Industry City as part of Rooftop Films’ Summer Series. The director joins an illustrious list of past Rooftop Filmmakers Fund grantees, including Gillian Robespierre (“Obvious Child”), Jeremy Saulnier (“Blue Ruin”) and Benh Zeitlin (“Beasts of the Southern Wild”).

Click here for a full list of 2014 grantees with award details and film synopses. For a quick rundown of 2014 awards, see below: