'The Disappearance of Eleanor Rigby: Them': 'Between Just Enough and a Bit Too Much' 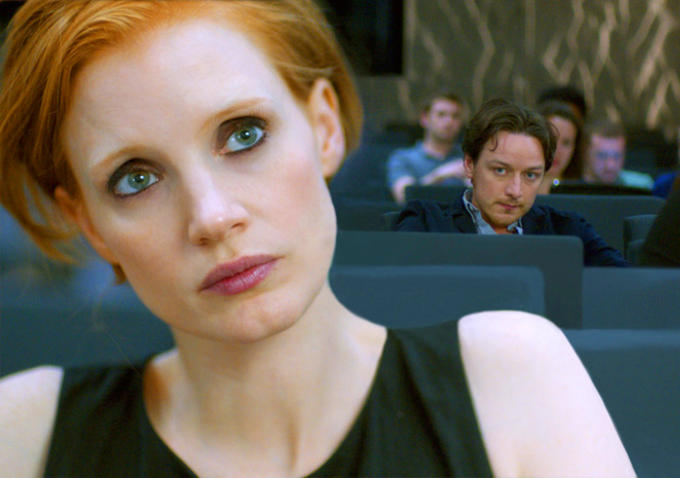 When Ned Benson’s “The Disappearance of Eleanor Rigby” was announced, the primary fascination behind it was how the “Him” and “Her” cuts would differ in perspective. But The Weinstein Company and director Ned Benson chose to take the two-part, three-hour epic and edit it down to one two-hour film, now with the subtitle “Them.” Both of the other cuts will see theatrical release in October, but “Them” comes to the big screen on September 12. And frankly, few seem wholly satisfied with this version.

Nearly every review contains the equivocation that the film may be far more effective in its original form, with many saying that “Them” has been turned into a more conventional love story, and that the shifts between “Him” and “Her” material make it feel almost bipolar. But the most frequent complaint has little to do with the film’s new structure: Benson writes like a first-time writer-director, with the dialogue frequently taking the tone of painfully earnest, Hallmark-ready banalities, and the love story already feels thin at two hours, let alone three. However, Jessica Chastain’s performance is frequently cited as a bright spot, and many are curious to see if the original cuts will reveal “Them” to be a compromised cut rather than prove “Eleanor Rigby” an ambitious muddle.

“The Disappearance of Eleanor Rigby: Them” hits theaters September 12. The “Him” and “Her” cuts follow on October 10.

Chastain, who is also a producer on the project, is simply exquisite. There are only a handful of actresses who could have pulled this character off and Chastain clearly demonstrates she’s one of them.  Even though some might find Eleanor’s character selfish in her actions, Chastain find a balance that wears her depression well. She never plays Eleanor as incapable or overburdened. Instead, Eleanor is just trying to look in the mirror (a recurring theme) and discover who she really is at this point in her life. Read more.

But those are minor transgressions in a film that abounds in excruciatingly obvious, often precious, articulations of grief, where questions are schematically answered with more questions, and where armchair philosophizing volleys back and forth with punishing abandon. In one of few scenes that directly address the death of Eleanor and Connor’s child, Connor’s father (Ciarán Hinds), a fellow restaurateur, likens his departed grandchild to a shooting star that, while it only lasted a second, he’s so glad to have seen. “It’s a little Hallmark,” responds Connor, to which the audience may choke in laughter. This is, after all, a film that has Eleanor tearfully setting free a firefly from a mason jar given to her as a nightlight by her nephew, and where Eleanor’s father, a Yale professor played by William Hurt, likens tragedy to a foreign country, because “we don’t know how to talk to the natives.” Read more.

Writer-director Ned Benson is more eloquent when he conveys post-relationship pain through his shot choices. When Connor tails his estranged wife through the city, his rumpled, weather-beaten look contrasts with Eleanor’s sleeker appearance, while the camera’s distance from both of them emphasizes their disconnection. Later, a simple shot pulling away from McAvoy as he packs up his apartment fills in emotional backstory while keeping narrative exposition smartly minimal—the filmmaking equivalent of Chastain’s expert performance. In these moments, Benson’s uneven film comes alive with purpose, even as it stays rueful and downbeat. Without having seen the two-film version, it’s unclear whether the gender-segregated points of view would enhance that emotional intensity or create more redundancy in an already thin narrative. In this form, “The Disappearance Of Eleanor Rigby” tows the line between just enough and a bit too much. Read more.

Originally conceived and shot as a two-part, three-hour epic in the “Rashomon” vein—one feature following her perspective, the other his—Benson shaved off a cool 68 minutes and distilled the companion pieces into this digestible, wide-release CliffsNotes version. But despite the sparkling cast and engaging, well-tuned turns from Chastain and McAvoy, the scaled-down script doesn’t carry much weight, bogged down by clunky, Hallmark dialogue. The recut is light on flashbacks to Eleanor and Conor’s glory days, necessary to get a true sense of the title’s “them” and grasp what has really disappeared. Benson’s efforts have turned “Eleanor Rigby” into an accessible, garden-variety love story, and that’s its biggest problem. Read more.

It doesn’t help that Benson is a better director than he is a writer. In places, the script works nicely, but all too often the dialogue is overwrought and a tough clunky, straining for poetry but coming across a bit sophomoric. That Benson has such a great cast does a lot to disguise it: this lot could read the operating manual to the Hadron Collider and make it sound powerful. But it still prevents the film from really singing, and from landing the emotional punches it seems to he aiming for. It is very much a first film, albeit one of rare ambition, and there’s every reason to think that Benson will nail it next time around. Read more.

Like a relationship “Rashomon,” Benson wanted to show how even people who share a life will remember two very different versions of their past. And then the Weinsteins bought both movies and asked Benson to re-edit them into banality. In grafting the two, they’ve created a monster. Individually, neither Eleanor nor Conor thinks the other makes much sense. As a whole, they both seem nuts — when Eleanor’s quiet, he’s crying, and when Conor’s trying to soothe her, she’s unhinged. (And alone, they’re both vacuums.) In the first 10 minutes, Eleanor’s character swings so wildly that I assumed this was a portrait of manic depression. It isn’t, and it definitely isn’t a portrait of a couple we’re rooting for, despite “Them” assuming it’s a given that when we see two unhappy pretty people, we just want them to kiss and make up. Read more.