This Week on Home Video: 'Neighbors,' Polanski's 'Macbeth,' 'The Rover' and More 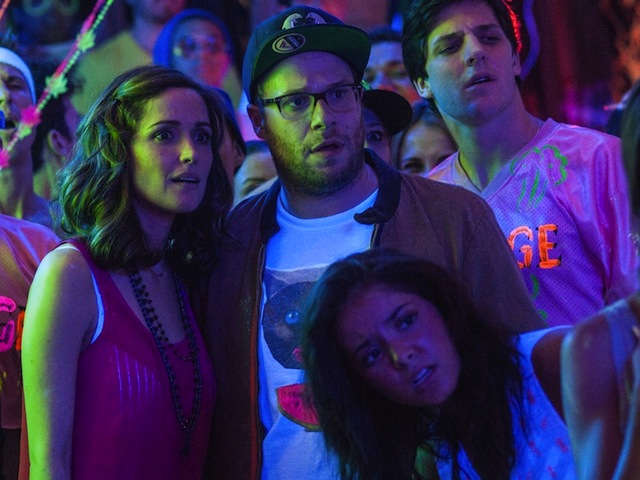 Classic literature turned horror is the theme of this week’s home video re-releases. The big one is Roman Polanski’s “Macbeth,” now on Criterion Blu-Ray and DVD. The Bard’s story brings out Polanski’s most pitiless side: it’s a doom and dread-laden movie that features one of the grisliest scenes of his filmography, the slaughter of Macduff’s family (which plays like an exorcism of Polanski’s own nightmares following the murder of his wife and unborn child). Polanski’s few liberties with the play, most notably in a coda that suggests the cycle of violence and betrayal will continue forever, only make the film more disturbing.

Criterion has a good companion piece to Polanski’s film out this week in Jack Clayton’s “The Innocents,” an adaptation of the Henry James gothic ghost story “The Turn of the Screw.” Deborah Kerr stars as a governess who learns the house is haunted and the children she’s watching are being possessed. Clayton’s expressionism turns the film’s idyllic location into a living nightmare, and Kerr’s increasingly desperate performance is one of her best.

New releases this week are highlighted by one very funny movie and one totally humorless one. Nicholas Stoller’s “Neighbors” gets a lot of mileage out of a war of wills between a frathouse and a not-so-grown-up couple (Seth Rogen, Rose Byrne), but the real ace in the hole is a never-better Zac Efron, who plays his frat leader with a dopey sweetness that suggests untapped comic potential from the actor. David Michod’s post-apocalyptic action film “The Rover” also features an unexpected performance, a mannered but committed one from Robert Pattinson as a simpleton who’s kidnapped by Guy Pearce’s grim loner; Pattinson’s tics are the only thing punctuating the film’s self-consciously dour atmosphere.

Other new releases this week include the ambitious but uneven sci-fi film “The Signal,” the teen drama “Very Good Girls” starring Dakota Fanning and Elizabeth Olsen, and Claude Lanzmann’s Holocaust documentary “The Last of the Unjust,” another companion piece to his landmark “Shoah.”

“The Last of the Unjust”
Criticwire Average: A-

The film is fundamentally a dialogue founded on mutual admiration, a quality Lanzmann foregrounds in the movie’s closing minutes. “The Last Of The Unjust” is demanding but fascinating, both as history and as an intellectual volley on the lure of power, the ambiguities of perspective, and the difficulty of claiming moral high ground in a context where matters of life and death are so precarious. Read more.

But Stoller, whose work I like — “Forgetting Sarah Marshall” and “Get Him to the Greek” were both funny and a little bit insightful — has a knack for delivering commercial comedy with some interesting detours and semi-improvised flourishes. Early on, when Mac and Kelly rehearse the way they plan to tell their neighbors to keep the noise down, a simple exchange builds and expands in ridiculous and clever ways. Read more.

“The Rover”
Criticwire Average: B-

Cinematographer Natasha Braier’s yellow-brown imagery engenders a gravitas far deeper than any of the movie’s slim developments. Instead, Michod relies on a series of basic vignettes. On more than one occasion, Eric and Rey engage in rambling fireside chats in between their adventures on the road. At one point, Michod’s camera slowly pushes in Pattinson as he sits in their parked vehicle, singing falsetto to Keri Hilson’s “Pretty Girl Rock” on the radio. It’s a random tangent that doesn’t deepen the proceedings or complicate the narrative in any particular way; like much of the “The Rover,” it’s a fragment incapable of latching onto a bigger picture. Read more.

“The Signal”
Criticwire Average: B-

The sudden detour into WTF territory piques your interest for a while. Eubank is especially adept at building tension in the film’s middle section, during which Dr. Damon cryptically interrogates Nic in windowless rooms that recall “2001’s” antiseptic interiors. Yet once we leave this claustrophobic space, things quickly fall apart…Read more.

Movies about female friendship are rare, so it’s dispiriting when one comes along, then hauls out the same tired plot in which both women fall for the same guy. “Very Good Girls” can’t even blame rampant film-industry sexism, as it was written and directed by Naomi Foner, making her directorial debut after many years as a screenwriter…Why she’d devote her energy to creating two young women defined almost entirely by their competition for a generic hunk is a mystery—though she’s at least made sure that the guy is even more boring than the girls. Read more.

This Article is related to: News and tagged DVD / Blu-Ray, Neighbors, The Rover, The Signal, Very Good Girls