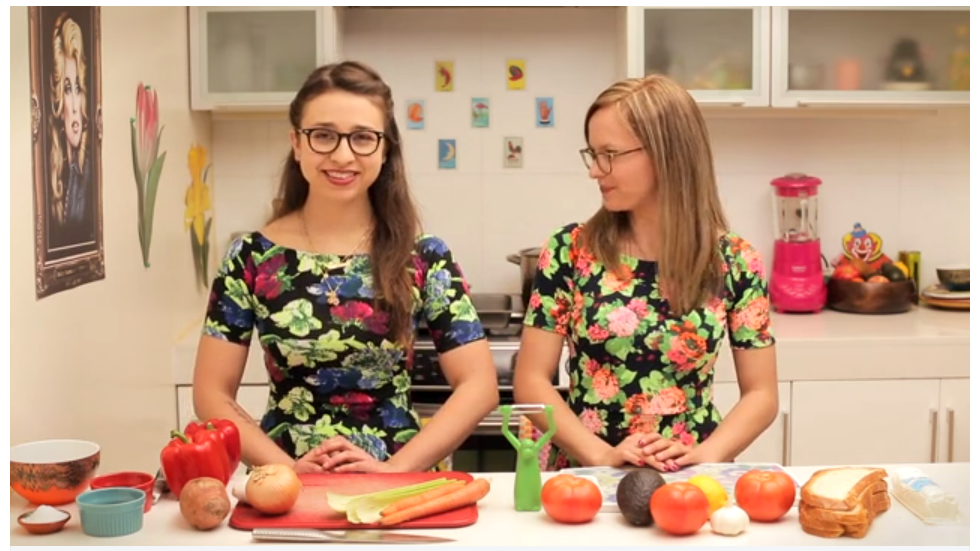 I’ve never been one for cookbooks. I read for work and found learning through images more fun. “Barefoot Contessa,” along with a few friends and family members, taught me most of my recipes. But a few years ago I grew tired of recording TV cooking shows filled with recipes for European meals I lacked the tools and ingredients for.

Luckily for fans of cooking series, the web creates a platform for a wide range of alternatives. Consider “Eat Our Feelings.”

Premiering this summer from Brooklyn-based co-creators Emma Jane Gonzalez and Sasha Winters, “Eat Our Feelings” breaks the TV mold: a hybrid sitcom/instructional series with segments for vegans, vegetarians and meat-eaters alike. Each episode features scenes with both women trying and failing at being single, young New Yorkers, making clear the tone: Just because you’re not perfect doesn’t mean you can’t cook.

“There is such a thing as eating healthy, well and deliciously and being weird and silly like a goober,” said Gonzalez, who is vegan and works as a personal chef in New York.

“Eat Our Feelings,” which just successfully reached its Kickstarter goal for funds to complete the first season, represents the next generation of the online cooking series. Its sitcom segments are tightly scripted and comfortably acted – its first episode is a Vimeo Staff Pick. Veteran web series creatives like Adam Goldman and Doug Anderson (“Whatever this is,” “The Outs”) also joined Gonzalez and Winters’ production team. Winters has co-starred in both of Goldman’s web dramas, and Gonzalez went to college to be a television writer. Goldman facilitated an introduction.

“The food has to fit the story,” Winters told Indiewire in an interview. “The narrative is pretty true to life and realistic, but in the cooking world anything can happen… You can do whatever you want, which is fun.”

Plans for future episodes include ones focused on brunch and a “real time” installment where the episode time matches the actual cook time. (In our interview Winters likened it to “24.” “The stakes are JUST as high,” Gonzalez joked.)

Proving Vimeo as a welcome home for indie artists, “My Life In Sourdough,” which premiered last year, has a similar structure to “Eat Our Feelings,” where the lead, Jeanne, played by NYU film graduate Marie Constantinesco, explores dating in New York through food. The series’ episodes alternate between scripted vignettes around food and lovingly photographed segments instructing viewers how to make simple, elegant dishes. It’s a beautiful and ambitious series with tremendous potential.

Vegan cooking series are still rare, but a new Chicago-based series from Inside the Artist’s Kitchen and Kiam Marcelo Junio, Filipino Fusions, instructs us on how to cook traditional Filipino recipes on a vegetarian diet. Junio hosts the show as their drag alter ego, Jerry Blossom. The series is light and quick, with music as delicious as the recipes.

Queer cooking is largely absent from television, but Filipino Fusions is not the first series from members of the communities. Hosted by “Feast of Fun” podcasters Fausto Fernos and Marc Felion, “Cooking with Drag Queens” has published episodes dating back to 2010. After collaborating with artists like Lola von Miramar (University of Michigan professor Larry La Fountain), the show has recently hosted guests from “RuPaul’s Drag Race” including Sharon Needles, Pandora Boxx and Jinkx Monsoon. “Cooking with Drag Queens” seriously teaches cooking but doesn’t take cooking too seriously, a level of camp uniquely suited to drag.

Shows like “The Curious Cook,” hosted by Athena Reich and Jase Grimm, demonstrate how casually producers could bring gay and lesbian representation to the cooking genre. In the show Reich and Grimm cook with noted personalities in those communities, including famed artist Penny Arcade, the creators of the black queer web series, “No Shade” and a number of drag queens.

If TV cooking is the place for perfection, most of YouTube’s homegrown cooking series feature styles from the fun (such as Rosanna Pansino’s popular channel), the funny (like YouTube megastar’s Hannah Hart’s “My Drunk Kitchen“), to the downright outrageous (juggernaut “Epic Meal Time”). VICE’s food channel, Munchies, features the network’s characteristically brash and engaging documentary work but is short on cooking instruction, aside from recipes on its website.

Smaller channels engage in hijinks too, of course. Tasted’s “Burger Lab” is “Epic Meal Time” for burgers. “Stand Up and Eat” follows Hart’s lead by bringing comedians to the kitchen, while in 2009’s “Cooking With Werner Herzog“ you can learn to cook from impersonators of film and pop culture’s most eccentric personalities.

Of the many outré cooking web series, Scifiriot’s “Sci-fine Dining” ranks among the most interesting and useful. Hosted by Ed Robinson and Jodi Younse, the series uses science fiction and fantasy narratives from “Star Trek” to the X-Men as springboards for inventive recipes for vegetarians and meat-eaters that “look authentic and taste delicious.” (I’ve already passed it on to my culinarily-challenged partner, a “Star Trek” fanboy.)

The beauty of internet distribution today is its lower barriers to entry, so I’m certain we’ll continue to see innovations in the genre. This month, Felicia O’Dell, a.k.a. Auntie Fee, rocketed to YouTube — and network TV — fame as America’s “realest” chef. Videos spread for many reasons, not all of them good, but I read social media excitement over O’Dell’s videos as a collective desire to see represented the unglamorous reality of cooking off-camera, in our imperfect kitchens.