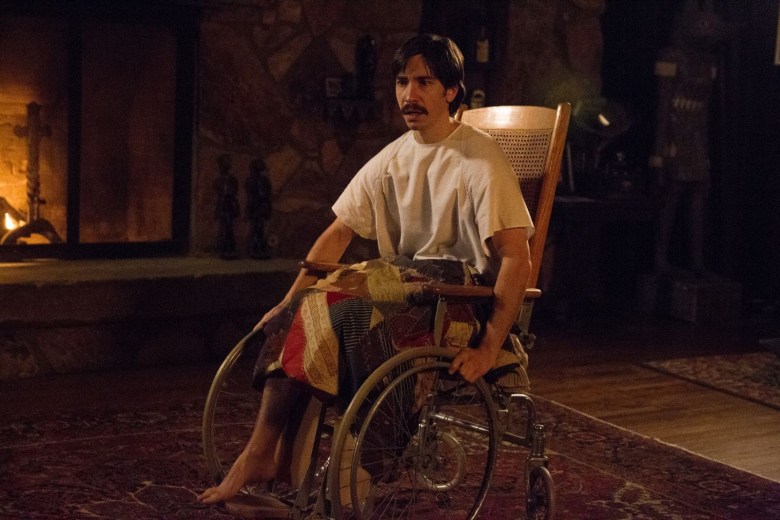 Something weird-ass this way comes,” announces one of the raunchy podcasters in Kevin Smith’s “Tusk,” and boy, he’s not lying. Smith’s follow-up to the change-of-pace horror-action-satire “Red State” takes a far wackier turn down genre-bending road, though it’s no less eager to please with its mayhem. An irreverent spoof of obnoxious Americans and good-natured Canadians that careers into body horror, “Tusk” is all of over the place. But despite its ludicrous turns, the movie benefits from the far-fetched events for its sheer willingness to go there, not unlike Smith’s goofy, self-deprecating public persona.

Based off a premise proposed on Smith’s podcast with producer Scott Mosier in which a man gets turned into a walrus, “Tusk” alludes to its origins by focusing on a character who runs a loudmouthed podcast himself. That would be Wallace Bryton (Justin Long), the garrulous co-host of the cheekily-titled “The Not-See Show” with his best pal (Haley Joel Osment). After the duo single out a viral video featuring a young man’s violent accident in Manitoba, Wallace decides to pay the guy a visit for a segment on the show, much to the consternation of his needy girlfriend (Génesis Rodriguez). Once up there, Wallace finds the young man out of the picture, and instead gets ahold of another character residing two hours into the wilderness. At an isolated mansion, he meets the creepily eloquent Howard Howe (Michael Parks, his second psycho role for Smith following the maniac preacher in “Red State”), who shares eccentric seafaring tales from decades past before taking Wallace captive for his nefarious agenda.

Up until this point, “Tusk” unfolds with a lighthearted tone, taking playful stabs at Canadian friendliness (“We’re not kind, we’re optimistic,” says a border patroller) and contemporary media culture. While it never ditches the goofy vibe, once Wallace gets kidnapped, the story shifts into an embellished captivity narrative both distinctly unsettling and patently absurd — think “The Human Centipede” by way of Roger Corman.

The grotesque physical transformation forced on Wallace is too outrageous to spoil here, but one character nails it: “One fuck of a bummer to look at.” Needless to say, makeup artist extraordinaire Robert Kurtzman, whose credits range from “Evil Dead II” to “From Dusk Till Dawn,” does not disappoint. At the midnight premiere of the movie at the Toronto International Film Festival, virtually every cutaway to Long after Park’s character messes with his prisoner’s body inspired nervous laughter at the ridiculous spectacle. But it still manages to generate a palpable sense of fear for its sheer twisted execution.

Even once “Tusk” arrives at this point, it still has surprises in store, as Wallace, his friend and lover journey to Canada in search of the missing man and join forces with an idiosyncratic Canadian investigator played with goofy relish by no less than Johnny Depp. Virtually unrecognizable beneath a handlebar mustache and a cross-eyed gaze, Depp’s wacky performance marks his most successfully diverting turn since the first “Pirates of the Caribbean,” but goes to far stranger extremes. Just as John Goodman arrived around the mid-point of “Red State” to energize its proceedings, Depp shows up to remind viewers that even as “Tusk” turns into a preposterous horror-thriller, it’s anything but lacking in self-awareness.

With his last two features, Smith has finally liberated himself from the restrictions of writing the soul-searching chatter of average Americans that has tarnished expectations of his output ever since “Clerks.” Though the cheery energy of his storytelling remains in play, a sense of the unexpected prevails. It’s not exactly a great movie, but the fun, kooky nature of its proceedings never let up.

Unlike the overextended genre ambitions of “Dogma,” these later efforts showcase his energetic, carefree voice without forcing the material toward any grand statement. Notably, no matter the peculiar direction he takes, Smith remains a committed filmmaker, relying on cinematographer James Laxton (“The Myth of the American Sleepover,” “Medicine for Melancholy”) to intensify the shadowy lair where Wallace gets held captive, and complementing it with menacing exteriors of the hulking mansion in the woods. Wallace is undoubtedly screwed, but Long plays such a convincing pompous jerk that by the time he falls into this situation, the experience of watching his ill-conceived project backfire in such hideous fashion arrives with a naughty thrill.

Not every tangent works as well as the inspiration for the oddball plot. Even as Depp delivers an amusingly off-beat caricature of French-Canadian speech, he doesn’t quite earn all the meandering screen time he receives. The fiery-eyed Parks remains an excellent choice for the lunatic role, though his craziness is essentially a one-note gag that wears thin after all the cards are on the table. Ultimately, the premise works better than its overall execution, and the climactic showdown arrives in a rushed fashion that almost feels like Smith just wanted to get it done so he could arrive at the oddly poignant finale conceived on the podcast.

Still, that it even manages to get there says something about Smith’s ability to handle the material even as it flies off the rails. It’s counterintuitive to scrutinize the story flaws of a movie so married to each preposterous moment. If nothing else, it’s endearing to watch Smith push his competent skills as a writer-director in idiosyncratic directions without negating his capacity as an entertainer. At its roots, “Tusk” is a comedy about the process of eliciting shock and laughter from audiences by pushing both tones to their extremes. Only a director with the ability to play with those elements could have pulled them off. Conceived as part of Smith’s proposed “True North” trilogy, “Tusk” provides the latest indication that the director has finally managed to become a truly unpredictable filmmaker.

But that doesn’t mean he’s far from home. The movie’s credits feature a snippet of the podcast episode where the director and Mosier laughingly dreamed up the “Tusk” premise and encouraged listeners to vote on whether they wanted the movie to happen (#WalrusYes prevailed). At the end of the day, the movie’s very existence is essentially a wink to that arbitrary origin story, which means every scene unfolds like a wink to the audience. “Tusk” seems to have been made for the people who demanded it, which suggests the fan-loving Smith isn’t so far from his roots after all.

“Tusk” premiered in the Midnight Madness section at the Toronto International  Film Festival. It opens in limited release on September 19.